Body of a Poem: You Cannot Make Home In A Lie

You are here: Home / Archives / Featured / Body of a Poem: You Cannot Make Home In A Lie

Presence teaches me, through all complexity—this mass and mess of body animate with breath—that gender is irreducible. i can remember not having it, or not feeling captive of it; remember wrapping myself in sheets that draped my legs, kissed the floor, caught wind and fluttered natural; can remember clenched fists and tenors admonishing me to man up; remember failing to maintain up, drowning down the why in brown liquor, cheap beer; and even now, reel bitterly, peeling myself back layer after layer, this geologic pain in search of. Everyone’s singular body is plural; we struggle against the multiplicities of birthright, home, and negation to find and fit—safe, still, here.

My gender is feminine. The queerness of my gender speaks possibility—body and body’s language, the kind of question, quandary, or plentitude that circles back on itself forever. i experience my human as Non Binary Trans Feminine, or rather use those words to hold place, to say this is what my body knows, the lens through which i focus curiosity, desire, confusion, hope, fear, and. Though labels are nonsensical in relation to Non Binary identity, words can also provide temporal tether through experience. i’m always Non Binary, always Transition, finding roots, wisdom, direction, inspiration, and interruption beneath the cultural, somatic umbrella of the feminine. Plurals can’t begin to capture it. To know oneself as Non Binary is to relate devotionally with unfixed possibilities.

My body, my movements, my poems, my communities create and sustain the possibilities for further transitioning. i think this true of Trans GNC pplx—we are ecosystems, becoming.

i’m a writer, lover of language and literature, yet am suspicious of language, afraid of capital L Literature.

No sooner do people become unhinged from the white, colonial—categorical, cisheteropatriarchal normative, than everything shifts. Worlds literally collapse, in bodies as in bodies of work. Here we find radical, speculative futures, as well as specters, hauntingly alive of the past.

Languages and syntaxes for Non Binary (and, i suggest, Trans and GNC) literatures do not, and, by definition, cannot fully exist. They are always sites of fluctuation and futurity—threads, linkages, disturbances, resistances—within mutable ecosystems. No one artist or school of makers, no single journal or editor can or should be relied upon to define, curate, or articulate them, for to defy the violence of stone (read a body, named, read institution, read complicity) categorization is to move in the world as material and hypothetical, dreaming intersectionals. It’s about bodies—plural, complex, also banal—not zero sum games of stature, influence, codification, the violent geography of binaries.

Our bodies are languages—what they hold, survive, how they move. Our mutabilities, syntax. Literatures are extensions of our selves and communities. Transition is forever.

Literature—oasis, behemoth, albatross—presents us with a fundamental problem of being in civilization: one (or many) must name themselves, or not, the choice curated from somewhere beyond reach. At this point, it seems the Literary world is made of niches, subcategories breaking off from a seemingly sacred and preserved whole. Hence, hyphen plus category equals bell jar on bookshelf, always falling back on the Canon line. It’s not so simple as “good” or “bad”—we can revel in the fact that there are becoming more and more rooms and resources for voices of not-white men. But Literature and its institutions—its canons—exist within and mirror something much larger and uncanny, a monstrous ecology fixated on essential fixation. i wonder how our non-normative genders, let alone our poems, can thrive here, and how we might re-vision the containers.

That Trans, Non Binary, GNC lits constitute a niche within a greater field of literature is indicative of what, exactly? The existence of niches. But a niche itself is a false container for instabilities within an idealized whole that’s always already unstable. A micro illusion acting as scaffold, maintaining the constantly crumbling façade for theaters of violence. Set within the dailiness of colonialism, white supremacy, police brutality, the murders of (largely) Black and POC Trans Women, the written word, agriculture, etc. (things that are and are not the same, or, eruptions within notions of being in particular time)—what is maintained? Who is given life, and at what cost?

Much is maintained, many are given as well as denied life, and the cost is outsized of anything comprehensible.

Seeing or not seeing Trans GNC work circulated, the makers themselves compensated and community needs actively engaged by parties with resources is part and parcel of aforementioned cycles. Let’s be clear: the Literary Community (and institutions in general) has absolutely failed to celebrate or compensate for the brilliance, complexity, ingenuity, the raw vitality of Trans GNC work—especially the work of Black and POC Trans Women. It’s isn’t news, and it’s endlessly wearisome.

Connecting niche (rendered such through the violence underwriting the term itself) to canon is a task best approached with justice and reparations in mind, for what is the superstructure containing the structure, and does our very existence as gender diverse people undermine its claim to normalcy, legitimacy, ascendancy, authority, the right to name names? Absolutely. Trans, Non Binary, and other GNC voices in literature (like Black Voices, Indigenous Voices, Disabled Voices, Poor Voices, and more) will cause Literature (rooted in supremacist lineages) to do as all structures taken as given, fixed, and ontologically sound (including your gender) will inevitably do: succumb to movement.

That literary and publishing institutions have been unwilling / unable to accommodate space, resources, or (honestly) much integration to Trans and GNC writers, as well so many other othered human beings, is inseparable from exclusions met in the greater civic world. If we can’t use the bathroom that matches our gender, can’t exist in public space absent some degree of constant fear, how can we expect our poems to be read? If we’re so disposable, how will our work have value outside of itself? In joining established literary / publishing circles, are we shouting across fallow fields in a ruinous network of agricultures seeking to keep movement at bay? Who benefits, and are we being used to keep closed loops sealed?

So yeah, i’m suspicious of big-Literature. But what am i even saying? i want us there and i don’t, and am uncertain what to do with that. There’s so much tension, so much i’m leaving out in the privilege of wondering, not least of which being daily contexts looking different for you than for me. i want people to eat, want gender spectrum artists compensated, want us thriving against all odds, want people reading and engaging with our work. i want us to nurture and share our stories—including the banalities you might think you’re uninterested in, the parts that aren’t just about our parts or pain, our bones and names—and those too. Who is allowed to make art not grounded in the body?

Trans, Non Binary, and other GNC writers hold the resilience, the unsettledness, the scope of vision to interrupt structures, not only in the literary world, but in those we dream and sustain daily. Our bodies aren’t merely sites for projection of hetero sensational spectacles, violence, and tragedy. i want us to fuck with everything—a lot of life depends on it.

But i’m in a circle here: with whose tools? whose stability? i’m suspicious, confused, holding only questions, fragments, suggestions, leading me back to my gender, my body.

Where in your body is responsibility housed? Are you engaging with the necessity of complicating your positions? How will you carry and comport your contexts? Did you ever have choice in the asking?

i scour literatures looking for someone recognizable as me. An erasure of already invisible ink.

That’s not totally true. i find parts of myself everywhere. White parts. i’m in the language, the lineage, the binding. In cities of publication: Paris. New York. San Francisco. London. The spine that supports, firmament of my body, my gender i keep poeticizing.

A much as i live by and for language’s tenacity to make space for witness and motion, i fear its power to other, codify, institutionalize—to create an our from irreducible contexts.

i, too, have fallen under a privileged spell, a lack of knowing: be wary my use of our. Who is this our? To be Trans GNC and a writer is to be of a kind, and also, not. Queerness isn’t shield. People are variously suited to fall back into traps of racism, classism, elitism, heteronormativity, all ecologies of destruction. Where are you?

As for myself, i’m a Trans writer, also a white writer, modestly published, embarking on an MFA program. There’s something both real and intellectualized regarding my fear of institutions, their benefits and dangers—held in my gendered body, but in so many ways absent from my racialized one. All of it tangle, mess, my trans, my literature—the reason i go to Trans and GNC writers foremost, scour blogs and poetry sections in stores, comment “following” on Facebook threads where Trans GNC writers engage, share resources, names, readings, critique, sustenance, rage, the ways we make mistakes and try to work through them—community against a constant backdrop of negation.

Presence teaches me that one cannot make home in a lie. My femme gender confirms this. If one tries, othering, violence, denial will be one’s foundational tools. What has this got to do with gender multiplicity, support and representation in literary worlds, let alone agriculture? Perhaps i’m stretching, or perhaps the changes needed ask us to stretch beyond points of breakage. i’m skeptical of gates and gatekeepers, of closed ecosystems that have so othered Trans and GNC artists and expression in the first place.

Literature: give us ample space in your journals (not just niche issues), on your editorial committees, your payrolls. Give us teaching positions and provide courses surveying our work. Ask us what we need before you move to serve us up—we do not exist to validate your previous invalidations. If the gender binary equals patriarchal violence, and institutions are invested in upholding the powers underwriting them, then Trans GNC lives, voices, visions, constitute promises of revision. i hope we’ll be both willing and supported, manifesting outside these closed loops currently holding us in.

Let us trouble our sense of us, our us’s troubling your you’s.

Bodies are languages—what they hold, survive, how they move. Our mutabilities, syntax. Literatures are extensions of our selves and communities. Transition won’t be 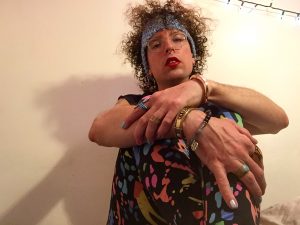