Report from the Field: Gender Inequality Within Literary Prize Culture

Prizes aren’t everything. But for literary writers in a world growing less literary, they just might be. Ivor Indyk states that literary prizes function ‘as the last bastion in this world for the literary recognition that is withheld by the marketplace.’[1] Which is why it is all the more pertinent that we begin to address the issue of gender within these awards.

Although women read more than men and books by female authors are published in roughly the same numbers, they are vastly overlooked for prizes in comparison to male authors. A recent proliferation of data on women in the literary arts has provided remarkable insight into current trends. In a 2015 study, novelist Nicola Griffith (Hild, Ammonite) looked at 15 years worth of data from a few top literary prizes. She found that fiction written by women about women won hardly any prizes, and fiction by women about men fared a little better. Books by men about men were miles ahead.

[2]I did my own quick study of the most lucrative prizes for literary novels in the UK over the last decade and found that men had won 94 of them whilst women scraped around two thirds of that at 64 (and that’s mainly because the list included the Bailey’s Prize for Women).

What is causing this disparity? Author Kamila Shamsie explains: ‘Like any effective system of power – and patriarchy is, over time and space, the world’s most effective system of power – the means of keeping the power structure intact is complex. One area in which this complexity can be examined is via literary prizes, which carry increasing weight in a book’s chance of success.’[3]

So what are the reasons for this gender bias and what we can do for a more equal future?

Before I began my research I was fairly optimistic: good news about female literary writers kept appearing and it seemed like they were finally being recognised for not only writing good fiction but for setting new standards for the rest. The Bailey’s Women’s Prize for Fiction, brought about in response to the sexism of the (rather appropriately titled) Man Booker Prize, has had a big role in bringing them to our attention. The judges have been consistently good at awarding experimental authors whose novels resist the boundaries of contemporary fiction. In 2015, Ali Smith’s How to be Both won the prize for exploring ‘our humanity with the most beautiful poetic prose’[4] and the previous year saw Eimear McBride’s A Girl is a Half-Formed Thing, take the prize for dazzling the judges with an ‘unconscious railing against the world.’[5] Last year, Lisa McInerney blew the judges away with her less experimental but certainly uncompromising debut, The Glorious Heresies.

The Costa Book Award 2016 shortlist was dominated by female writers. And although only four years old, The Goldsmiths Prize has been awarded to women for two of those years: Ali Smith and Eimear McBride for the same books as The Women’s Prize and perhaps for the same reason: in Chair Judge Blake Morrison’s words, ‘the Goldsmiths prize for fiction has a different agenda: to reward and celebrate the new.’[6]

A similar development is the growing trend in ‘avant-garde chick-lit.’ The female experience is often relegated to the realm of ‘chick-lit’ and women therefore have to partake in a kind of psychic transvestism in order to read good art. ‘Avant-garde chick-lit’ is an antidote to this, celebrating the feminine experience and all its ‘insistently girly features’ using experimental techniques.[7] It is possible this has come about as an offshoot of the growth of ‘middlebrow’ literature in recent decades: initially used as a derogatory term by modernists to describe the watering down of high-brow culture, it has been reclaimed in recent years by postmodernists whose works are typified by the blending of high and low culture.[8] As with middlebrow art, ‘avant-garde chick-lit’ is more prevalent in the US where novels such as Chris Kraus’s I love Dick paved the way for the likes of Miranda July, Lena Dunham and Alexandra Kleeman. But it’s starting to creep into the UK mainstream too with TV series such as Fleabag and Catastrophe at the fore.

On closer inspection, it seems women still have a long way to go for equality within literary prize culture and my earlier assertions begin to lose some of their sheen. Is a prize solely for women really a good thing? Nicola Griffith points out, the Bailey’s Prize could turn into a prison, becoming the only prize women win.[9] And whilst it’s great that the Goldsmith’s Prize was awarded to two female writers, couldn’t they have picked women who hadn’t already won many of the prizes that year? There doesn’t seem to be such a wealth of female prize-winners as there are male. Equally, McInerney may have won the Bailey’s last year, but she has said, she was often told ‘how “male” it was, and that it was “no wonder its jacket sported quotes from male writers.’”[10] This is not surprising. According to an article by Natalie Kon-Yu, ‘more often than not, when a woman wins a major literary award, she wins for writing like a male writer, for writing about men, or for setting her work in an unmistakably masculine environment.’[11]

Adversely, although the avant-garde chick-lit movement is a very interesting one, its feminist stance is still marketed in a very girly way.[12] Vanity Fair embedded its discussion of Kleeman’s book with an interview about eye make-up, and Vogue followed her through the cosmetics aisle of a local pharmacy. Chris Kraus’s seminal text has recently been turned into a rom-com starring Kevin Bacon as the eponymous ‘Dick.’

Perhaps my hunch was wrong. Thankfully, in the last few years some have recognised the need for more data and less hunch regarding women in the literary arts, and have started collating it. One such person is Griffith, who said she does not believe there is ‘male’ or ‘female’ writing. ‘There are male and female writers, and female and male characters, but there’s no such thing as a ‘male’ book,’ she said. ‘I am wary of suggesting to women that we must write about women; I believe all writers should be free to follow their own path. However, I also believe many women find women less interesting to write about because they have absorbed the cultural lesson that women are less interesting, period.’

Danuta Kean agrees but admits, ‘There is a perception among publishers and others in the literary establishment of writing by women that denigrates the subject matter. So men can write about the home and it is universal, but women doing so becomes “domestic.” This is sexist and fails to recognise that the home is the crucible for all personalities.’

If we have established there is no difference between male and female writing, what is causing the bias towards men within literary prize culture? Kean questions the bias, noting there has always been bias towards white male writers ‘because there is still a perception that this group speaks for all society.’ She also noted that many believe women will buy books written by and about men, but men won’t buy books written by and about women. ‘The bias in literary prizes reflects what is published, entered and promoted in the literary genre,’ she said.

Part of this promotion includes reviews–women also aren’t reviewed as much as men—and the presence of women working in publishing–men have started taking the top jobs again; literary publishers who are more likely to submit books for literary prizes and reviews take on more men than women;[13] and books by men are more likely to be submitted for prizes. Sarah Churchwell, a judge for the 2014 Man Booker Prize summed it up: ‘We read what publishers submit to us … [If] publishers only submit a fraction of women, then that is a function of systemic institutional sexism in our culture.’[14]

In an interview she did with The Guardian, Griffith argues agglomeration is partly to blame for this regressive behaviour: ‘The publishing landscape has changed (corporate ownership, consolidation, big chains). This led to scarcity – fewer independent publishers and editors with individual taste, fewer authors being promoted by their publishers, fewer unique buyers at fewer retailers, fewer review slots. Scarcity leads to conservative behaviour.’[15]

The good news is small publishers in the UK are starting to win prizes and many in the US are rushing to women’s aid. Dorothy, YesYes Books, and Graywolf Press have made it their mission to publish more women.[16] Similarly, the #readwomen movement inspired many publishers and publications in the UK to publish and review more women and Kamila Shamsie even proposed 2018 be the year of publishing only women.[17]

So what else needs to happen for a more equal future? Kean said everything needs to be challenged, ‘We need to challenge the way that literature by women is covered… the way books are reviewed and marketed… the idea of women as ancillary rather than main characters and the idea that home settings in literature mean parochial.’ Griffith agreed, ‘Nothing will change until we begin to dismantle [culturally erected barriers]. This must be tackled simultaneously from multiple directions: at home, in the media, at school, at work. All of it, all at once. I think none of this will happen until people begin to collect data at every level and then testing the variables. Without understanding what the inflection points in this process are we can’t nudge the system with any real hope of positive change.’

Despite how it may look, women still do not have a room of their own. They are still struggling against a deeply ingrained patriarchy and present trends indicate that much of the gender inequality is down to unconscious bias happening at every level. We cannot deny what is happening in schools, in agencies, in publishing houses, in the media, in shops, in people’s homes. We need to surrender the illusion that any of us are objective, rational beings because 80-90 percent of our cognition is unconscious.

This is ironic considering a literary novel is nothing if not an objective, multi-sided depiction of one narrative, full of stereotypes and their counterexamples. Literature requires that we depart with our subjectivity–our ego–temporarily in order to inhabit someone else’s. However, my experience and research show that women are better at this than men. No, not better. More accustomed to doing this. Just as BAME, LGBT and disabled people are accustomed to having to do this because the world is saturated with art by white, able-bodied men.

Perhaps all literary prize judges should judge blindly. Perhaps agents, editors, publishers, and booksellers should all judge blindly. It may not be a stretch to ask that children at school read blindly, teachers teach blindly, buyers buy blindly, until the whole world becomes blind. And perhaps when we finally open our eyes again, we’ll see all the clearer. 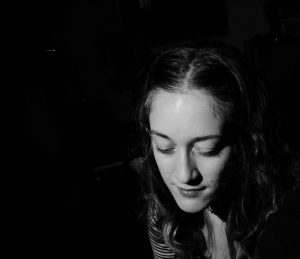 SHARIFA PETERSEN is a writer and artist living in London. She has just finished an MA in Creative Writing for which she completed her first novel, supervised by Will Self. Some of her work can be found here: sharifapetersen.wordpress.com

[6] Morrison, Blake. “Blake Morrison on the Goldsmiths Prize for Fiction: ‘There Are Still Things to Say That Haven’t Been Said Before'” Point of View. Guardian News and Media, 11 Nov. 2016. Web. 16 Jan. 2017. https://www.theguardian.com/books/2016/nov/11/goldsmiths-prize-mike-mccormack