Where We Go From Here: Writers Who Remember Freedom

You are here: Home / Archives / Featured / Where We Go From Here: Writers Who Remember Freedom

You say you are my ally, stand up! Brush yourself off. There is no time for tears, for self-pitying platitudes.

There is a rich, racist, misogynistic man who wants to lead us. He is not my leader. He doesn’t speak my language nor does he want to learn it. I am an indigenous, two spirited grandmother. My ancestors survived Andrew Jackson when he ordered our removal from our homelands. “Walk,” he said, and some walked the Trail Where they Cried to Oklahoma. Many died walking. My family hid in the Great Smoky Mountains. Lived in caves and made themselves invisible until they could intermarry with whites and “pass.” They survived. They refused to walk.

I am 72 years old and I stand. I stood for Civil Rights in the 60s, for peace against war in the 70s and 80s, and I am still standing for Oceti Sakowin in North Dakota today. I stand for Missing and Murdered Native women all over this land. I stand with anyone who will face danger to protect our sacred waters and this planet from its destruction by greed and the disregard for life. I stand with them. Don’t ask me to walk again. I am done.

After the initial explosion of the news that this country would be led by ultra-right white men, the debris has begun to settle. We learn that the President has surrounded himself with his children and inexperienced billionaire “good ole boys” to form an administration in which people of color, immigrants, LGBTQ individuals, and women will have no voice. We don’t have the luxury to retreat into sheltered silences. I am a writer of both fiction and poetry. It would be easy to step back into my stories and let the younger people fight this fight. But in good conscience I cannot. The stakes are too high.

Yesterday, I gave a reading at the Institute of American Indian Arts. I was prepared to read from my new novella set on the reservation where I lived before moving to Santa Fe. My first book Sweetgrass Burning: Stories from the Rez was well received. And who doesn’t like a good story? But instead, I read poems I wrote a decade ago that spoke of 9/11, the “Patriot Act” and atrocities that were perpetrated against Muslims and people of color in the name of patriotism. They had been written in the time of the Bushes and smelled very much like Trump time.

I wrote: “A full blood Cherokee woman is killed in Tulsa by a car full of young white men screaming ‘Arab Go Home.’” They crushed her against a wall with their car when she tried to talk with them. To tell them she has never left America. That her ancestors have lived in this land since time began.” This could have been written today.

I also wrote: “A dangerous tide rises. It knows no boundaries. A young brown skinned woman is detained on a cross country flight. Her body is searched for weapons, her bags emptied. She is forced to deplane. Her grandparents immigrated here to work the fields. Two generations worked on their knees. She is the first in her family to work standing.”

Donald J. Trump has opened up a Pandora’s box of racist and misogynist attitudes and behaviors. Already in the first days after his election, children as well as adults are victims of  injustices ripe from Trump’s basket of deplorables. As writers, we must write it out. Tear off the veils, air the rotting fruits.

As Ursula Le Guin predicted when she recently received the National Book Foundation’s Medal for Distinguished Contribution to American Letters, “hard times are coming.” She spoke eloquently: “…we’ll be wanting the voices of writers who can see alternatives to how we live now, can see thorough our fear-stricken society and its obsessive technologies to other ways of being, and even imagine real grounds for hope. We’ll need writers who can remember freedom…”

Today I am hanging winter scarves, hats and gloves from a fence at a nearby cemetery where I know homeless people congregate. I am practicing radical hope; a hope that is directed towards future goodness.

It is left up to all of us, but especially to writers to, as LeGuin suggests, recognize real grounds for hope. To call it out and to demand that we are heard.  We must  write it out. 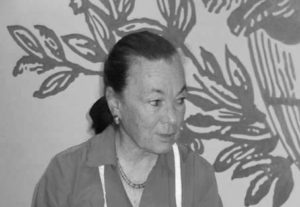 BARBARA ROBIDOUX is the author of two books of poetry, Waiting for Rain (2007) and Migrant Moon (2012). Her fiction has appeared in the Denver Quarterly, The Yellow Medicine Review, The Santa Fe Literary Review, and numerous anthologies. SWEETGRASS BURNING : Stories from the Rez a collection of linked short stories was released by Blue Hand Books in February 2016. She lives in Santa Fe, New Mexico where she is a candidate for an MFA in creative writing at IAIA and is currently at work on a novella. Barbara is of mixed-blood Eastern Cherokee and Italian heritage.

Portions of this essay have previously appeared in The Rumpus.