What Happens When You Switch a Character’s Gender?

You are here: Home / Archives / Featured / What Happens When You Switch a Character’s Gender?

Once I wrote a story about a woman who grows a baby in a pot. Thumbelina-style. The woman throws out a dead cactus in a terra cotta pot, plants and waters a seed she mysteriously finds, and “The next morning the barleycorn had grown arms. Dirty, rootlet-covered, lumpy little arms like two carrots except beige, reaching out of the dirt, reaching up like, Hold me. Like, more milk, please.” This plant baby was inspired by my love of fairy tales and particularly by the delightfully creepy mandrake in the film Pan’s Labyrinth.  I love the surprise when the little girl slips what looks like a giant piece of ginger into a bowl of milk, feeds it a few drops of blood, and—wonder of wonders—the root squirms and begins to coo.

In Pan’s Labyrinth, the little girl hides the magical mandrake under her mother’s bed in hopes of healing her, and I’m sure the mother-daughter element in the film also attracted me. My own daughter had just gone off to college, and I was left with all the usual complicated emotions.

When I thought I was finished with the story, I sent it out on submission. After a few months, all the publications I’d tried had rejected it. That didn’t deter me much, I know how hard it is to sell a story, and I resubmitted. But I sent it out multiple times, over close to a year, with no luck.

While I brooded over my plant baby’s failure to thrive, I read Nicola Griffith’s essay exposing the literary prize preference for male main characters over the past fifteen years. Griffith writes, “When women win literary awards for fiction it’s usually for writing from a male perspective and/or about men. The more prestigious the award, the more likely the subject of the narrative will be male… At the top of the prestige ladder, for the Pulitzer Prize, women wrote zero out of 15 prize-winning books wholly from the point of view of a woman or girl. Zero.”

Zero. And then my story was rejected for the umpteenth time, and I thought, F’ it, and all in a huff I changed the main character in my story to a man: “There Once was a Man Who Longed for a Child.” I literally did a find and replace search in Word. The only other details I changed were that the man drinks a beer on Saturday nights rather than a glass of red wine, and when eating alone, the man chooses ribs and an omelet with ketchup rather than pasta and ice cream. It took me about half an hour to make the changes. I chose four literary magazines I admired, and still hot and bothered, submitted.

About three hours later, I received a long and generous acceptance email from Kara Black, an editor at Joyland. Three hours. Fastest acceptance in my entire life.

My first thought was Yes! Woot, woot! But my second thought was: Unconscious bias rears its ugly head. Of course, there is nothing scientific about this anecdote, nor does it prove particular bias in the brilliant editor Kara Black; after all, she had never seen the original version. I recently emailed Kara to ask her thoughts on the gender switch. She answered, “I’d like to think I would have loved the piece just as much, if not more, if the protagonist had been a woman. Though as you note there’s no way to know.” Kara’s right, in my case we’ll never know for sure, but even disregarding my anecdote, Nicola Griffith’s evidence is persuasive: there’s more perceived literary prestige in a man’s point of view than in a woman’s.

So, what should women and nonconforming gender writers do with this information? Click find and replace in word to change all our points of view to male? For me, the idea of continually writing from a man’s perspective only to gain literary prestige and acceptance is a really depressing, self-defeating one.  In Michelle Tea’s devastating and hilarious speculative memoir Black Wave, the author decides that her own perspective, working class, queer woman, needs to be more universal to be successful. But when she tries to change her ‘self’ into a successful white guy, she “quickly became bored.” Tea drops the universal idea, because her real desire is to “free them all, all the girl writers.”

And, of course, the answer is not simply to put more women on prize committees and in publishing, because women hold unconscious biases, too. Including feminist women like me.

When I actually re-read my fairy tale in which I’d switched genders all in a rush, my first thought was, Wow, this really pops, but then my second thought: Is that my unconscious bias talking? Or, could it be that in this case a mother going through empty nest syndrome is perhaps less surprising than a single dad who feels both liberated and lonely when his daughter leaves for college? Perhaps the scenes of this single father “feeding” his plant baby milk and singing lullabies are fresher. As editor Kara Black sees it, “the juxtaposition of mothering and manhood here is how it challenges our preconceived ideas about who cares about nurturing, who knows about nurturing, and who’s entitled to do it.” Of course, it’s annoying that we don’t take scenes of a man caring for a baby (plant) for granted, but we don’t, or at least I don’t. I had never thought to write a nurturing scene like that from the point of view of a father.

When linking up the stories in my forthcoming collection, True Love and Other Dreams of Miraculous Escape, this past year, I kept in mind that the genders of characters could change. I realized I had a story about a single mother whose personality was very similar to the man who longed for a child. I named the main character of both stories Isaac. In the process of changing my single mother into Isaac, I came upon a scene in which the main character bursts into tears, then cries themselves to sleep. I felt a strong urge to erase those tears, now that the character was a man. In my hesitation, I came straight up on my own gender biases. In my family, many of the men cry “easily,” yet my first thought was that though an adult male character might shed a manly tear or two, he can’t “burst” into tears and cry himself to sleep. I kept the scene. Even though I identify as an ardent feminist, I realized that I had my own gender biases that could be short-circuited by switching characters’ genders. In the final linked collection, one of the men became a woman as well, but there are still six stories with female main characters and only five with male main characters, so I guess no Pulitzer for me. Still, for me this was a liberating process.

Switching the gender of a main character can be like planting a mysterious seed. Who knows what will grow? A flower? A baby?  A monster? The answer might be surprising. 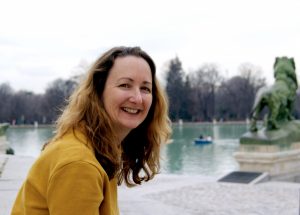 MICAH PERKS is the author of a book of linked short stories, True Love and Other Dreams of Miraculous Escape, and the novel What Becomes Us, winner of an Independent Publisher’s Book Award and named one of the Top Ten Books about the Apocalypse by The Guardian. Her memoir, Pagan Time, tells the story of her childhood in a log cabin on a commune in the Adirondack wilderness. She is also the author of We Are Gathered Here, a novel, and “Alone in the Woods,” a long personal essay. She has won an NEA, five Pushcart Prize nominations, and the New Guard Machigonne 2014 Fiction Prize. More info and work at micahperks.com