Barbara Hamby’s poetry class changed my life. I’d been pursuing an MFA in fiction at FSU, and I decided that my out-of-genre workshop would be the genre that scared me the most–poetry. Barbara structured the course around reading other writings by poets as well as their poetry (i.e. we read Emily Dickinson’ letters, Anne Sexton’s letters, Sylvia Plath’s journal, the letters between Elizabeth Bishop and Robert Lowell, etc.). Every week, when it was time for me to write a poem for workshop, I panicked. I looked through my old journals, panicked some more, read a mashup of poems, panicked, ate, panicked again, and finally sat down and forced myself to write words that eventually, through numerous drafts, became a poem. Seeing the poets as normal people who sometimes wrote about subjects close to them or sometimes wrote about topics absent of the personal taught me there wasn’t a single path to creating a poem, except, of course, reading a lot and writing a lot. In Barbara’s class, I dug into myself. I grappled with religion, specifically Islam, sex, the idea of God, blackness, growing up in Newark, my complicated relationship with America, my existence. Poetry allowed me an “in,” a way to explore subjects I had difficult exploring via fiction. When I had my one-on-one with Barbara and she talked about possible publication, I balked at the idea. “What would my parents think?” I asked. (Yes, I asked this at the age of 29…) She reminded me that I was a writer and that I had to decide if I wanted my writing to enter the world or stay locked away, unseen. It took a couple of years before I became confident enough to send work into the world. Even when I received my first poetry publication, I told my parents but did not send them a link. They Googled me and found it anyway. And even if they might not 100% agree with the things I write about, they have been and continue to be fantastic and supportive. Also, after Barbara’s class, I (obsessively) kept taking poetry classes.

Gah! I still consider myself relatively young and still trying to emerge, but I really want to answer this question.

1) Believe in yourself. The writing world needs you. We need you.  Don’t be afraid.

2) Surround yourself with positive people. I cannot emphasize this enough. There are people out there who want to see you fail. Once you start doing well, you’ll hear whispers, “Well you only won because you’re ABC” or “Well, of course, they published you because they needed someone who was ABC.” There are days when those whispers get into my head, when I’m crippled with self-doubt and I question “Do I belong here?” “Do I deserve this?” “Did I only win this because I’m ABC?” It can hurt your whole creative process. It’s especially hurtful when those whispers come from other marginalized people, those who have subscribed to this idea that there’s only a limited amount of space for us and internalized the belief that if you get something, you have taken something away from them. Go back to #1: The writing world needs you. You need to surround yourself with people who support your work and believe in you.

3) Remember the old dictum: yes, you will have to work twice as hard to be considered half as good. Just keep working. There are people who paved the path for me to be here and I hope I’m paving the path for others. And I hope you will pave the path for those behind you.

How do you feel about recent conversations about “literary success,” prize culture, personal brands, and the idea of “poetry business?” What are the best ways to support poets and poetry?

I think poetry is in a great place right now. I know there have been rumblings about “bad” poems / poets, but I think it’s great that poetry is touching so many people. I grew up around a lot of spoken word (not performing…but I was lucky to watch my cousins and others perform numerous times at the Nuyorican Café), and I always saw poetry as something that you did as a hobby, saved for late-nights, but never as a career option. I think it’s great so many kinds of poetry are available for public consumption. My best friend texts me poems she likes, my mother will mention a poem she heard by a Muslim poet; friends who, at one point, didn’t “understand” poetry before are buying poetry books now. It’s so important for people to see themselves and those who look like them represented in art.

I do wish there was less emphasis on age. There’s so much emphasis on the next young thing that, as someone who is about turn 34, I feel old! The rational side of me understands that age doesn’t matter as much because, at the end of the day, it’s about the work. But still! Sometimes it hurts when you want to enter a contest, but you can’t because you’re over the required age to enter. I think it’s important for people to understand that age and emerging are not synonymous.

This poem by Kathy Z. Price up at the Cincinnati Review is excellent. It tackles seeing and what does it mean for the black body to be seen and respected / disrespected. I keep repeating the last lines to myself, “the jawbone of an ass, perform the cross, wavering cellophane across your face, all your clothes removed, when we dare you to see what we see.” 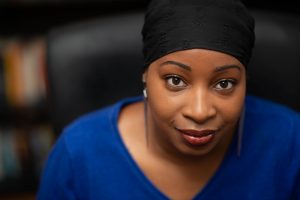 SAKINAH HOFLER was born and raised in Newark, New Jersey. In 2017, she won the Manchester Fiction Prize. Previously, her poetry has been shortlisted for the Manchester Poetry Prize. Her work has appeared or is forthcoming in Mid-American Review, Hayden’s Ferry Review, Philadelphia Stories, and elsewhere. A former quality and chemical engineer for the United States Department of Defense, she’s currently a PhD student and Alfred C. Yates Fellow at the University of Cincinnati.