I think there’s so much pressure on young writers today. Social media has been such an amazing tool to spread the work of contemporary poets, and so writers are becoming stars in way that is both amazing, and also very intimidating if you’re just getting started. Especially as a marginalized person, seeing the work of poets that reflects your experience can be so freeing, but then there’s also that kind of internalized doubt that stems from the ways we are tokenized by structural powers. I know there have been magazines in which I’m the only black person. And it’s getting better, but having that type of invisible pressure can make you think, Well, there’s only enough room for a few of us, so maybe writing what I think they want to read will get me in such and such magazine. It’s such an ugly feeling. When you’re an unpublished writer, it’s easy to feel like you’ll never get published, and the more you publish, the more pressure there is to keep publishing and stay relevant. I’ve had so many great mentors since I’ve been in New York, and they’ve all given me advice on how to stay grounded, but ambition can be an artist’s greatest hurdle in becoming who it is you’re meant to be. But one piece of advice that really stuck with me was from David Tomas Martinez. He said, “You only need one poem to be remembered forever.” That made me really sit back and think, ok, even if I’m allowing my ambition to rule my actions, if I really want to have a long, fruitful career as an artist, I’d do better to focus on writing the poems that only I can write, instead poems written for the gaze of the existing power structure. My advice? Keep reading, take your time, and always do you. The squares will eventually catch up!

The simple answer is that it might be for them. I can’t control how people feel. I remember reading this poem from this anthology to my classmates and feeling all the air leave the room. There was just silence. I felt like I had to apologize. But the thing is, my mother has had to go through so much worse than what’s in this poem, and if it makes some white people so uncomfortable to see a portrait of how structural white supremacy affects the everyday lives of non-white people, I don’t know what to say. Read what you like. Don’t buy my book. I don’t really care. It’s 2018, and last week my brother got called a nigger right to his face in his place of business. I’ve got much bigger problems than whether or not my work upsets people. It should upset people. But I guess my question would be, Are you really more invested in protecting your own childish innocence than you are in promoting social change and growth? If so, great. I could rattle off a dozen writers who write about their deep thoughts while fishing, or “how meaningless life is” if that’s what you’re into. I don’t think I’m entitled to anyone’s approval. But so many people reached out about this poem to tell me how much it resonated with their own experiences, to a degree I couldn’t believe. And in a way, it hurts. It’s unfair. But Baldwin, in “The Artist’s Struggle for Integrity,” wrote, “You must understand that your pain is trivial except insofar as you can use it to connect with other people’s pain; and insofar as you can do that with your pain, you can be released from it, and then hopefully it works the other way around too; insofar as I can tell you what it is to suffer, perhaps I can help you to suffer less.”

I will always try and honor these words.

This is always my favorite question! In 2018 I’ve devoured The BreakBeat Poets Vol 2: Black Girl Magic, which has incredible lineup, featuring Safia Ehillo, Angel Nafis, Morgan Parker, Raych Jackson, and so, so many amazing poets. I also really loved the collections by Fatimah Asghar, Terrance Hayes, Kyle Dargan, Adeeba Shahid Talukder, Logan February, and fiction books by Tommy Orange and Jamel Brinkley. I always find myself going back to Jericho Brown’s The New Testament, but there are so many other writers who are doing amazing work: Kemi Alabi, jay dodd, Matthew Gellman, Tova Benjamin, Raven Leilani. Basically, all of my friends! But one poet the world needs to know is Karisma Price. Right now, she’s on the verge of becoming one of America’s most important poets, and I want to be on record as the first to say it. She’s an absolute prodigy. I’ve known this since the day I met her, but now the world is getting introduced to her work. She’s only 22, she’s already a Cave Canem fellow and finishing up her MFA at NYU. She was just on Narrative Magazine’s 30 Under 30 list. I feel so blessed to be her friend and collaborator. Do yourself a favor and read everything she’s ever published. Create a Twitter and follow her. You’ll be transformed. 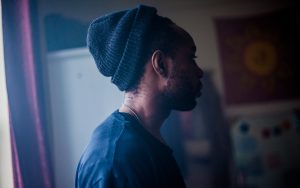 KWAME OPOKU-DUKU is the author of The Unbnd Verses, Vol. 1 (Glass Poetry Press, 2018). His poetry and fiction are featured in BOAAT, Massachusetts Review, BOMB, Gigantic Sequins, Booth, and elsewhere. Kwame lives in New York City, and along with Karisma Price, he is a founding member of the Unbnd Collective.