How do you practice self-care when writing about a difficult subject matter? What brings you joy?

I’ll answer the question about joy first: laughing. Laughing at stupid stuff. Like slapstick humor. Like not-cute-anymore-can’t-get-air-into-my-lungs-deep-belly laughing. Just funny shit. Also cartoons. I couldn’t fucking feel joy for a really fucking long time and I’m just now learning how to give myself permission to let it enter my body again. I don’t know if that’s “self care” or not, but it makes me happy and I don’t ever want to lose the ability to feel happy again.

When writing about a difficult subject matter, I wait until I can write the poem without falling apart or jeopardizing my health and well-being. I want to be brave and take risks in my poetry, and I do that best from a place of stability. Lately, I’ve just needed an abundance of time and love and care to get myself on steady ground again. I can write about difficult subject matters as long as I have a stable place for my mind to come back home to.

How does pressure to be legible as successful and productive in accordance with American norms affect the creative process?

It almost ruined me. I think I’m still fighting to prevent it from ruining me. I think worrying about those kinds of things can damage your relationship to your own writing—at least it did for me. It took a toll on my writing and my creative process and my relationship to my peers. People always talk about not competing with other writers and how there’s room at the table for everyone and I think those are wonderful ideas to work toward. But we live in a country that assigns moral and cultural values, along with material resources to relatively narrow ideas of “success” and “productivity”—so genuinely unlearning the ugly manifestations of those things takes real work. It takes time, and work, and grace, and a willingness to grow.

Being anxious and bitter all the time is lonely and will literally give you ulcers and probably bad skin. So I’ve had to retrain myself on things that I used to take for granted before—things like remembering why I write and who I write for, like the basics of friendship and love and community, like caring for and opening up to people who care for and open up to me, like refusing comparisons that rely on disparaging yourself or another person. Listen, capitalism will suck your joy dry. Limited ideas of success will rotten your work. Comparing timelines and achievements can sap your joy and make it impossible to celebrate and enjoy even the best things. I have to work on myself every day to not lose the kind of person and writer I want to become with a sustainable creative practice that works best for me.

I caught up with my friend Sasha Banks a few weeks ago over the phone and aside from very generously and lovingly feeding my spirit, she shared this extended metaphor with me about treating your creative project like a mountaintop that you have to keep moving towards. I can’t explain it with all the conviction and sincerity that she did, but for anyone reading this who needs a reminder: keep moving towards your mountain. It doesn’t matter if no one else can see it. It doesn’t matter if the peak is cloudy right now or if other people are sprinting toward theirs while you’re stuck trying to figure out how to get across the big ass swamp in front of you. Find a way across the swamp, and keep moving toward that mountain.

How do you feel about the ongoing debates concerning “writing outside of your identity?”

Honestly, I think they’re silly and vague, particularly on the internet. I think most people aren’t going into those conversations with the actual question in mind. Like, it honestly seems like most white people are just trying to very loudly demonstrate as publicly as possible how super not racist they are. I understand the impulse, but that has less to do with the question and more to do with how public digital spaces impact our interactions. Also, the internet stresses me out so maybe I’m just biased.

But generally speaking, I think if someone wants to write a poem that requires them to falsify identity-based experiences in order to write the poem—they’re probably about to write a poem that lets themselves off the hook. There’s probably a much harder, more self-incriminating version of the poem that they’re avoiding. Be brave, hold yourself accountable, and write that poem. I don’t mean be self-deprecating, I mean make the commentary you want to make and be genuine about your lens. You can lie to the reader about what you see, or you can tell the reader the truth about what you see, but your lens will be biased and present regardless.

Also, for me, in my own teeny tiny writing world, “writing outside of your identity” is about me not letting myself off the hook with my own poems. Just because I’m black doesn’t mean I get to be lazy in my work and rely on cultural markers that don’t apply to me. Just because the rest of the world doesn’t have the wherewithal to consider black people multiplicious doesn’t mean I get to pretend I’m not a first-generation black American who was raised in a middle-class white suburb—especially when we look at the way so many markers of low income black experiences have been manipulated. I love black people too much to be that lazy or opportunistic.

We’re living in a police/surveillance state. How has this affected your approach toward poetry, art, persona, and personal presence? How do we negotiate and assert our multiplicitous selves in a surveillance state that requires us to be fixed, legible, and containable?

My first inclination is to think of living in a surveillance state in a very literal sense. So, like, when I publish poetry about mental health, I’m also thinking about how that might be used against me if the state ever wanted to discredit me or take away my agency. Or if I write a poem that recounts a specific Ferguson protest I have to think about not legally implicating myself or anyone else in activities that might be considered “criminal.”

I’ve also been thinking about Dareen Tatour, a Palestinian poet who was convicted and sentenced to prison in Israel over the summer for a poem she recited on YouTube. I’ve been thinking about how her poem’s resistance-focused lyrics are similar to poems that my peers and I have written and published—hers is even milder in some ways—and then also how the U.S. and Israel are best friends and likely share similar nationalistic definitions of “democracy.” I’m also thinking about the FBI’s leaked Black Identity Extremist identifier and how that might be weaponized to a larger extent in the future. All of those things have been in my head lately when I read and write poems. But I’m also somewhere between a realist and a chronic worrywart, so take all of that for what you will.

If writing has been a historical instrument of our collective undoing, how do we move forward as practitioner of that undoing?

If by “a historical instrument of our collective undoing” you mean that it’s been used to disempower people?—then I blame humans for that. I blame white supremacy and patriarchy and capitalism and all those overbearing terrible things that ruin perfectly good things.

As practitioners, it’s our job is to wield our writing in honor of the things we want our work to be in honor of. And there are plenty of writers who want to honor things or ideas that disempower wide portions of us. But writing is just a tool or a weapon or a hug or a pair of shoes. As practitioners, it’s our job to be deliberate and careful and brave and honest, or at least be constantly moving and working towards those things.

How can we emphasize the insurgent content of creative work while also celebrating and developing form? How can we do this without losing the work’s character to binaristic structures of convention?

I’m not sure if I fully understand the question, but I think it would be helpful to think of form as an opportunity for possibility rather than a status symbol, maybe? I don’t think insurgency and form are necessarily at odds. There’s a deep richness both inside and outside of “form,” and all kinds of possibilities in both.

Rebelling against convention doesn’t always have to be the mere lack of it. Rebelling against form doesn’t necessarily have to be just…not using form, you know? I think it might be worthwhile to consider insurgency differently, regardless of whatever binary or hierarchy exists when we’re talking about form and convention. I want to think there are more ways to destroy hierarchies and power imbalances than simply flipping them. What if we take the hierarchy and twist and torque it, or pinch the edges and pull them out until it’s a pancake, or distort it so it has all these corners and edges instead of being a linear ladder? What does the writing look like then? What does insurgent, creative work look like when you refuse to let the hierarchy obey its own shape?

I don’t personally want to disregard form. I want to learn about writing in different forms and how to be strategic with my line breaks and all those different technical things that I haven’t had the opportunity to explore yet. But for me, learning those things is about increasing my agency as a writer and adding more things to my toolbox. I want more strategies to pull from or disregard, more things to model or distort—and I want to be able to manipulate those techniques on purpose. And I have absolutely no intention of not creating rebellious work while doing that. So. 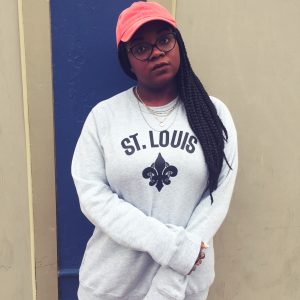 JACQUI GERMAIN is a St. Louis-based poet and freelance writer, with work appearing in The Offing, Muzzle Magazine, The New Inquiry, Broadly, and elsewhere. Her poetry often involves an excavation of history and memory, attempting to challenge linear assumptions of time, progress, power, and experience through an intimate lens. She is author When the Ghosts Come Ashore, published in 2016 through Button Poetry/Exploding Pinecone Press, and has received fellowships from Callaloo, the Poetry Foundation’s Emerging Poets Incubator, and Jack Jones Literary Arts.