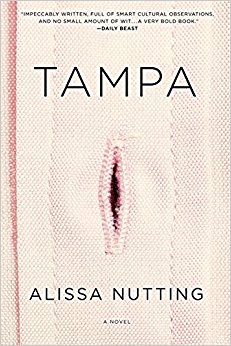 I just started Alissa Nutting‘s Made For Love. I loved Tampa. I love novels. I’m about halfway through Aziza Barnes‘ i be, but i ain’t. The density of their talent is pretty unbelievable. It’s an a-few-poems-at-a-time kind of read for me. Next on the list is Lynn Melnick‘s Landscape with Sex and Violence. I’m going to review it before its October release. Today I listened to Hanson’s first album. Which came out 20 years ago! Not much of a TV watcher, but I do love food documentaries.

I want the world to know about Sara Watson. She is my favorite poet.

I’d love to collaborate with heroes like Eileen Myles and Denise Duhamel. And heroes like Marisa Crawford. I’m also really into Morgan Parker and Alex Dimitrov. Amorak Huey, too.

I was unable to be myself, and certainly unable to write as myself, until I came out. I remember being in my first poetry workshop in college, winter quarter of my sophomore year at the University of Cincinnati, January 2008. Don Bogen’s intro to poetry workshop. I would write unrequited love poemy stuff on the regular. And it felt so fucking real. And authentic. And then I would change the “shes” to “hes” before I turned anything in to be workshopped. That felt wrong to me. It felt destructive. So that feeling, that hiding, it sort of sat with me that term. Sat heavy on my chest, on my conscience.

I spent 2008 slowly coming out to close friends. The next term, spring, I took an intro to women’s studies class. The instructor was a PhD student (who also happened to be a poet). She was the first stranger I recall coming out to. In a homework assignment I told her I thought I might be bi. She told me, in her comments back, that she was bi and gave me some info about a support group on campus, Genderbloc. I did a lot of writing and reflecting in that class outside of the realm of my sexuality, which I was also coming to terms with for the first time in a concrete way. I began to learn about reproductive rights and abortion (I spent 12 years in Catholic schools prior to college). I began to pay attention to how people of color are constantly violated in in the work force and on the street. I began really understand why it dangerous it is to have women’ and trans’ bodies. I began to think critically about power structures. I began to get angry. I began to feel deeply hurt and moved by the information I was learning, at 20, for the very first time. This flipped a switch in me or something. I suddenly had a desperate desire to be myself because I was becoming convinced that though there were risks involved with that (i.e. personal safety), it was okay to be. It was at this point I began the process of not being sorry for being queer. It became important for me to become visible.

That fall I moved out of my parents’ house in the suburbs. I signed up for another poetry workshop (with Erica Dawson, who I took two workshops with, who is the reason I kept writing poetry). I went to a Genderbloc meeting. And it was full of queer people. I had never been around any queer people. At the meeting we sat a at table and everyone introduced themselves and stated their pronouns. I followed suit, but had never been asked before what my pronouns were, had never even thought of the word “pronoun” outside of a middle school grammar lesson, certainly not in the context of identity. I fell in love with a girl named Caroline. That day. Actual love at first site. And I took that shit to workshop, those feelings. And I asked her out. And everyone in class knew I was a woman who loved another woman. As a 21st birthday gift to myself, I told my tea party conservative father, who, for Christmas that year, gave me a Catechism (as mentioned in my Bettering poem). I’ve been writing about the complications that come with love, heartbreak, queerness / identity, and a strained relationship with my father, with the world, ever since. Sure, making art about this stuff is difficult, but it’s got nothing on the time I spent hiding, holding it in.

Practicing self-care while writing about difficult subject matter is, to me, the same thing as practicing self-care while writing. For me, all the subject matter I cover is difficult to some degree. While much of my work is certainly celebratory, good art is laced with tension. And the seams should be always on the verge of bursting. Kneading that tension in the process of making a poem is always difficult. I try to practice the same kinds of self-care during the time periods when I’m writing as I do during the months that go by when I’m not writing. Now that I am no longer in an MFA program and am working full time, writing hasn’t been much of a priority lately. Very recently I’ve become more accepting of the fact that I’m not a robot. I forgive myself for not writing everyday, or for whatever other notion gets in my head about what I need to do to really “be a writer.” Food prep and cooking (though I’m not a great cook) is a big part of my life. So is running. I make time for those things, almost always at the expense of writing time. I pet my cats. I play basketball with my friends. I make lists. I go for walks. I try to take things one day at a time. I try to reflect, even briefly, a few things I’m grateful for daily. I think that’s maybe what brings me the most joy. Taking time to recognize how fucking lucky I am to be able to take care of myself and the people close to me. Sometimes, amidst all of this, a poem happens. And when it does, I’m grateful for that too.

I used to. I used to think I am not a “political” writer because current “political” events / controversies are never at the heart of my work. I am not writing about climate change or why I think eating animals is unethical. I am not writing about reproductive rights or about the constant danger the bodies of uterus-bearing people are in. Not directly. Even though those things are important to me. They are things I think about A LOT. However, while writing, I am always trying to navigate my surroundings through a lens of kindness, to write from a position of empathy, and I think that in itself is political. It’s taking a stance. There is so much we have little to no control over. We don’t always get a say in what happens to us, but we always have a say in how we respond to our situations and the environments we find ourselves in. This is why I think all art is political; art is an expression of some form of the experiences we’ve had, fractions of beauty and anger and love and loss that we’ve grappled with, that we’ve sat with, and the lens we choose to view that through, that effects what comes out. Related, I think walking down the street as a visibly queer person is political. The space I take up and the spaces in which I am silenced–that’s political, too. 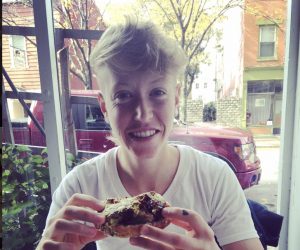 LISA SUMME was born and raised in Cincinnati, Ohio and is a recent graduate of Virginia Tech’s MFA program. Her poems have appeared or are forthcoming in Vinyl, Waxwing, Lambda Literary, Salt Hill, and elsewhere. Her manuscript, Theoretical You, is a YesYes Books 2017 Pamet River Prize semifinalist. She currently lives in Pittsburgh, PA. You can follow her on Twitter @lisasumme.