Poetry’s best ambassador, poet and friend Kaveh Akbar tweeted a request for people’s favorite first lines of poems the other day, which sent me back to so many old loves. I re-read Li-Young Li’s The City in Which I Love You, Pablo Neruda’s On the Blue Shore of Silence (translated) and Suheir Hammad’s breaking poems. I’ve also been reading Layli Long Soldier’s Whereas and Solmaz Sharif’s Look, two breathtaking works. I love Marwa Helal’s poems, and I’ve been working on poems in the Arabic form she has created, which invite a kind of attention to the weight of words that should always be at the heart of writing poetry. That’s a form of collaboration, right? I’d be thrilled to work with Marwa any day.

I didn’t share my writing for a long time because early on I had been in many environments in which writers with authority felt comfortable challenging identity under the guise of critique. And I also live in-between languages and as a citizen of two cultures that sometimes confound one another. It was a journey to make peace with the notion of writing in English and figuring out how that English needed to work for my poems. Writing is my first home, though. My grandfather was a renowned Jordanian poet, and my earliest and happiest writing memory is of sitting in his study and writing at his desk on summer vacations in Amman.

I probably don’t practice it enough. I’m getting better at it because I have more of poetry community over the last few years. The rituals of daily life help to re-center me and bring me joy. I love to cook and reclaim old family recipes. Time with my family, listening to their stories, travelling together as often as possible.

I have never understood that luxury. I just reject the notion that a human being can take the time to create a work of art and it somehow hangs in this vacuum devoid of context and outside of the time and place in which it was created. The privilege inherent in that notion is quite staggering. Writing about geraniums is as political as writing about war. The writer is choosing to locate themselves vis-à-vis the world they inhabit. I think it’s also a lazy critique. Writing about the trauma of war is not “political” for one who has survived it. Writing about geraniums amidst a war is a “political” act for one who is trying to survive. 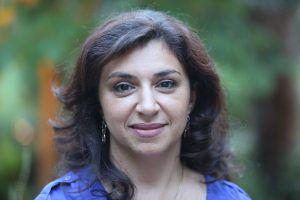 LENA KHALAF TUFFAHA is an American writer of Palestinian, Syrian, and Jordanian heritage. She holds a BA in Comparative Literature from the University of Washington and an MFA from Pacific Lutheran University. She writes poetry, essays and literary translations. Her first book of poems, Water & Salt, is published by Red Hen Press. She is the winner of the 2016 Two Sylvias Prize for her chapbook Arab in Newsland. Her poems have been translated into Arabic, Greek, Hebrew, Italian, Norwegian, and Spanish. She has been published in International and American journals including Kenyon Review Online, diode, Al-Ahram Weekly, Barrow Street, Hermeneutic Chaos, Black Warrior Review, Alaska Quarterly Review, Massachusetts Review, and Winter Tangerine. Her poems have been nominated for the Pushcart Prize and Best of the Net, and anthologized in books including Letters to Palestine: Writers Respond to War and Occupation and the forthcoming Halal If You Hear Me. Lena is a Hedgebrook alum and a proud member of RAWI (Radius of Arab American Writers). You can learn more about her work at www.lenakhalaftuffaha.com.