Anything can be activism, broadly construed, and the rhetorical abuses that ensue from this are dangerous. Corey Robin’s work has shown us that conservatism is itself a kind of activism; seen from the other side, doesn’t “Make America Great Again” fit the same basic category? There might be a more fruitful way to think about how poetry fits into all this. Over the last two years, I taught variations on the “poetry and activism” theme in my classes, and my students and I eventually broke it down into three categories: the instrumental (e.g. reading poems outside the White House for the “We Belong Together” Kids Caravan campaign); the discursive (e.g. poems by Haunani-Kay Trask on the subject of Hawaiian sovereignty, perhaps with formal and linguistic considerations that also give the poems a “style” of sovereignty); and the methodological (e.g. Remi Kanazi telling campus chapters of Justice in Palestine coalitions to conceptualize their organizational strategies as they would the movements of a poem). The last category was a revelation for us, because it took us to a place where political events, or the poem as event, could be more than content, more than objects of “use.” We all understand intuitively that poetry can be activism, can have meaning and impact beyond the literary genre. But the bigger question that emerges for me is: Can activism be poetry? In other words, can our engagement with the public sphere conjure the kind of sensuality that brings us, as readers of the world, to a quieter kind of world? Remember what Cornel West said: “Justice is what love looks like in public.” And compare D.H. Lawrence: “The profoundest of all sensualities is the sense of truth and the next deepest sensual experience is the sense of justice.”

How do you feel that writers can engage in topics of oppression and violence without falling into tropes of exploitation? Can editors or curators further disenfranchise marginalized writers?

Exploitation is not a trope but a relation. My poem in this anthology was the seed for my book, Goddess of Democracy, which orbits the exploitation of the 2014 Umbrella protests in Hong Kong. I got involved in the protests while there on a Fulbright grant—as an outsider who disappeared into the crowd and was mistaken for a local student—and the book is a struggle with the complexities of privilege, the limits of solidarity. To put it more abstractly, the poems are an exploration of pronouns: how far the lyric “I” or “we” can take us, to what degree the third-person is an objectification, whether the lyric “you” can offer genuine empathy or merely casts a shadow of the same old self. My hope for poetry is the transformation of such relations.

Marginality, which gets used as a trope, is another relation. The relation is not fixed. Consider the example of a scholar here in Hawai‘i, who had described the islands as a kind of “Asian American nation,” and was later shaken awake by an activist’s reminder that this description was erasing the ongoing indigenous struggle. It was horrific for me to realize that “hapa,” which we now understand to mean half-Asian/half-white, actually comes from the Hawaiian term hapa Hawai‘i, meaning half-Hawaiian. Here, the “marginalized” Asian American identity is no longer coalitional, but rather is constitutive of privilege. Hawai‘i is a curious case in which the triumph of the oppressed immigrant has also meant the rise of neocolonialism. It’s been sobering to live in a place where the acting government has actually acknowledged itself to be illegitimate (see the Apology Resolution of 1993), and where I’m constantly reminded of my own complicity in global systems of oppression. Perhaps it’s helpful to pause and disenfranchise ourselves a bit before undertaking any larger projects. Are we writing to be more human, or to build more nations? Can one erasure correct another?

Writing better means living better. If you pause from your desperation to make a living from it, you might actually learn to make a life out of it. White noise can’t be overcome with more white noise. Read comic books—especially One Piece. No, what do I know? I’m young and emerging, too. 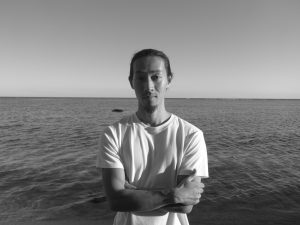 HENRY WEI LEUNG is the author of Goddess of Democracy, which was selected by Cathy Park Hong as the winner of Omnidawn’s 1st/2nd book contest in 2017. He is also the translator of Wawa’s Pei Pei the Monkey King (Tinfish, 2016). He earned his degrees from Stanford and the University of Michigan, has been the recipient of Fulbright, Soros, and Kundiman fellowships, and recently dropped out of a PhD program to spend some time with his wife farming on the island of Keawe.