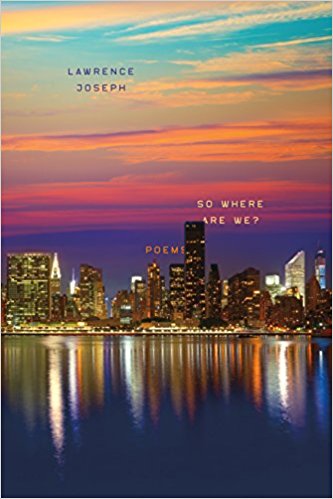 Right now, I’m reading two books: the manuscript of Lawrence Joseph’s new book, So Where Are We? and Homer’s Odyssey.

Joseph’s last book, Into It, came out twelve years ago. The wait was worthwhile. I’ve said it before and will say it again: Lawrence Joseph is one of the most relevant poets writing today. You can trust his voice and vision to navigate through the havoc of the twenty-first century and what got us here in the first place.

Homer’s Odyssey is a post-war poem, a poem of trauma, memory, and the return home—of having to overcome insurmountable odds and monsters in foreign lands. In this way, the epic is a poem of our time. Every world leader turning away refugees should read this book.

Emerging writers to know about: Jess Rizkallah (her first book, the magic my body becomes, won the inaugural Etel Adnan Poetry Prize, which Fady Joudah and I selected) and Marwa Helal (you already know about her; she’s in Bettering American this year).

New writers: Russel Swensen (he’s got a chapbook, Santa Ana, and a full collection, The Magic Kingdom, both from Black Lawrence Press). You know how Charles Bukowski thought most other poets sucked, especially those from Los Angeles—I think he would’ve thought the complete opposite of Russel Swensen.

My cat Albert doesn’t give a shit about what I think of poetry, or much else. He may be on to something.

HAYAN CHARARA’s three poetry books are Something Sinister (2016), The Sadness of Others (2006), and The Alchemist’s Diary (2001). He edited Inclined to Speak (2008), an anthology of contemporary Arab American poetry, and his children’s book, The Three Lucys (2016), received the New Voices Award Honor. With Fady Joudah he is series editor and founder of the Etel Adnan Poetry Prize, which published first and second books of poetry, in English, by poets of Arab heritage. Born in Detroit, he lived in New York City for many years before moving to Texas, where he teaches at the University of Houston.