Do something that makes you enough money to live well, if you can. Poverty fucking sucks. Poverty has always been my greatest barrier to writing and reading. Find a way to sustain your financial and social life and your mental health so that you have time to read and write. Come to every poem wanting to play, to work, to feel, to experience something new. Try to surprise yourself with your poetry. Try to outwrite your favorite poets, whatever that means. Don’t take things too seriously. Don’t care about awards or prestige. Read widely. Read frequently. Be kind to yourself, they’re just poems. 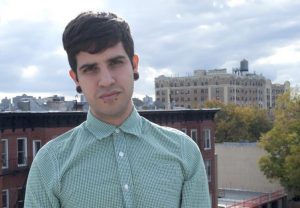 CHRISTOPHER SOTO aka Loma (b. 1991, Los Angeles) is a poet based in Brooklyn, New York. He is the author of Sad Girl Poems (Sibling Rivalry Press, 2016) and the editor of Nepantla: A Journal Dedicated to Queer Poets of Color (Nightboat Books, 2018). In 2017, he was awarded The Freedom Plow Award for Poetry & Activism by Split This Rock. In 2016, Poets & Writers honored Christopher Soto with the Barnes & Nobles Writer for Writers Award. He frequently writes book reviews for the Lambda Literary Foundation. His poems, reviews, interviews, and articles can be found at The Nation, The Guardian, The Advocate, Los Angeles Review of Books, American Poetry Review, Tin House, and more. His work has been translated into Spanish and Portuguese. He has been invited to speak at university campuses across the country. He is currently working on a full-length poetry manuscript about police violence and mass incarceration. He co-founded the Undocupoets Campaign and worked with Amazon Literary Partnerships to establish grants for undocumented writers. He received his MFA in poetry from NYU.