I read Zami when I was fifteen. Here was an author speaking parts of me–this work was a mirror I hadn’t understood I’d lacked. I read Audre Lorde‘s clarity as permission to take a critical look at myself and to recast my own lived experiences as valid, useful and important. Zami gave me language to name the profound love and loyalty I feel towards other women, particularly women of color, romantic or not. And Lorde’s centering of Black womanhood was and continues to be a necessary model as I navigate my own identities as a Bronx-based, queer Cuban-American poet.

Remembering to center my self, in her complexity, is not a static or fixed act. It’s not a thing done once that will be done by itself in perpetuity. I do strive towards self-articulation every time I write, think, and speak. It is always difficult, but of these three, writing feels the most luxurious because it allows for revision. It’s scary for me but also healthy to look back to older work and see clearly where my thinking was less developed, to encounter a younger version of myself reaching towards articulation. Writing requires bravery–similar to the vulnerability required of anyone who chooses to love another person–to forego convention and acceptability in favor of committing to the unknown. But even a thing written and revised will rarely if ever represent a permanent truth. We change, the world changes, we and others introduce more language in order to recast and challenge, to see better or differently. And so on.

All forms of closeness with people I love is first; then, tending plants, moving my body around (dancing! running! boxing!), playing with my friends’ little kids, making sure finances are in as much order as I can do, making or eating elaborate brunches and dinners for/with people, messing around on IG, and being involved in organizing work.

So much advice and all of it repeated. These bits were all given to me: it’s important to acknowledge that there’s a serious lack of authentic representation of who we are in literature, and so it is doubly important to be courageous and unconventional in your seeing and naming, which will produce distinct and completely new work. And as antidote to the difficulty of self-interrogative work, to be flexible, patient, loving, forgiving of yourself, your longings, your incomplete pieces–forgiveness and gentleness all the time, even more than you think you deserve or have any right to be. Allow yourself to be loved on by people who see you and do right by those people. That you live in a body, not a mind alone, and so it’s good to care for and protect that body to the best of our ability–keeping it healthy with food and movement, allowing it safety and comfort. What we make in our solitude is necessary no matter what the world messages you, and even when you feel alone you aren’t: you are inextricable from your artistic lineage, and ancestors are always peeking over our shoulders.

The heart of this excerpt of “DSM” is in extricate the root and burn it. The language of ally is maybe good to burn. This answer deals specifically with racism in a northamerican (norteamericano) context. My skin color is a very light brown. I am often white-passing, which right here I am defining this way: not always, but often enough, people look at me and decide I am white. I see light brown people sometimes get upset when people of color who are identifiably of color do not instantly recognize us as home or test us to see if we are safe. I encourage us to focus our energies instead on disrupting what is trying to kill us.

When people decide I am white, which is not always but sometimes, they interact with me as if I am a white person. I am aware that I am not being followed around in the store or that the first cab I lift my hand to call has stopped for me. I could also, perhaps–and this the price assimilation extracts, no?–choose to be oblivious. I could choose to extrapolate from a curated set of experiences and decide to believe the ease which is available to me in certain moments and interactions is available to everybody. But performance of whiteness and white entitlement, which always comes at a cost to a human being who seems to not be you, is a choice. It is a pathology, and it is murderous. People who consider themselves white can and often do choose to be white every moment the choice is presented, which is thousands of times a day.

The language of “ally” is flawed because every person, light brown people like myself included, who benefit all or some of the time, are the machination of white supremacy. Ally implies neutrality. It implies that the you you believe yourself to be and the me you believe me to be are distinct and fully independent of one another. But there is no gulf between us. This me is a raced me because this you is a raced you. One makes the other. Racism exists only as long as the structural processes which birth and rebirth the signifier of “ally” exist. The benefit of racism comes directly and without interruption at the expense of people of color. The word “ally” lives in the pretending–necessary for the continued existence of racism–that our circumstances are unrelated and therefore an ally’s neutral intervention is not only possible–it isn’t–but is simply a question of one’s individual ethics and morality, and not a corrective measure towards one’s own learned and enacted oppressive behavior. This pretense of distance between “ally” and “other”–encoded in these very words–feels to me to near the root of this country’s delusional thinking about itself and identity.

My advice is to divest from whiteness while understanding that in your lifetime, you will likely never stop being white. But do the work. Do it almost obsessively: it is a haunting and a hurting thing that is designed for killing. See it. Inhabit it. Allow yourself to see the stream of benefits it provides you. Guilt, interrogated, might be both productive and useful: what is inside of it? What does guilt cover up? What’s your guilt composed of? Name it fully. This naming is very important because it will help others do their own extrication, their own burning, their own divestment. It is a soil and a sea and any naming you do will yield more naming. It’s much easier to see a thing when it has a name. Continue to name it as it unmasks itself. Be vulnerable and disciplined with yourself. Learn how to tolerate being wrong. And finally, don’t show off: be suspicious of each glittery impulse towards performativity of “getting it” for reward.

My advice is also to trace down the desire towards allyship to its root in one’s own fixedness in one’s whiteness–which again is necessary work for anybody who has ever benefited in the slightest from whiteness. Confronting that series of past failures can be done only by a self-love that is actually rigor.

I think that citing/presenting a real array of artists in one’s scholarly work and in one’s classroom teaching is key to keeping our poetry dialogue healthy and thriving. Higher ed is simply not possible for everyone who works as an artist, and credentialing can’t be corequisite for artists who are artists to be taken seriously in their artmaking. Deliberate citation and promotion at best can be a remedy for a kind of semiconscious institutional gatekeeping. And that’s on teachers (like me) and professors and students to find people they like to read–who may not be awarded and/or fancily credentialed–and read widely and think openly and playfully with their work. 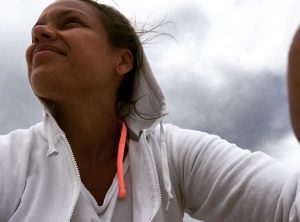 CHRISTINA OLIVARES is the author of No Map of the Earth Includes Stars (2015), winner of the 2014 Marsh Hawk Press Book Prize, and of the chaplet Interrupt (2015), published by Belladonna* Collaborative. Her chapbook DSM/Partial Manual, winner of the 2014 Vinyl 45s Chapbook Contest, is forthcoming. She is the recipient of two Jerome Foundation Travel and Study Grants (2014 and 2010), and she has participated in the CantoMundo (fellow), VONA, Frost Place (fellow), and Bread Loaf Writers Conferences. She is the recipient of a 2015-2016 Lower Manhattan Cultural Council Workspace Residency. She is a 2016, 2017, and 2018 AWP panelist. She was a visiting faculty member in the Rutgers-Newark poetry MFA program. Olivares is a queer Cubanx-American poet and educator from the Bronx in New York City. She earned an MFA from CUNY Brooklyn College in Poetry. She moves with Black Lives Matter and works towards poverty abolition.