You know, I am asked this question a lot and often I give an answer that turns out to be a lie. I say something like: I learned to speak with my own voice once I found the community of qtpoc writers I now call my friends and compatriots or I learned that my voice could carry in the context of poetry slams, which taught me both how to speak from my particular set of experiences and also how to link those up to some shared language or imaginary. There are certain ways in which this is true, but, honestly, I don’t think I would have become a writer at all if I hadn’t begun from the assumption that in writing I could be myself, write as myself, about things that mattered to me.

I think there’s a certain anxiety driving this question—an anxiety that is perhaps most pronounced in people, (especially socially/economically marginalized people) who have gone to school to be writers, in one way or another—and it’s one that I recognize, an anxiety that, for me, was installed sometime during the process of “learning to write” in school. That’s when and where I (and most of us) came to have ideas about what counted as writing, where I became anxious about whether who I was and what I cared about were legitimately the stuff of literature. But I was writing long before I officially “learned to write” and I had a writing community online—readers and editors and all that—before I understood what those things were. I didn’t really grow up online like a lot of people my age, but I did hang out on writing message boards and posted poems and stories that were, like so much of the stuff there, barely concealed versions of my conscious inner life, my fantasy life, whatever. So. Long story short, I started writing because writing was one of the places I felt I could be myself and all of the anxiety about what I was allowed to write, in whose voice I was allowed to speak, came later.

How do you feel about recent conversations about “literary success,” prize culture, personal brands, and the idea of “poetry business?” What are the best ways to support poets and poetry? What would you like to see change in the literary world, or how would you “Better” American poetry? Can American poetry be “bettered?”

I’m going to lump these questions together because they feel related to me. Also, I’m not sure that I’m caught up on “recent conversations,” but I suspect they have to do with whether or not prize culture, personal brands, and the general trend toward an increasingly (?) monetized literary field (success = making money from writing) is a good thing? Whether, for example, it allows for more diversity, by, in the case of personal brands, detaching literary success from the usual institutions or quashes that diversity, in the case of prize culture, since what is ‘good’ (and therefore what is profitable) tends to be determined by existing (racist, sexist, etc.) norms?

If so, how I feel about this conversation is more or less *shrug emoji.* Not that I don’t think that it is a conversation worth having, and worth having over and over again, but as long as we live in a country that is ambivalent about whether or not the arts are important and that seems hostile to the idea of cultural work as work—that is, to the idea that artists should be supported to make art, that teachers ought to be supported to teach art, and so on—it seems inevitable that people are going to make themselves into brands, will lust after prizes, will do what they need to do in order to both make art and make a living. Do I think this is good? Certainly not. But I also think it’s a shame when we shame each other for going after/getting what, in this particular world, makes our lives and art possible.

Anyway. I think this situation would be made better if the US weren’t so averse to spending public funds on art/culture. Failing this pipedream, it seems to me that we ought to all work to be more intentional about how we use and distribute what resources there are. We keep in mind that there is actually a huge “service to the profession” component that goes into being an artist (reading for prizes comes immediately to mind!) that is often unpaid and unacknowledged, and we try to make that work “count,” make it into something other than unseen reproductive labor. We try to be kind to each other, we strive to see each other always and primarily as other human beings with lives and loves and hurts and deadlines rather than as gatekeepers and/or sources of funding/cultural capital. But, also, we recognize when we are or become those things (gatekeepers, sources of capital) and we use that even tenuous kind of power to let others inside.

Well, of course. To all of the above. For example: last fall the Oakland Museum curated an exhibit in honor of the 50th anniversary of the Black Panthers and, walking around in there, one of the things I was immediately struck by was how deeply important literature and other arts were to the life and afterlife of that particular movement – there were stacks and stacks of books. I actually think it’s quite weird to imagine that social change can happen without literature, since books of various kinds (and I’m counting oral traditions as “books” here) tend to be where ideas are stored and transmitted, where each generation learns all over again what the world is like, and has been like, and might be. How do you have collective action without collective imagination?

That said, I don’t think that writing is always, or even usually, the same thing as activism. Writing a poem is not the same thing as throwing a brick, marching, scattering ashes on the White House lawn, raising funds, allowing yourself/you story to become the basis of civil rights litigation, on and on. But, you know, a poem can provide the language of these actions. A novel can show us the world that makes such actions necessary. Etc. On the flipside, activism has made it possible for more and more kinds of people to be recognized as writers, more and more stories to circulate. So, the two things depend on one another.

No. I mean, I think “polemical” poetry/art—art that is plainly argumentative, that unmistakably states its case— exists as a subcategory of poetry/art. Also, of course, there is art that takes Politics as its subject matter. But, simply, all art has a worldview, so all art is political.

Has 2017 been different for you than other years?

I’ve written less and listened more intently. I traveled outside of the US for the first time and was not taken to be an American, a small reprieve. Just today I was pulled suddenly into a hug by a stranger, a drunk older black man at the bus stop, and something about this year, all the usual cruelty and indifference now brazenly on display, allowed me to, for the first time in my life, experience this as something like love. 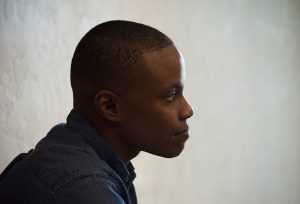 CAMERON AWKWARD-RICH is the author of Sympathetic Little Monster (Ricochet Editions, 2016) and the chapbook Transit (Button Poetry, 2015). A Cave Canem fellow and poetry editor for Muzzle Magazine, his poetry has appeared in Narrative, The Baffler, Indiana Review, and elsewhere. Cam received his PhD from the program in Modern Thought and Literature at Stanford University.