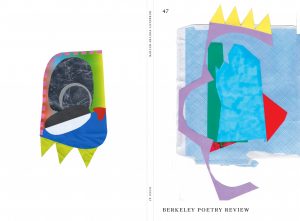 Recently I’ve been reading Jane Gregory’s new book, Yeah No, and John Yau’s Bijoux in the Dark—and in the past week, I’ve found myself mostly reading Namwali Serpell’s short stories, Deleuze and Guattari’s A Thousand Plateaus, Anne-Lise François’s Open Secrets, John Durham Peters’s The Marvelous Clouds, Anna Moschovakis’s They and We Will Get into Trouble for This, Eduardo Viveiros de Castro’s Cannibal Metaphysics (trans. Peter Skafish), and Queer Inhumanisms, an issue of GLQ edited by Dana Luciano and Mel Chen. And I’ve been watching a lot of spy movies.

I’ve also been spending a lot of time, lately, reading for Berkeley Poetry Review, as our 48th issue is set to publish in early May—and in preparation for an issue of translations and collaborations BPR is putting together with Ordkonst, a Swedish literary journal affiliated with Lund University (the issue release is set for May 2nd). It’s the first time we’re collaborating on an issue with another journal, and I’m really excited about it. In our call for submissions, we asked for experiments in process and collaboration across languages, as well as translations between Swedish and English, and the work we’ve received has felt exciting and vital. This issue is going to feature translations of passages of Amy Berkowitz’s Tender Points, Olga Ravn’s Jeg æder mig selv som lyng (I eat myself like heather), and recent works from Ida Borjel and Jenny Tunedal, among others—and I’m also really excited about collaborations we’ve received. There’s one between Johannes Göransson and Sara Tuss Efrik, in which Efrik translates Göransson’s A New Quarantine Will Take My Place from English to Swedish in a process she calls “automanias,” rewriting the book through other voices to talk about her own life; Göransson then translates her automanias back to English in a similar “unfaithful” mode. So the writing stages what Göransson described in an email as “a conversation or struggle”—and I’m really drawn to this work, and the ways in which it draws out its processes of transformation and revision, highlighting the common root (vertere, “to turn”) between “version” and “verse.” My co-editor, Erik Isberg, is my current collaborator—the process of working with him on this issue has felt transformative. I don’t find the work of curation or publishing very different from the work of writing poetry; a part of the magic of both, to me, comes from putting things into contact. I’m hoping that collaboration will make its way into my work in other registers as well (though it’s hard for me to say whether any activity isn’t collaborative in some way?).

I don’t know who I’d love to collaborate with, exactly—I think I’m leaving that to fate.

As for emerging writers I’m excited about—I’m excited about Jacq Greyja, a friend of mine whose work is also in the Bettering American anthology. They have a chapbook called Greater Grave forthcoming from The Operating System; I read it recently, and I can’t wait for it to be published. I’m also really excited about Eliot D’Silva —I went to a reading he gave at E.M. Wolfman in Oakland last fall, and it was really incredible. I’m excited, also, by Lo Ferris; Jessica Laser, whose first book is forthcoming from Letter Machine Editions; Sheri Hellberg, whose translations of Olga Ravn we’re publishing soon—and really, more people than I can say—I’m worried that I’m forgetting to mention someone who I’d hate to forget.

Can you share work from other media that either inspired or is in conversation with your piece in Bettering American?

The poem series that’s featured in this anthology cites lots of other works, and perhaps most prominently, Steve Reich’s “Piano Phase,” which runs through the series as a sort of organizing motif, and I think informed the way I thought about the work of form in this series.

In retrospect, it’s more clear to me now that at the time that I was writing “PH(R)ASE,” Emma Sulkowicz’s Mattress Performance (Carry That Weight) was often on my mind—at the time, I was 19 and a sophomore in college, and the sort of legal coda to Sulkowicz’s performance was taking place. Her assailant, Paul Nungesser, had attempted to sue Columbia University for allowing the performance to happen, claiming that it was a form of harassment and defamation, and in March that year his suit was dismissed. I was following the news of that case, and thinking about Sulkowicz’s performance, and the sprawl of it — thinking of the boundaries or continuities between event and environment. I was also just starting to spend a lot of time thinking about Ruth Asawa’s wire sculptures—thinking about the within and without of form.

“PH(R)ASE” has mostly literary influences. The simplest description I can give of it is that it’s a piece of writing about reading and listening. But when I was writing “PH(R)ASE,” I was going through a period of time where I would turn on random Korean TV shows and radio programs and play them in the background while I wrote, to keep myself suspended in a state of code-switching—this space of mostly sonic and emotional association that opens for me when I’m trying to think very rapidly between languages.

Writing is a lot of work, and I think that if the effort of writing doesn’t help me work through something that matters to me, then I tend not to do it—I’ve been lucky to have good teachers who’ve encouraged me in this, and who’ve helped me focus my thought, so I can be more “myself.” In the spring of 2016, I was in a workshop led by Anna Moschovakis, and for one meeting, she invited Jen Hofer for a classroom visit, to talk about tiny press practices, and her language justice project. Meeting her helped me develop some things that are still important to my poetic practice—for one, feeling unrestricted in writing in Korean as well as English in my poems. I tend to follow “false friends”—sonic channels provided by similarity of sound across differences in meaning between languages. For instance, 말: in Korean, it means both “horse” and “language”—it sounds like mal, “evil” in French, as well as the English “maul.” The lyric is where I think through these relationships and resonances.

That workshop also made me realize that certain formal restrictions that can come up when writing with the process of designing and hand-making a book are really generative in my process. And I can feel really lost without a sense of working with my body and material—I might not have known this without Anna and Jen.

When I was a freshman in college, also, I took a poetry workshop taught by Claire Marie Stancek, and in that class, one of the first critical texts we read was Lyn Hejinian’s “The Rejection of Closure.” I think this turned out to be a formative experience that allowed me to feel comfortable with thinking of my writing as a sort of aporetic activity. 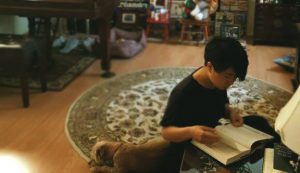 최 Lindsay is a diasporic Korean poet and a student at UC Berkeley, where they work as the editor-in-chief of Berkeley Poetry Review. They have poems published in HOLD: A Journal, The Felt, Omniverse, and Apogee, with a chapbook forthcoming from speCt! books.