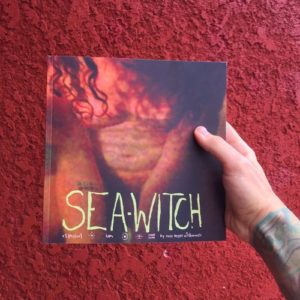 I want the world to read Jade Eklund, who only publishes her work (which defies genre and goes from diagrams to doodles to weird jokes to very serious ideas about magick and politics) via scanned notebooks which she puts into public facebook photo albums. I’m fairly certain she writes them entirely stream-of-consciousness with no editing. The things she comes up with are incredible. You can read some of them here: TIME STATION 81, SEE NO EVIL, FUCK WIZARDS.

Coming out as trans definitely was a big part of that for me. It changed my whole life and my perspective on everything. It radicalized me. More importantly than that I would say that living as an out trans woman changed me. It made me see the things going on around me with a new sense of urgency. My partner, the writer Irene Milsom, was responsible for my radical education as all of this stuff started crashing down on me and it changed me in a huge way. I began to give no fucks about a lot of establishment stuff, a lot of respectability politics. I found myself using the new sense of urgency to create things that spoke to my experience and what I saw around me. I think for a lot of people this accompanies a focus on the concrete in their writing, but for me the realest parts of my experience are constantly influenced by my mental illness and my spiritual experience of the world, so my writing simultaneously got weirder than ever as it grew more political. 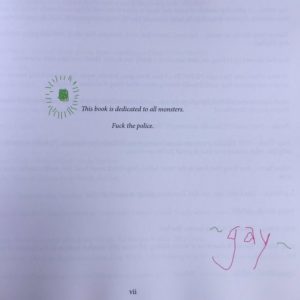 For me writing is self-care. The pieces I have done that are the most harrowing for me to revisit are all pieces I wrote when my emotions and my brain had taken me to very dark places and I was trying to write my way out of them.

What poets do you identify with, or feel you are grouped with by editors, readers, conference organizers, or educators? What misconceptions do you see about these groupings of poets? Do you feel these groupings can be useful, can be potentially marginalizing or disenfranchising, or can be both?

I don’t think anyone groups me these days. Or at least I’m not aware of it. Most often I get grouped with other trans writers, which I get, but I often find myself wishing there were more trans writers who were working outside of genre, who were working in the realm of the magickal and strange. There are only a handful of other trans writers I feel like are really doing the same kind of thing I am, and I rarely see our names mentioned together, unfortunately. I think overall a lot of identity-based groupings of writers aren’t inherently useful. I’m interested in marginalized creators in general, and in all creators who are using their full weird selves toward radical justice.

Do you feel that your writing is necessarily assumed to be autobiographical? How do you feel about this assumption?

I mean my most recent book is about living inside of a witch god. It’s a clearly fantastical realm so probably anything autobiographical you get from that it’s probably accurate to assume is actually autobiographical. If anything I find myself wishing people would take the weirdest bits of what I’m doing as more autobiographical, because I think a lot of times when I’m writing directly about an experience that seems fairly warped or strange it’s easy to assume I’m being creative with it, but those are often the most direct representations of actual strange experiences I have had.

I have found that, for me, a lot of writing/art that comes from a seemingly “apolitical” space can be very aesthetically/technically inspiring to me, but ultimately feels useless as art. It feels like ideas for art. Where are the stakes??

Betray your privilege. You are an undercover agent in the world of privilege. Conspire against those around you for the uplifting of the marginalized. Your goal must be complete sabotage.

What question do you wish we had asked?

I’m not sure what question this should fall under, but I think my most common frustration with the writing world is the way that marginalized people are given the liberal assignment to write about our identity and oppression in a way that explains it to the privileged in a very literal way. To write the narratives of our identity in the way they’ve always been written. I think instead we should be robbing the aesthetic and technical ideas of empty privileged, “apolitical” art and using them to our own ends. By which I mean justice. By which I mean uncovering and de-masking structural forces that keep us marginalized, writing love letters to others who are fighting and suffering, and writing to keep ourselves alive in any way we can make that happen.

MOSS ANGEL WITCHMONSTR is a transgender artist, writer, musician, and spellcaster living in Oregon. She is the author of four books, most recently Sea-Witch v.1 (2fast2house, 2017). Follow/support her as she writes Sea-Witch at http://patreon.com/monstr