Because of my lack of instant access, I haven’t had the ability to purchase books online for a long time, so when I finally had the chance, I got C. D. Wright’s The Poet, the Lion, Talking Pictures, El Farolito, a Wedding in St. Roch, the Big Box Store, the Warp in the Mirror, Spring, Midnights, Fire & All and have been reading it over and over on my ferry rides. Other than that, Ocean Vuong’s Night Sky with Exit Wounds has me transfixed & its edges are so worn out & thumb-stained from reading it so much, Murakami’s many books because, well, they’re at every book store in Japan, and I’ve been returning to this book in Japanese: けろけろけろっぴの徒然草, or Kerokerokeroppi Frog’s Essays in Idleness of the Hello Kitty series—some really cute lessons on stillness.

Music’s like water. It’s also great company when you live in such simplicity and silence out on a distant island. And I like to practice my Japanese by sharing music with a music teacher and some friends on the island. Recent things that’ve stuck with me: Hitorie, Yole Yole, Schubert’s “Ave Maria,” Arvo Pärt, Perfume Genius, Ben Howard’s I Forget Where We Were, Sam Beam and Jesca Hoop’s Love Letter for the Fire, and Saosin just released a record called Along the Shadow with their original singer (of Circa Survive)—Anthony Green—who fronted the band back in the 2003 days, and Schuman’s String Quartet Op. 41 No. 1—thanks to my favorite music source, the lovely Ishidou-sensei.

New/emerging poet: Monica Sok. I first read her at New Republic last November, and her poem “Cambodia” just opened something in me. There’s an unbridled energy, a sort of no-apologies-about-it urgency that’s so clear both in the telling and the stark language: “We sleep / in bed at night / but do not dream” had me thinking of the privilege to even dream a dream through the night when sometimes there are fields, wherever—far away, back at home, or here in my village—where “nothing grows. Nothing.” That emptiness. Memories of stillness, of gathering, and of violence. Incredible. Oh, and her essay “On Fear, Fearlessness, and Intergenerational Trauma” is so powerful and necessary. Read her, please. She’s at Narrative, Triquarterly, Omniverse, and her chapbook Year Zero is out with PSA.

What’s the earliest experience, or stand-out experience, you can remember that made you realize that you can be yourself, write as yourself, and write about issues that matter to you? Has this been difficult for you?

This is such a wonderful question. Because I’m usually so timid and shy, I’m easily frightened. Writing, at first, was a way into the world through language. Lots of curiosity and playing around. But the first time I truly felt I could write into a space that both frightened me but lead me to a moment of discovery was when I was maybe 21. It was a moment where I almost felt like I wasn’t writing but I was being written—& not gently, but being pulled under into a place where I didn’t know if I could learn to breathe again.

It was this poem one night while I was in undergrad—I titled it “Godless Coyote in Love.” It carved out an entrance into a world where all my animal-people feel guilt & shame, are given space to be disappointed in humans, & offered a chance to re-examine their grief. That was the opening for me to start searching the page for my ghosts & dead who never stop telling me—touch us and let us remember the flesh of being alive again. After workshop, my professor asked me, “Did something happen?” So I told him about it.

I listen to a lot of music that stretches the emotions. I go for walks on the island. I drink tea & sit with silence. I run a lot. I watch the ocean move in and out. I speak strands of my ancestral language to myself—as if it saves me. I remember my late grandmother’s words: “Put your hand on your tim’íne. Feel that? That means you’re alive. Remember that.” And my other grandma who told me before I left the States: “Wash the cry from your hair.” I like to replay that moment in my head to remind myself of how I can stay gentle while inside the most frightened versions of myself.

For myself, as an indigenous person, I don’t. I find that language shaped in the mouth of an indigenous person is a unique form of political resistance—no matter the context. There’s a weight of living that I know—a sort of space divided between the living and the dead. I say ’ipsúuski and it means creating or working something with my hands—which is to say I am practicing being worthy of my watchful ghosts. Or I say hands, and the English of it might mean violence or a sensual touch to stay alive. I say animal or myth, and I hear my tribal language—all the sáw sáw and quqú quqú—being translated into this tongue. When I hear body in so many contexts, they each mean something different in the writing of so many people. Our bones we carry are carved out of histories. It’s as deep as DNA. We surrender our current selves to those old ones who gave us this life-hollowed space to stay alive. We say I—and mine means ghost or implies indigenous existence = oxymoron. I don’t know—I’ve never intended to write anything political—but of course, my being in this skin is a political hostility. I never asked for this, but it has become part of every pattern I scribble into the page. Like a language you only began to speak by simply living.

What question do you wish we had asked?

How are you is a beautiful place to start. In any language. 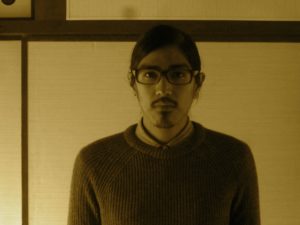 MICHAEL WASSON is the author of This American Ghost (YesYes Books, 2017), winner of the Vinyl 45 Chapbook Prize. His poems appear in American Poets, Drunken Boat, Narrative, Denver Quarterly, Passages North, and Mud City Journal. He is nimíipuu from the Nez Perce Reservation and lives abroad.