Do you feel that your writing is necessarily assumed to be autobiographical? How do you feel about this assumption?

I do feel that my writing is assumed to be not only autobiographical, but inherently political due to my situated embodiment as a racialized trans person of color. I am often asked things like: “How does your work with found text relate to your race and gender status?” as though there needs to be a connection. Whether or not there is—and the answer to this changes for me depending on context, intent, and feeling—the presumption itself reveals a set of attitudes about bodies like mine. When someone treats marginalized people as inherently politicized, they are effectively saying “it is your job to do political work, not mine—my body is politically neutral, free.” And when someone does this to art by marginalized people, they are effectively saying “the only value your work has, is its perceived radicalism.” Just because someone is in the crosshairs of systemic oppression does not make them an activist. Yes, for those bodies to survive is inherently radical, but expecting these bodies to do the imaginative, emotional, and physical labor of dismantling these oppressive systems is a form of victim-blaming.

To other young Black writers: write however, whenever, and whyever you want. We already have to work twice as hard to be seen as half as good, so why even bother with institutional, subcultural, and interpersonal criteria for inclusion and respect? I used to waste a lot of time trying to get people to treat me as human, both within and outside creative circles. Eventually I just realized it would never amount to anything, given the terms of exclusion that humanism underlies.

To other light skinned Black people: we owe our darker family. Do the work. Share resources with them, because they come easier to us. Showcase their work whenever you can. Chances are, whatever you are doing, a dark skinned Black person has said it better before you. Find that out. Establish your archive. Attack the colorism in your local contexts. Don’t let yourself be sucked into an isolating token situation where you’re the only Black person in the room, and you’re expected to feel honored to have “a place at the table.” Flip that fucking table. Spill the wine. Kill the imaginary toad. Burn down the real garden.

The best advice I ever received was from my 9th grade English teacher, Ms. Hong. She was really the reason I developed a passion for writing—though I may just have wanted to impress her because I had a crush on her. Anyway, her advice was twofold: first, honesty is inherently manipulative, so when writing it’s best to instead use a kind of exacting attitude toward yourself and your experiences without expecting any precision; and second, speed metal sucks. It’s all about black metal.

We’re currently living in a police/surveillance state. How has this affected your approach toward poetry, art, persona, and personal presence?

Who is “we”? Black people have been living under violent surveillance since the beginning of the American project, and the police emerged from the slave patrols. This isn’t a new thing, and I don’t think the recent generalization of quantified surveillance from Black Americans to a larger swath of Americans has substantially altered my poetics (not only due to the history of America, but because a surveilled, corporatized digital landscape is really the only one I’ve known; the hacker ethos and the badly-coded badlands of pre-social media internet are largely before my time).

I can’t help but feel a sense of schadenfreude toward those dealing with recent developments in American surveillance practices. I try to imagine what it feels like to be entitled to a sense of privacy. If the typical white American really had a problem with the dehumanizing nature of the digital corporate landscape, would they be willing to trade away the convenience that comes with it? Probably not, since this would entail accepting that life in the West is subsidized by Black and brown suffering both here and abroad. I don’t think this is something people really want to think about.

School needs to be free. The state needs to fund art. Punitive schooling and the school-to-prison pipeline needs to end. The huge diversity of poetic output must be acknowledged (for example, due to racism and classism, slam poetry, which has a much broader reach than academic poetry, is often derided as vernacular doggerel). Poetry institutions need to actually accept that the future (and present, really) of poetry is digital, and the movers and shakers of the digital are by and large Black and brown, and by and large women and nonbinaries. The fact that someone like Kenneth Goldsmith has any academic position at all, and the fact that he somehow “represents” the digital zeitgeist, is an absolute sham—his work has nothing to do with anything relevant to poetry in 2016.

Students already know what they can do: avoid debt by not going to school, bum around the country like Steve Roggenbuck, connect with random people on Facebook in the hopes that one of every five becomes a fan of your work with minimum expectation that you become a fan of theirs (this is a tough one!). None of this will necessarily lead to a useful poetic career, and is at best a kind of neo-romanticist response to an economy shifting from industrial to informatic emphasis, but my point is that students know better than anyone else how limited their options have become as education marketized since the 70s. It reveals a lack of hope in poetry’s potential to foment latent discontent, which is a travesty since without his hope, there is no real reason to sustain a poetic practice (in my opinion). 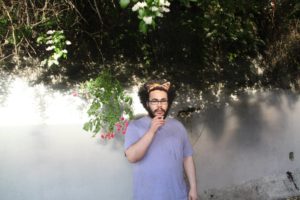 MANUEL ARTURO ABREU (b. 1991, Santo Domingo) is a poet and artist from the Bronx. They work with text, ephemeral sculpture, and photography. Their work has appeared at Rhizome, the New Inquiry, HOUSE Gallery, MCA Sydney, Poor Claudia, Apogee Journal, and elsewhere. Forthcoming Seattle exhibitions at the Institute for New Connotative Action and Veronica projectspace. manuel is the author of List of Consonants (Bottlecap Press, 2015) and transtrender (forthcoming 2016, Quimerica Books). Currently based in Portland, manuel co-facilitates home school, a free pop-up art school.