I think the best advice I’ve ever gotten was “write your experience before someone who doesn’t look like you writes your experience.” And that has really sunk in for me, in a way that I wasn’t expecting. There is no shame in writing identity, or place, or a history that you claim and have the right to excavate. I was, at one point, so uncomfortable with the idea of this, and so I would say “well, let me write this poem in a way that will go down easy for people.” I didn’t want to have the idea of violence or anger associated with my work. I still don’t want only those things associated with my work, but I am of the mind that there is a tone that young writers must set about how they want themselves and their work to live in the world. And that tone has to be unflinching, and unafraid to push up against what the expectations of the work might be. I didn’t listen to that early enough, and I’m glad I’ve started to listen to it now.

Aziza Barnes asks in their poem, “How come black folks can’t just write about flowers?” Does this resonate with you? How would you answer that question?

That is among my favorite poem of theirs, though it is hard to select, isn’t it? I think about it in the context of my own life, how little I saw of actual flowers growing up and how much I saw of actual dirt, actual concrete. These things shape us and, by extension, what comes out of us. I’m learning to write about flowers, I think. I’m walking into gardens now and touching what grows there. I feel this urgency to write a world that is briefly better than the one we’re living. And that requires a relationship to consistent and small beauty.

What do you think is the most significant impact social media has had on the poetry world recently?

I sometimes feel weird about twitter, because I feel like there are a good portion of my twitter followers who don’t read poems at all. I’m sure an even smaller portion maybe didn’t arrive to my twitter due to my poems. Still, I think it’s incredible that I have this platform where I can share work that means something to me, work beyond my own. I think that’s significant. I also think that there are drawbacks. Like all scenes/communities/whatever, I think the idea of competition is made more present and jarring due to social media. This idea that there can only be a handful of us doing great things. I really believe that there’s enough out here for all of us, and I get worried about what comes of our personalities in these social media spaces when we convince ourselves otherwise. But a lot of times, I just like tweeting about pop music and things my dog is doing.

What do you have to say to those who would suggest your writing is too intense or upsetting?

The most prominent answer, the one that I think first comes to the mind of many of my peers, would be along the lines of: “it reflects my life.” And, sure, yes. That too. But also I tend to want to unpack what about it is upsetting the person in question. I am, now more than ever, interested in writing of the whole and complete black life as I have known it. What upsets me inside of this mission isn’t the poem about someone dying, but the poem about all that person has to live for, with the understanding that they could soon be gone. That is where I come down on intensity. What registers as intense and upsetting to me is that people I love, despite the world at its worst, still find pockets of joy, only to have them be brief and easily taken. I want to write work that stretches that joy out and reflects on it, but still give an understanding that it exists in spite of that which is working against it. I find few things more intense and upsetting than that. But if someone comes to a poem of mine and says “oh, there’s a person who dies in that poem, I just can’t deal.” I say “yes. But that person also lived in this poem. That person also lived a whole life beyond this poem, and was loved by many people.”

I lean on the blues and I lean on gospel. I need to exit the poem and fall into a good spiritual, the kind that shakes away everything that the poem left on your skin. I’m not a person of any strong faith, but I like a song about a higher power sung by someone who truly believes that a higher power exists. It makes my re-entry into the world seem larger, more possible. 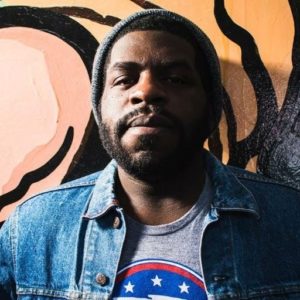 HANIF WILLIS-ABDURRAQUIB is a poet and essayist from Columbus, Ohio. His first full-length collection of poems, The Crown Ain’t Worth Much, was recently released by Button Poetry.