For me there were several moments throughout my educational development that led to these experiences, but definitely moving from a border city to New York City for graduate school was a stand-out experience; it highlighted the way others perceive me and changed how I saw myself and how I viewed my writing. Initially I was reluctant to write “closer to the bones.” Yes, I wrote from a first person point of view, but there was still a distance I kept between my poems and me. There were also feelings of displacement, of not necessarily belonging to the new landscape.  Nevertheless, the actual—physical—distance I felt after moving eventually augmented this need to write candidly, to preserve past experiences that were a large part of my identity.  That’s exactly what I did. I began to write more about my personal experiences and was inspired by writers like Benjamin Alire Saenz and C. Dale Young. Their courage led me to take more chances with my writing, ultimately changing the direction of my themes. This, of course, was easier said than done, and it is still something I’m working on, but I feel that identifying my misgivings was important for my writing to grow.

Be courageous. Understand the full picture and show genuine commitment. It is more than just standing up for a cause, or about reading/analyzing a text and relating to it, but rather it starts with looking inward, reflecting and acknowledging one’s privilege, and one’s experience with oppression, and then taking action. An individual must first recognize this before anything else. Have conviction; especially if/when conversations get “uncomfortable.” In order to be an ally you must get past discomfort.

Content and conversation need to change. It is important to create an environment in academia, where students’ viewpoints can be shared and are welcomed, where they can take risks in their writing. I’m reminded of what educator Peter H. Johnston stated, “if [students] don’t take risks, they are not putting themselves in learning situations.” I feel this applies to teachers as well.  As educators, it is equally vital to take risks, to create a responsive educational environment, allowing students to question and generate discourse that may be challenging but necessary. These risks could be changing the material from the expected or canonical texts. It can happen by introducing new voices into the literary dialogue as a way of broadening perspectives. When I taught undergrad, I included a variety of poets from different backgrounds which was something noted by my students, they were truly engaged. I feel that continuing to get educated, whether it is through book clubs, affinity groups, professional development are crucial to continue learning and thus initiate change. More importantly, an educator should always be willing to listen to their students, to their peers. The only way to truly affect change is by listening.

Aziza Barnes asks in their poem, “How come black folks can’t just write about flowers?” Does this resonate with you? How would you answer that question?

I believe the ironic title plays on the misconception that poetry has “flowery” diction, and should therefore be doggerel and produce a happy response from the reader.  It also  hints at this idea that nature should be the poet’s muse, which is not always the case, especially when met with what is currently happening around the nation. How can a community, which has been largely oppressed and continues to endure marginalization, be inspired by nature or want to write about these exhausted analogies when there are larger issues to confront? To write about flowers would be to ignore reality, to live in denial, to be complicit. Now is not the time to stop and smell the roses, but to face the truth. 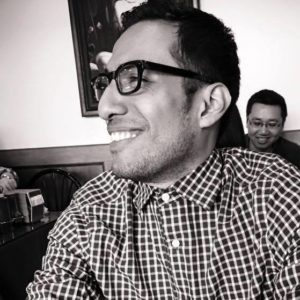 EDUARDO MARTINEZ-LEYVA‘s poems have appeared in Assaracus, The Journal, Nepantla: A Journal for Queer Poets of Color, Best New Poets 2015, and elsewhere. He received his MFA from Columbia University, where he was a teaching fellow. He grew up in El Paso, Texas, and currently lives in New York City. He is a CantoMundo Fellow.