“Why is the largest audio forum on the internet called Gear Slutz? Why is this guitar pedal called Screaming Whore? Why have no women been featured in the last several issues of Tape Op, Sound on Sound, Electronic Musician, Mix and EQ magazines?”

As a woman working in the audio world, Madeleine Campbell consistently encountered resistance when she asked questions like these. While still in school full-time, she took on full-time work in a professional recording studio. She soon came to understand unfortunate truths about this environment, which motivated her to examine it closely. “Audio,” she points out, “is a white male-dominated industry with a deeply ingrained culture of sexism.” A decidedly macho thread wove its way through Campbell’s interactions and experiences. It was this misogyny that inspired Women in Sound, a groundbreaking series of zines that are selling out before their release dates. 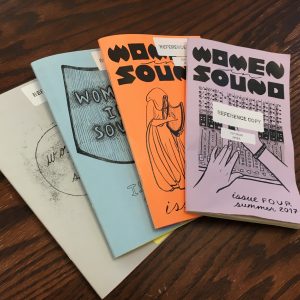 Women in Sound is a visual treat as much as it is a delight to read. Printed on neon paper and accompanied by Maggie Lynn Negrete’s striking and playful illustrations, each issue is immediately enticing. And it only gets more exciting from there. Inside, interviews and essays examine the practices of influential and innovative singers, rappers, engineers, managers, and others. Topics addressed run the gambit—from cataloging the specifics of running an artist-run sound center with S1 Synth Library co-founder Alissa Derubeis to prioritizing self-care while on tour with queer musician, engineer, and educator Jade Payne. Honest moments of recognition, like Sara Landeau’s recommendation about overworking oneself (“I don’t advise anyone to do as much as I take on, especially if you don’t have to.”), appear alongside practical advice for aspiring sound artists from Yaeji, a Brooklyn-based electronic music artist (“There are lots of free or inexpensive apps, too. Start with your phone! You don’t have to be a good singer.”).

Campbell’s interview style is steeped in both expertise and empathy, lending an air of comfort to each exchange. This is not to say, however, that hard, important conversations are not addressed. Susan Rogers, a prolific sound engineer and distinguished professor, closes her interview with the following advice for those who hope to follow in her footsteps: “Find for yourself a personal philosophy and some ready-made responses to difficult scenarios. You can get that from reading these kinds of interviews with the people who’ve come before you. Read how they solved certain problems. …That includes things that involve harassment and being singled out for your gender.” 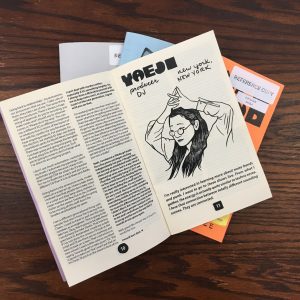 But the interviews and essays featured here do far, far more than shine a light on the specific brand of adversity faced by women and non-binary folks who call sound their medium. Readers encounter countless beginner’s tips alongside sprinklings of technical jargon that highlight the deep well of knowledge Campbell has tapped into. For those of us (me, for example) who can do little else but stare wide-eyed at equalizers, occasionally daring to poke them with a shaky finger, an immensely helpful glossary of terms is provided. In fact, this is one of the many reasons why Women in Sound has found its way into the Music Department of the Carnegie Library of Pittsburgh. Providing this invaluable resource to the public aligns perfectly with Campbell’s goals for the zine: “1. Showcase women and non-binary people working in this field. 2. Encourage dialogue that establishes an open platform to share experiences and celebrate achievements without sexualizing the tools that helped them along the way. 3. Increase and maintain conversation that is accessible to beginning audioworkers and anyone who is interested in learning more but doesn’t know where to start.” 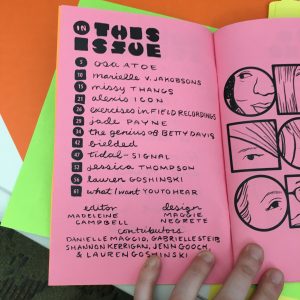 The true weight of Campbell’s mission can be experienced simply by reading the table of contents. To open a zine about audio and see exclusively female and non-binary folks featured is simultaneously soothing and invigorating. There is tremendously powerful hope within these pages, along with an eye towards a more inclusive community. Campbell puts it best in the Issue One Editor’s Note:

“Open your eyes. Pay more attention. Stop talking and listen. Every audioworker and artist is responsible for fostering a safer, more inclusive environment for women and non-binary people working in live and recorded sound.” 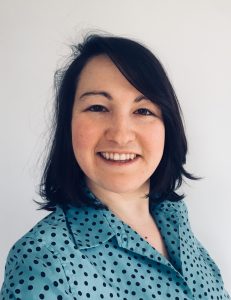 Tess Wilson is a librarian in Pittsburgh, where she connects patrons with tools for community conversation and civic change. Her library-related writing can be found on the OIF and YALSA blogs, and on the Carnegie Library of Pittsburgh’s Eleventh Stack blog. She earned her MFA in Creative Writing from Chatham University, where she served on the staff of The Fourth River. Most recently, she was Assistant Editor for Hyacinth Girl Press and an editor/carpenter for the Pittsburgh Poetry Houses project. Her poetry has appeared in NEAT Magazine, The Crawl Space Journal, IDK Magazine, New Poetry from the Midwest, the Manhattanville Review, and in the Squad of Sisters Zine. She is a collector of many things, from big dictionaries to small rocks.