For as long as there has been storytelling, there have been monsters. In Egypt it was Anubis and Bastet. In India Dawon, Pishacha, and Kaliya. Likewise, Scandinavian folklore teaches readers to fear the Mare and Nökken, and in China the Mogwai, the creature after which the original 1984 film Gremlins was conceived. The list goes on: the Congolese have the Kongamato, the Zulu have the Tikoloshe, South Africans have the Grootslang, and the Greeks have Hydra, Scylla, Medusa. To be honest, I’ve always had empathy (and now nostalgia) for Harry from Harry and the Hendersons. Monsters are nothing new. But what is it that makes us so fascinated with these creatures?

There are many explanations. The idea of “otherness” gained a foothold with Hegel’s phenomenology, specifically Phenomenology of Spirit, which claimed that self-consciousness makes itself known through identification and relation to another. More than 100 years later, Simone de Beauvoir’s The Second Sex engendered otherness by positing that women were just an “Other” in relation to men, nothing more than subordinates and reproductive slaves.

Psychology has many explanations for why people are fascinated with monstrous creatures: “cultural constructions of the terrible that define what it is we subconsciously fear and what it is we’re told to hate or love;” to avoid confronting our own mortality and, most notably, the fear of our own repressed self, which coincides with Freudian theory.

Not surprisingly, de Beauvoir rejected Freud’s theories, though other modern psychologists continue to use them to explain the role that monsters have on the psyche: to satisfy the Thanatos (destructive) impetus. But I think monsters are more than a Hegelian phenomenon, and more than a feminist explication for “otherness.” So, too, the monster phenomenon seems to be much more than a metaphor for otherness or xenophobia.

In a panel at the 2018 AWP Conference, Sofia Samatar appeared with Kelly Link and others, who discussed monsters and their importance to the literary canon. The discussion shed much light on the topic and discussed ways in which readers can better understand the importance of monsters as living, breathing characters. Monsters are complex creatures—as complex as individual readers. They blend fear and desire and “work on the space where opposites meet.” Monsters can represent “something you’re terrified of in yourself and you use the metaphor to describe this.” Somehow, the panel concluded, monsters make the unfathomable fathomable. They “allow the unspeakable to be spoken” (AWP, 2018).

Del and Sofia Samatar’s Monster Portraits is a work that provides an up-close look at the complexity of monsters by providing a compendium of monster biographies, narratives that move beyond horror and disgust—and beyond psychological and political theories.

What is important about this work is its form. This sister-and-brother team have created a work that turns the idea of “other” on its head and makes otherness and the process of “othering” obsolete. These are portraits of characters and the stories that accompany these characters. It was a careful and creative choice to craft this work in this way, and by choosing to make the form a series of portraits, the distance between “person” and “monster” grows smaller.

These Monster Portraits are portraits just like those that appear on the walls of the White House, the Modern Museum of Art, the Louvre, or the temple of Thebes, or the home of a family whose lineage has been documented for decades and decades prior.

These are not portraits merely of monsters, these are portraits of people, regardless of whether they are fictional or real. That is, if we think of other as “other” instead of another equal, the result can be, especially out of fear, “monster.”

But when these monsters are humanized, then what we have is just another person—not other, not fear, not different. And the narratives that accompany these portraits, while they may be evocative of myth or archetype, further support the normalization of the people portrayed within this work’s pages.

Take for example The Green Lady who “emerged from the seat at Rostai, crowned with foam” (7). Like Botticelli’s “Birth of Venus,” she has emerged from the sea as a perfect form, not merely to be admired, but to provide humanity with the beginnings of a new narrative. Her presence provides an opportunity for renewal and change. That The Green Lady’s personal history includes a backstory about a sixteenth-century theologian who was convicted of heresy for worshiping her instead of the creator, spurns the metaphor for all narratives of modern affliction: addiction, depression, oppression, and isolation.

The Green Lady evokes the idea that we must extract what we don’t like, what doesn’t work well, or what feels uncomfortable in order to be whole or perfect. But true transformation requires first integration and then a rebirth of newness into the world. Throughout history we have seen otherness as the thing to be extracted; it’s the basis of many wars, but we have not yet transformed as a collective because we have not transformed as individuals. The Green Lady reminds us of this.

The Early Ones bring absurdity to the idea of “otherness.” “Like all monsters, we don’t belong,” their narrative begins, “but our problem is time and not space. We got here too early. We have always had this sense of wrongful, unseemly arrival” (24).  These creatures provoke the question: belong to what, exactly? Perhaps, otherness is not an explication for what is different, but rather the context in which we find everyone. And, if monsters are the creatures who don’t belong, then it is each of us who equally don’t belong, thereby subversively proving that everyone belongs.

“We are the hiss in the woodshed, the curious stench. To see us run on the great plain at dawn is to see the landscape returned to itself, beyond plastic and smog, returned to its archaic splendor, the panoply of acacia shadows, the thousand and one varieties of blue” (24). The Early Ones are a personification of nostalgia, and a reminder of a world history that was, at one time, less complex, more whole, and unabashedly more humanistic. Not just that, The Early Ones provide a reminder of a place within ourselves, a place where we are all connected, to which we all can return—if we choose.

The Sexy Zebra digs more deeply into the stereotypical depiction of women, particularly in comic books. Classically, we see Catwoman, Batgirl, Black Widow, and Wonder Woman all the same in their respective franchises. That is, their body types and shapes are identical, as are their characters and they way they continue to portray the female archetype: capable of anything when their sexuality is wielded the correct way. What changes among them are their outer clothing, facial features, and, perhaps, the geography and context of their narratives.

While one of the authors, Sofia Samatar, openly states her own internal conflict about including this character exactly because of the reductivist way women are typically portrayed, The Sexy Zebra and her inclusion in Monster Portraits actually makes a bold, subversive statement. “Certain points about monsters will be made,” the narrator says of the work. “It will be clear that monsters have been rejected but really they are our friends. All the monsters will be brought home” (37).

The Sexy Zebra echoes what we have already learned from The Green Lady and The Early Ones—that acceptance and integration are both key to inclusion and humanization of “monsters.” That is, we cannot change stereotypical portrayals of women by rejecting them, we must instead accept the narrative of existing stereotypes in order to write a new narrative for the future.

Further, the passage titled Beauty, supports this. Uniqueness to each monster is as unique as each human—wavy hair, freckles, creamy skin: horns, wings, a spiked exoskeleton. And, what is largely missing in this work is a detailed, concrete setting in the way setting is traditionally depicted in novels and short stories. Instead there is a compendium of different people loosely tethered to a mythical place. To where are these people anchored? In what historical context are their stories continuing?

Beauty illustrates the absence of setting, which provides a metaphor that there can be no belonging because there is no place. If there is no place, then there is nothing to fit into; none are excluded and gender, sexuality, race, stereotype are all obsolete.

Instead, “All monsters…express relationships: not the ones we dream of, the ones we have” (34). Beauty is a relative thing, context equally relative, and individuality as varied as can be imagined.

That’s not to say that men are excluded from this work, after all, the writer and illustrator are a brother and sister team. Monsters of Compassion presents a vignette of an ailing narrator who has a cough and seeks the help—and pity—of a male doctor to cure this affliction. While waiting for the cure, the narrator recalls the “We Are the World” campaign of the 1980s creating a fluidity between the world within the pages of the book and the world outside the pages of the book. Just as these monsters are portraits of people, their world is the world in which we, the readers, also live.

The doctor then provides a concoction for the narrator to drink in order to cure the cough, and simultaneously he has provided a cure for dualistic thinking, a revelation: “The monster evokes, in equal measure, compassion and its opposite” (48).

So while it’s easy to say that monsters are just another “other,” that self-consciousness does make itself known through relation to another, or that women are just “other” in relation to men, or that every single one of us—including you there, reading this passage—is fascinated by the urge to satisfy some destructive impetus inherent in the psyche, or, better yet, biologically programmed to survive as long as possible, none of this is complete. Monsters, in fact, are wholly none of these things. They are not simply Dawon, Nökken, or Mogwai, not Grootslang or Medusa. They are many on an infinite spectrum of beings, a variety, a mish-mash, gendered or genderless, tall or short, horned or spiked, hairy or bald, fat or skinny, polka-dotted or scaled, with or without tails, and capable of a myriad of languages and “cultures” imaginable. 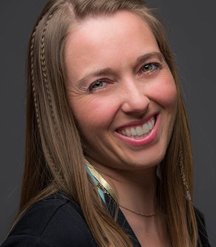 KELLY LYDICK received her B.A. in Writing and Literature from Burlington College, and her M.A. in Writing and Consciousness from the New College of California, San Francisco (now at CIIS).  Her writing has appeared in Guernica, The Rumpus, Drunken Boat, Switched-on Gutenberg, Mission at Tenth, Thema, Tarpaulin Sky, Natural Awakenings, Santa Fean, True Blue Spirit magazine, and many, many others.

Her work has also been featured on NPR’s The Writers’ Block. She is the author of the experimental, Mastering the Dream, and is a contributing author to the anthology Dreams That Change Our Lives. She is a member of the co-founding editorial board and Associate Editor of Immanence Journal.

Kelly holds certifications as a Meditation Facilitator, Reiki Master, and Gateway Dreaming™ Coach. She teaches writing and personal growth workshops, and offers private consultations through her company Waking the Dream.

In 2016, Kelly was honored by the internationally-renowned Omega Institute of Rhinebeck, New York with a Juno Award for excellence in women’s leadership for her service-based business. You can learn more about her work at kellylydick.com.