You are here: Home / VIDA Review / Issue 3 / A Review of This is One Way to Dance by Sejal Shah 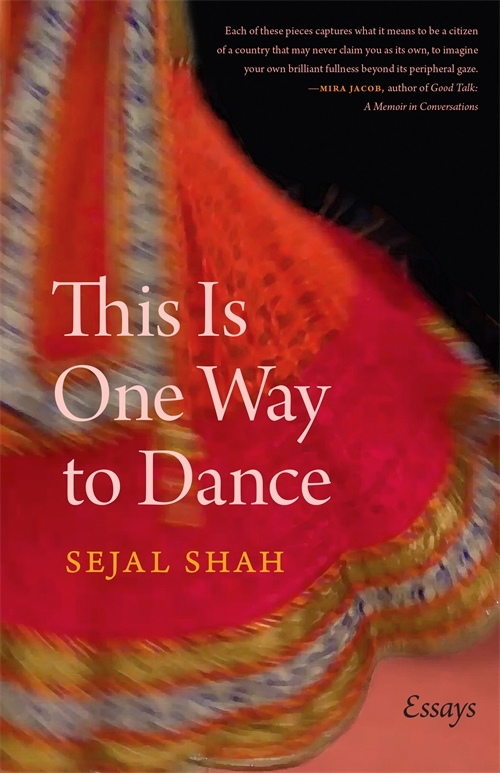 When I first heard of Sejal Shah’s debut essay collection This is One Way to Dance, I was excited at the prospect of seeing how a fellow Gujarati American writer articulated the experiences I knew well from my own life: the foods, the family parties, the weddings. Above all, the experience we had in common was the act of carving out a writing life as a person of color in the diaspora. What we witness in these pages is Shah making a place for herself in the world, for the life she lives and the creative fulfillment she pursues.

It’s fitting, then, that while Sejal has published extensively across genres, she makes her own space through the essay form. The essay is a jostling, a weeding, a clearing of space. The essay also becomes a place for the writer to dig down into a sense of self, to whittle through layers of identity.

As a sort-of creative travelogue, the book’s form constantly reminds you of itself, of the journeys that the author took to produce it. Each piece ends with a date, informing us of the long expanses of time between each composition, which Shah clearly undertakes with great care. The prose is tight and succinct, but unhurried; each sentence and paragraph patiently closes the gaps between those expanses, adding another detail, idea, or layer on the story she tells. For example, in “Who’s Indian?”:

I think many of us travel for the same reason—to feel the edges of ourselves simultaneously sharpened and blurred. We are sharpened by the contrast of another language, a new place and culture, and softened by a willingness to see and be open to the possibilities of different selves while on vacation, in a time bounded by parentheses—by our inevitable return to the familiar.

My trip to Sicily was the travel component of a photo-journalism course I took at the University of Massachusetts, Amherst, in the spring of 2000. I had twice traveled to mainland Italy, and I loved how I felt there—how Italian sounded in my ears, how the Italians I met saw me as an American, how I didn’t have to explain where I was from. At twenty-seven, explanations tired me.

As a result, we’re relaxed, welcomed, to ease our breath between each stop in Shah’s journey. Turns of life take her from upstate New York to New York City to Italy, and then to Iowa and the West. We find her in homes and airports, in parks and grand vistas. As we travel with her across the pages, themes coalesce, each engaging with the dynamics of being a South Asian woman writer. Shah weaves a tapestry of objects (films, books, notes, postcards, and other ephemera) against the canvas of an open America and the world.

In a poem that serves as prelude, she notes: “Stories are an argument between some words.” Between the words of This is One Way to Dance, we find arguments about what it means to be a multi-hyphenate, a definition that changes with space and time. One word, paragraph, essay to another, Shah illustrates a life in constant push and pull between competing identities as writer, teacher, traveler, lover, South Asian, American, and woman.

The first two pieces demonstrate this pendulum motion beautifully. “Skin” locates Shah in the eyes of others: how do the white boys, black boys, and brown boys see her differently? Where is one to find a partner while cutting through the deluge of racial viewpoints? We’re then taken to “Matrimonials: A Triptych,” where, by describing her brother’s marriage in the early 90s, Shah sets up the trajectory of seeking her own partners, across relationships both lasting and fleeting, hoping to have a wedding of her own. (Personally, I felt glee at mentions of Monsoon Wedding or New York area Desi DJ legend Magic Mike.)

The effort of many contemporary essayists is to make the lived experience tangible, knowable, without relying on straightforward prose. Shah engages with this effort in inventive pieces like “Curriculum,” framing formative experiences as college coursework, or “Things People Said: An Essay in Seven Steps,” wherein she recounts her marital experiences in a septet of family reactions to wedding planning. The essay’s structure mirrors the seven pheras, or circles, a couple takes around the ceremonial pyre.

Other highlights include “Your Wilderness Is Not Permanent,” on Burning Man’s barter economy, where, again, objects—caramels, a water bottle, a t-shirt from the Millay Colony for writers—each with their own history and significance, or not, appear and transform in a new and unknown space. Or in “Betsy, Tacy, Sejal, Tib” in which she describes writing her own book series about an intrepid gang of Gujarati girls, making space for her culture alongside Nancy Drew and Anne of Green Gables.

Across the collection, Shah always returns to one primary place: home. Food is home, making a comfortable place at the table, and so, a constant theme in the essays is food. Food becomes a way for Shah to triangulate place, whether restaurants in Queens, dinner at the poet Agha Shahid Ali’s home in Amherst, or the Rochester house she grew up in: “The house was one of many talismans for me, landmarks in the two or three miles of this city I still recognize as mine.”

In each other’s kitchens, they ate Hot Mix (Rice Krispies, potato sticks, peanuts, lemon juice, and murchu); practiced moonwalking; kept secret track of who got her period first, watched their mothers making chaa and finding the crushed red pepper to sprinkle on pizza, and their fathers debating something or playing carom.

These moments burrowed into my Gujarati American heart and memory. In this way, This is One Way To Dance becomes its own act of place-making for the reader, carefully and meticulously building a home for us and inviting us to a seat at the table. A place of comfort in the midst of this widely traveled yet deeply interior endeavor we call a writing life.

Aditya Desai is a writer, teacher, and activist in Baltimore. His stories and essays have appeared in Tropics of Meta, B O D Y, Barrelhouse Magazine, The Rumpus, The Millions, The Margins, District Lit, The Kartika Review, The Aerogram, and others.