Evolution in the Underworld

Vocabulary lessons in the afterlife become affairs of high ritual. To hold a wood pencil in the hand again is a great pleasure. A hexagon to keep it from rolling away, to provide rest and silence, readiness. The dark sheen of the graphite letters appearing on the white paper. We make a kind of drunkenness of it. A line was never so handsome.

Touching the paper as if it might be skin. With more I could draw and fill in a shadow for each of us. To make our own marks again when we did up above. I have nearly forgotten how bright it could be. As if the sun cut itself open like a lemon.

Time fluttered away like old paper. Burials of things were a form of magic. To cast a spell, to find the right person among all the persons of the underworld. To wait for the right person to arrive below, as if lowered on a thread. To practice patience like a spider in the dark. To be held by an invisible web, to feel gravity gently pull on your limbs like a lover.

To sit like a monk, with bombs raining all above—this is the one roof that will hold against. Why must the living assault us with their language? Crematorium, mausoleum, interment, as if Latin were still alive on paper to make containers for the dead. We have our own coliseum. We have a circus. We remember bread and distractions.

Each week we sit down to our lessons like cats waiting for a mouse parade. Hungry for words, for soft strings of them. As if we brought an army of silk worms with us, to serve us. We recall our first word: panoply. a complete or impressive collection of things. a splendid display. a complete set of arms or suit of armor. The death of completion. A kind of printmaking. Engraving. An impression, some kind of print on something yielding.

Desire moves through glass to the objects on the other side. This perpetual motion is a liquid like gold. Try to remember the difference between solid and vapor. What is heat. The excitement of molecules and rearrangement of the spirit. Electricity follows me, still, a personal weather. My school mimics the cosmos.

Our school welcomes the dead with a mantle of petals. We have a panoply of orchards. We have everything of everything. Everything you lost is here. You are what others have lost. You are here. Finally, there is enough. The others, the others who lost you. They will find you here, in the school, in the school of infinity.

“What the White Whale was to Ahab, has been hinted; what, at times, he was to me, as yet remains unsaid.”
– Chapter XLII, The Whiteness of the Whale, Moby-Dick

Though in many natural objects, whiteness refiningly enhances beauty, as if imparting some special virtue of its own, as in marbles, japonicas, and pearls; and though various nations have in some way recognised a certain royal pre-eminence in this hue; even the barbaric, grand old kings of Pegu placing the title “Lord of the White Elephants” above all their other magniloquent ascriptions of dominion; and the modern kings of Siam unfurling the same snow-white quadruped in the royal standard; and the Hanoverian flag bearing the one figure of a snow-white charger; and the great Austrian Empire, Caesarian, heir to overlording Rome, having for the imperial color the same imperial hue; and though this pre-eminence in it applies to the human race itself, giving the white man ideal mastership over every dusky tribe; and though, besides all this, whiteness has been even made significant of gladness, for among the Romans a white stone marked a joyful day; and though in other mortal sympathies and symbolizings, this same hue is made the emblem of many touching, noble things—the innocence of brides, the benignity of age; though among the Red Men of America the giving of the white belt of wampum was the deepest pledge of honor; though in many climes, whiteness typifies the majesty of Justice in the ermine of the Judge, and contributes to the daily state of kings and queens drawn by milk-white steeds; though even in the higher mysteries of the most august religions it has been made the symbol of the divine spotlessness and power; by the Persian fire worshippers, the white forked flame being held the holiest on the altar; and in the Greek mythologies, Great Jove himself made incarnate in a snow-white bull; and though to the noble Iroquois, the midwinter sacrifice of the sacred White Dog was by far the holiest festival of their theology, that spotless, faithful creature being held the purest envoy they could send to the Great Spirit with the annual tidings of their own fidelity; and though directly from the Latin word for white, all Christian priests derive the name of one part of their sacred vesture, the alb or tunic, worn beneath the cassock; and though among the holy pomps of the Romish faith, white is specially employed in the celebration of the Passion of our Lord; though in the Vision of St. John, white robes are given to the redeemed, and the four- and-twenty elders stand clothed in white before the great white throne, and the Holy One that sitteth there white like wool; yet for all these accumulated associations, with whatever is sweet, and honorable, and sublime, there yet lurks an elusive something in the innermost idea of this hue, which strikes more of panic to the soul than that redness which affrights in blood.
This elusive quality it is, which causes the thought of whiteness, when divorced from more kindly associations, and coupled with any object terrible in itself, to heighten that terror to the furthest bounds. Witness the white bear of the poles, and the white shark of the tropics; what but their smooth, flaky whiteness makes them the transcendent horrors they are? That ghastly whiteness it is which imparts such an abhorrent mildness, even more loathsome than terrific, to the dumb gloating of their aspect. So that not the fierce-fanged tiger in his heraldic coat can so stagger courage as the white-shrouded bear or shark.
Bethink thee of the albatross, whence come those clouds of spiritual wonderment and pale dread, in which that white phantom sails in all imaginations? Not Coleridge first threw that spell; but God’s

In the House of Moths

Everything was white. My footprints—wet, then white. My shadow—west, then white. The dark concentric circles of my eyes—painted want, then white. A house made of moths is light, weighing almost nothing, the walls a thousand-thousand eyes, white on white. Glimmer. The murmur of wander. There was a grain to the air, a direction like fur, like sand. Sinkholes appeared in all dimensions. The floor was alive. I may have been dying. My desire for everything rose and fell and flowered over and over. My heart, a fathom of black seeds, rich with dark oil. Sound a fountain recycling time arcing over the house of moths. The electro-magnetic field of mirrors made of honey-glass. An ear to the floor and I was taken by the bees, their wings dipped in silver. We walked, we walked through room after room as the house followed me with its wings. What a handsome contagion. Then, a clock face was a white door we could never enter. I fashioned new organs out of clouds as my body disassembled into water. Dirt and grit and dust shook free from my open cloud-mouth. Many white tools in my apron, I bent down to perform the critical mechanics of Lepidoptera. We were jaws, we were many. 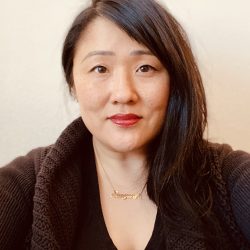