Rabrix was living in South Bend, Indiana. The most boring state in the United States. Its street moaned each second of its vacuous barrenness. Even the centipedes moved slower than a broken ceiling fan not even connected to electricity. The least boring thing about it was that the train station, bus station, and airport were united and located in one place, so it made the train ride into Chicago fairly tolerable. In two weeks she would fly to New York and never return. Then she would empty her consciousness of this empty wasteland. Even if it did have one of the best college football teams in the country. She wanted very much to un-Notre Dame the Notre Dame. Two more weeks, she told herself. Just two more weeks.

Not a smoker, she stood on the front porch of her temporary residence, which was between an Airbnb and an apartment, and watched the leaves whistle in the Midwest breeze and studied her neighbor’s nicotine-stained fingers pluck a cigarette in and out of her mouth. When she finished, she dropped its butt on the deck floor and ground it with the heel of her boot so hard as if she were smothering a myriapod until its pulverize-able, brittle internal organs were eviscerated and exposed. Then she slammed the screen door and climbed inside. Rabrix was always so surprised that a woman of her petite form and demeanor could provoke so much hostility in a place that had so much open field. Rabrix had never stayed at a residence for more than two weeks at a time. So she could not gauge what was normal human behavior for any tenant. She was certain, though, that her neighbor’s aggression was out of the norm. Leaning herself against the front porch’s pillar-like position, Rabrix thought that she loved her father very much. For naming her after the Rubik’s Cube. It seemed prophetic. She was a structural problem that could easily be solved with the right permutation and interlocking strategies. Although her mind was easy to scramble, she could become a pattern, by speedcubing herself, in a blink of an eye. At her periphery she noticed a police officer walking toward her. She acknowledged him with a half-wave, moving her fingers as if she was typing a manuscript in the air. He climbed her steps and introduced himself as Brink. Officer Brink. He was six foot six. The biggest man she had ever laid eyes on. She was five-one.

“Has anyone been bothering you?”

“No, absolutely not. Just patrolling.”

“What have you seen?”

Leaving the officer outside, she walked inside and waved him off. A few days later, she heard a knock or two at her door. Pulling herself out of the La-Z-Boy, she opened it. It was Officer Brink in his full police uniform, with belt, gun, and notepad.

“Officer Brink. Have I broken the law?”

“No. I was wondering if I could have your number. I would like to take you to dinner.”

Trying various computations in her Rubik’s mind, Rabrix could not come up with a combination that would allow her to deny his request without emasculating his authority. She gave him her number and shut her screen door. He could have arrested her without a cause. She wasn’t willing to risk it. In two weeks, she would be out of there.

He arrived to collect her for the date in a 3.0-meter long futuristic carbon fiber custom-built motorbike, a demigod version of a Nehmesis. Its wheels were as big as a La-Z-Boy. On a police officer’s salary, she thought, how could he afford such a decadent beast? The whole thing looked like it was worth half a mil. He drove her around St. Mary’s Lake. And then, when the mosquitos came out, he told her that he would take her to any restaurant she wanted. She pointed to some random diner. Order anything you like, he said. And, would you like a drink? The officer kept nudging her to order and order.

She didn’t have the heart to tell him that she was lactose and gluten intolerant and that she wasn’t into men. She couldn’t order anything on the menu except french fries. He ordered a full meal with many burgers and even a blueberry smoothie. After all, he was a big man.

“You are a very cheap date,” he announced after the waiter walked away with their leftovers.

Several dates later, two days before her flight to the East Coast, in his luxurious chopper, he took her to his home where he proudly showed her his gun vault. He had at least forty guns in there. Despite possessing such a futuristic superbike, his home was actually shabby and lame, quite the opposite of his outward appearance of wealth. His bed and sheets had coffee stains on them. His large, elongated sofa looked like it had been pulled out of a grave. Rabrix reasoned that if a person lopsidedly devoted so many resources to one thing, the other was bound to be impoverished. The vault was so big. If he was a serial killer and had stashed her in there, no one would know. While he locked the vault, he informed her that he had medically snipped it. She got the impression that he was trying to tell her that they could have sex freely without her worrying about being with child. She wondered if he had some disease because he wasn’t using any protections.

He drove her to Lake Monroe. She could smell the strong, dank, fresh, and distinct waft of the fertilizer and the lake’s musky atmosphere. He was a cautious driver and, sitting behind him, she felt safe and infused with a longing for home. She had traveled so much in the last four years. So much that she was at a point in her life where she was ready to die. She wished he had been reckless, had at least driven like a madman, willing to escort her straight to her death. But Officer Brink wasn’t any of such imprudent things. He took all safety precautions when driving her. As they got off the superbike and removed their helmets to walk around the lake, Rabrix noticed that their sun visors were sprayed with all kinds of bugs: mosquitos, gnats, water striders, and mayflies. They reminded her of sperm. How all women must feel like they were sun visors during sex. How she would like to clean those visors with Windex.

He walked her to her porch and asked for a kiss. With her hands pressed against his broad stomach—if he was shorter and she taller, then perhaps against his broad chest instead—they leaned in and kissed. It was a small kiss and he complained. He objected, You can do better than that. But she couldn’t go far. His aftershave. His post-barbered chin and cheek were too sandy and masculine for her and he tasted like nothing. Maybe it was like kissing a cabinet above the kitchen sink. And so she closed the screen behind him and waved goodbye.

Months later, while on the Amtrak train heading from Boston to New York, she received a Facebook message from him asking her to do a favor. He had just created an OkCupid profile and wanted her expertise on his profile wording. She closed his page immediately after she saw that he wrote “I am an honest man . . .” Needless to say, that was all she needed to know. She was certain that anyone who said they were honest on paper was the least trustworthy. 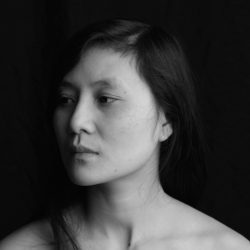