Defend the Body/Abandon the Body

I don’t remember what was in the bags. Probably clothes. They rustled against each other. As I walked to my car, I watched the train float by above me. I could feel two people walking behind me for a while.

They tell you not to open the trunk if you think you’re in danger. When I got to my car, I stopped. I unlocked the trunk and turned my body around to face the men who had followed me. I looked into their faces. They glanced away and walked past me fast. Nearly sprinting.

How you respond to a perceived threat is not always a choice.

Weather people spotted a tornado near my apartment.

I told him that I had to go as I swung open my apartment door. I walked out onto the breezeway, three stories above the abandoned tennis courts. I wanted to see it. I knew what to listen for. I wanted to walk out into it. It was reckless and it was automatic. The tornado never came.

I was told three years ago that I have PTSD. I let the therapist tell me like I hadn’t heard this before. I learned that when I zone out and can’t remember, say, a drive from one place to the next, it’s dissociation—that when something bumps up against my trauma, I leave my body.

Use your five senses. Put ice cubes in your hands. Smell a perfume you keep in a small pocket in your bag. Drink something warm, oatstraw tea. Name five things you see in this room. Say what you hear when I push play.

I don’t consciously choose to leave my body. I’ve tried using my senses and Fire of Breath and body scans and weighted blankets. And mr. Gnome’s “Melted Rainbow.”

At first the song sounds like someone turning on a roller coaster. I unbraid it—the drop in the bass, the distortion on the guitars, the ticking of the closed hi-hats. It works best if I can listen to it through earbuds. Because I can’t explain just where we are right now. Nicole Barille’s ethereal vocals double over themselves. Tripping, her voice grows thicker. It’s an invocation. It’s how I come back.

I begin doing Eye Movement Desensitization and Reprocessing (EMDR) with a therapist who specializes in PTSD. One day when I’m in her office and we’re talking about how I either “fight” or dissociate, she looks at me and says, “Defend the body. Abandon the body.”

We take on smaller traumas so that we can eventually work on the largest one. During one session I work on body image issues—wanting to be so small and thin. I imagine becoming superhero Ms. Marvel/Kamala Khan. I shapeshift. My arms grow and lengthen. They shoot up like someone’s putting a shirt on me. I take up space.

I have a Ms. Marvel figurine. She came with interchangeable forearms and hands. Her superhuman arms are put away in my desk drawer like fancy gloves. On sunny days, the shadow of her fists pools on my desk.

Summers are the hardest. It’s the season when the largest trauma happened. Even the color that the rooms take on is hard, a color like pollen that tries to spread itself across the house. There’s nothing I can do to stop it.

I saw a ribbon of blood smeared across the floor last summer. Without realizing it, without feeling it, I had cut my foot on a jagged hardwood plank. This is mild dissociation.

I go to the grocery store often. I don’t like buying large quantities of food, a ghost from my eating disorders. Even though I go grocery shopping a lot, I feel embarrassed every time. No matter what’s in my cart, I’m ashamed.

It was January and the day after Iran’s missile-strike on an Iraqi air base. My body went to the grocery store instead of watching the news. At the register, a man gave the cashier scanning my oranges a balled up piece of paper to throw in the trash. He was so casual with her that I thought she must know him. Frustrated, she told him that she didn’t have a trash can. He said, “Don’t fucking lie. I see your trash can. Just throw it in the fucking trash.” I positioned my body in between the two of them even though they weren’t that close to each other. “Where are you from? India? Iraq?” he asked her. I told him, “You don’t ask people that.” It was hard to stand. My legs shook and my hands moved into bunches by my side. I heard every person who has ever asked me, “But what are you?” Every time I was followed in stores because they thought I was stealing and how when I asked to see the manager, I pointed to the secret shopper and said “Why are they following me?” Every time I’ve been pulled out of the airport security line and asked to put my hands out in front of me to be swabbed.

“What are you doing to me?”

I don’t remember what happened next. I know that I pushed my groceries to the car, looking out for him. I must have come back into my body as I went into the store again. The cashier pointed me to a door with the sign AUTHORIZED PERSONNEL ONLY in gold. I stood in the doorway and saw the managers looking at monitors filled with people choosing meats and cereals.
I wanted to document what happened before I forgot. I told them what I could remember. I wanted to absorb all of what he tried to put on the cashier, who had laughed and rolled her eyes at him.

They said that they had him on video and they would watch out for him. What would I look like on that tape? What did I do? Where did I go?

I went to my first slumber party when I was ten. My mom had taken me to the store earlier that week to pick out a sleeping bag. I chose a teal one—slippery and cool on the outside and flannel on the inside. I was proud of it. I loved the way it felt carrying it in front of my body as I walked into my friend’s house. There were four or five other girls. The house smelled like bacon or firewood—not like my home. I laughed with them and we drank fruit-flavored soda straight out of the two-liter plastic bottle. We ate delivery pizza standing up around the kitchen island.

I fell asleep first. I woke up to laughter flickering in my friend’s bedroom. Blinking my eyes open, I looked down at my legs and saw a bright red blooming on my thighs and sleeping bag. The girls had taken food coloring and put it on my underwear to make me think I had gotten my period.

I was talking to my mom recently about that slumber party and fight-or-flight. I told her, “We’re just alike. Our instinct is fight. I remember calling you. You told them off when you picked me up that night.” She plainly remembered, “You didn’t call me. I picked you up the next morning and you told me you had a good time. I did laundry later that weekend and asked what happened to your sleeping bag. I was upset that it was already stained. You told me, ‘The girls pulled a prank on me. It’s not a big deal, Mom. That’s just what happens at sleepovers.’”

I practiced Kundalini yoga for a while. I never had my back to the door of the studio. I knew where every exit was. Always ready for danger. During a session, my teacher said, Keep up. Despite how gently she said it, the first time I heard this, I thought it was a challenge.

I sat inside a shell-shaped restaurant overlooking the ocean. I watched all the people on the beach, mostly adults. A couple had gone out too close to the rocks despite the posted signs telling us all not to. Everyone stopped walking or playing in the water and looked at them. The lifeguards pulled them back into shore, lost fish. The couple went back to their towels, bright flags on top of the sand, and talked like nothing had happened. I left the table, going into the center of the conch and then around its corners, the reflection of the ridges created a mouth laughing. I walked into the ocean for the first time in thirty years. I told my body to keep up. I closed my eyes. Saltwater seeped into my mouth and my body rose when a wave rolled by and I felt it. 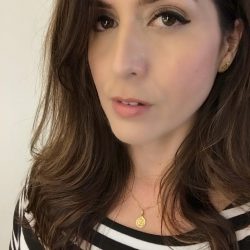 Jenny Sadre-Orafai is an Iranian-Mexican-American poet and writer. She is the co-author of Book of Levitations and the author of Malak and Paper Cotton Leather. Her prose has appeared in The Rumpus, Los Angeles Review, Fourteen Hills, and other journals. She is a co-founding editor of Josephine Quarterly and a Professor of English at Kennesaw State University.