I am currently reading Whiskey & Ribbons by Lessa Cross-Smith. A friend told me about the book and I’d seen reviews in various publications like Oprah’s magazine. This was a beautifully written novel.

My favorite genre is crime/suspense. I got it from my mother, who always enjoyed a great crime story. In 2017, The Book of Harlan by Bernice McFadden popped for me. Earlier this year: If Only for One Night by Victoria Christopher Murray and ReShonda Tate Billingsley. I really enjoy suspense with a twist. One novel that comes to mind is Gone Girl. The end of part one surprised me, and I ended up enjoying the remainder of the story. I also read a lot of nonfiction, especially if written by journalists or are about journalists, like, Eye on the Struggle: Ethel Payne, the First Lady of the Black Press by James McGrath Morris. I am also a fan of Octavia E. Butler’s works and reconnected with Black romance novels over the years.

Eric Jerome Dickey. His early work was about urban romance, but I truly became a fan of his work when Thieve’s Paradise was released. His flow with storytelling just stays with me. It’s gritty, sexy noir without overdoing it. And I love his hitman character, Gideon (Sleeping with Strangers, Waking with Enemies, Dying for Revenge, Resurrecting Midnight, Finding Gideon). Gideon’s story has sex, violence, anger and a deadly need to find the truth. Plus, Eric travels internationally and he puts his travels in the stories as Gideon. I feel like I am following this character!

Is there an author whose work you can’t wait to read next?

I have so many, I can’t pick just one. Zadie Smith, Terri McMillan, and Victoria Christopher Murray. The latter is because of her Seven Deadly Sins series. Envy is the latest one out.

I am working on the second book in my A Front Page Romance series. Photogenic Passion follows three sisters, who are triplets, involved in the media. Their romances put them in the spotlight. The first book, Extra! Extra! Love! came out in January 2018. 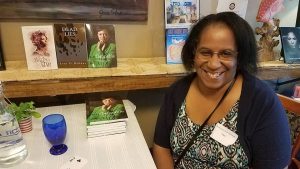 LISA D. DENEAL of Gary, Indiana, is a freelance writer with more than 20 years of experience in newspaper and magazine reporting. Her debut romance novel, Extra! Extra! Love! is out. She co-authored the memoir, Unflappable, and the novel, The Panthers Club. She self-published a crime drama, Dead Lies, in 2014.