I’m currently reading Jessmyn Ward’s novel Sing, Unburied, Sing. Within the first five pages I knew it was the truth and I had to share it with my students this fall. I am also re-reading Harryette Mullen’s Muse & Drudge. Her work is a series of poetic feats so I return to them again and again.

I’d have to say Cannibal by Safiya Sinclair. It offered such a fresh voice and the work was brave, lush and well-structured. But can I also say Magic City Gospel by Ashley Jones? Jones is the queen of form, particularly the sestina and villanelle. She’s a genius on the page. Lastly, I’d say The Underground Railroad, a novel by Colson Whitehead.

Is there an author whose work you can’t wait to read next?

Yes, Arundhati Roy has a new novel I really want. She wrote the novel The God of Small Things twenty or so years ago and finally just wrote her second novel. I love the romanticism of that. Her work, though, is how I like it—dense, gorgeous and heart-breaking. The God of Small Things has to be one of my favorite novels. I read a good amount of fiction because I teach it every year and it informs my work just as much as poetry.

I’m currently working on my second full collection of poetry. I have most of it written, I think, but I’m a slow editor. I am proud of myself, however, for writing a second book while my first was in the publishing process. It was tough, but I wanted to write it before I could talk myself out of it. I went backwards, I think. This second book is autobiographical and draws heavily from my childhood in particular. I grew up in Charleston, SC, the oldest daughter of five.  I’m fascinated by oceanography so I read some books on it last summer and it showed up in the work. It’s so different from Mend, which is almost entirely written in persona and only has a sliver of personal poems. Mend tells the story of the birth of gynecology and the role black enslaved women played in that process. It’s a collection of historical persona poetry. I’m really excited to share that Mend will be released this October. Mend is available for pre-order on Amazon and also here. 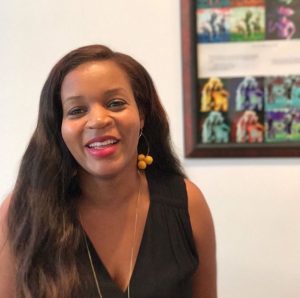 KWOYA FAGIN MAPLES is a writer from Charleston, S.C. She holds an MFA in Creative Writing from the University of Alabama and is a graduate Cave Canem Fellow. In addition to a chapbook publication by Finishing Line Press entitled Something of Yours (2010) her work is published in several journals and anthologies including Blackbird Literary Journal, Obsidian, Berkeley Poetry Review, The African-American Review, Pluck!, Cave Canem Anthology XIII, The Southern Women’s Review, and Sow’s Ear Poetry Review. Her most recent poetry collection, Mend, was finalist for the AWP Prize and is forthcoming from University Press of Kentucky. Edited by Lisa Williams, Mend tells the story of the birth of gynecology and the role black enslaved women played in that process. This work received a grant from the Rockefeller Brothers Foundation.