I’m currently reading Phillip B. Williams‘ fanged book of poems Thief in The Interior. He went with me to the gynecologist last week.

Definitely Bright Dead Things by fellow chingona Ada Limón. I love reading the work of Latinx writers who grew up in Cali. We’re a very special breed, and receive the world around us in similar ways. I was also knocked on my ass by Mahogany L. Browne‘s poems in Smudge. There is so much immediacy of language, such brutal introspection and unapologetic joy. When you consider the climate surrounding Black women in the United States, Browne’s words are like an anchor, holding her sisters to this planet, despite everything trying to push them off.

Jan Beatty‘s Red Sugar, for all that wildfire. That book is a national holiday and should be celebrated accordingly. My copy of Lucille Clifton‘s Good Woman is so tattered from all the dog-earing it’s received in the last decade. It’s my heart’s bible. I became a mother at seventeen, and her language-ing of things as both mother and woman shook me out of myself and demanded I pay better attention to the work I was putting in. She taught me I was something more than a torn-down woman.

Ugh, there are so many. Cynthia Cruz, Hieu Minh Nguyen, Airea D. Matthews, Meghan Privitello & Dominique Christina are SMASHING poetics in gutsy, brilliant ways. There are so many more I could list, but this is the crew I’d camp outside overnight to get a front row seat to hear.

I’m currently battling a monstrous manuscript. My third full-length book of poems will be about my ghost mother, mental illness and the gender dysphoria I experienced during childhood. I keep taking on new projects to avoid the book, though I know everything I do is essentially a rung on its ladder. I’ll get there, eventually. This spring I am going on a cross-country journey that intends to provide fellow survivors of sexual assault a tangible process for grief and healing. It’s ambitious as hell, but I’ve never backed down from a wild idea. After that, the Pink Door Women’s Writing Retreat that my family and I host in upstate New York will be entering its fifth year this summer. I’m excited to spend time with a crew of fierce, feral writers. It’s my spiritual tune-up. 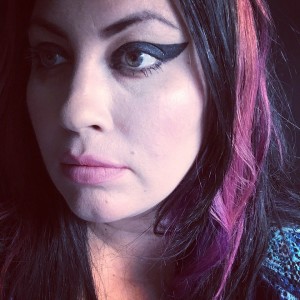 RACHEL McKIBBENS is a two-time New York Foundation for the Arts poetry fellow and author of two full-length books of poetry, Pink Elephant (Small Doggies Press) and Into the Dark & Emptying Field (Small Doggies Press), a finalist for the Paterson Poetry Prize, as well as the chapbook, Mammoth (Organic Weapon Arts.) McKibbens founded The Pink Door Women’s Writing Retreat, an annual writing retreat in the US open exclusively to women of color. McKibbens is a member of Latinas Unidas and co-curates the critically acclaimed reading series Poetry & Pie Night in upstate New York.