You are here: Home / Archives / Featured / VIDA: Fund the Count

VIDA was founded to cut through the bull. People had this intuitive sense that the literary culture was unbalanced, that women were being systematically excluded. But we needed to be sure. We needed to know, not guess.

That’s why the VIDA Count is so important. It gives us a concrete number. It makes things clear.

The disparity revealed in that first VIDA Count was actually worse than we guessed it would be. But since then, a number journals have improved, while others have pledged to do so.

Every year, the VIDA Count gets bigger. It takes thousands of hours for thirty counters to compile and double-check these numbers. It’s a huge job. Right now, all of that work is done by volunteers, which means some people aren’t able to participate. Plenty of smart, committed people who would like to volunteer just can’t afford to.

That’s not just VIDA’s loss. It is also VIDA’s problem to address. We believe that people should be paid for their work. And by paying the counters for their work, we hopes to make the VIDA community more inclusive.

That’s why we’re raising a fund to pay our counters: this is a job, and these people deserve to be paid.

So now we need your help. To keep growing, to keep having an impact, to include more journals and see the problem more clearly. VIDA counts, because you count. Help us continue this important work by making a donation today (click here & thank you!). 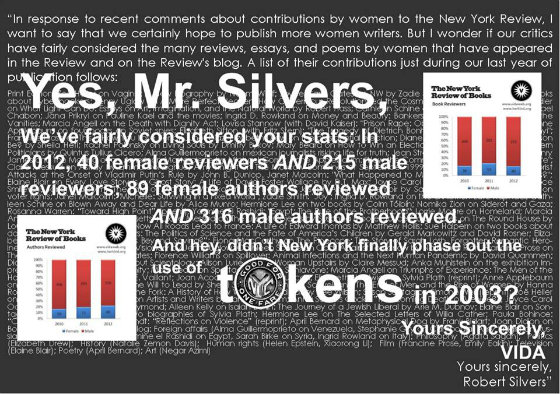