AWP and SXSW have come and gone (or maybe FXFU for the antiestablishment types). The expense reports have been turned in, the hangovers have passed but the headaches remain. I am speaking of course about the ongoing underrepresentation of women writers. I first covered the blog-war between Teddy Wayne and Jennifer Weiner on my own blog back in January. Since then Wayne seems to have backed down (presumably because the evidence is not on his side) but Weiner is keeping up the good fight with her most recent blog post wherein she gives a nod to 2011 count. At the onset of the discussion between her and Wayne the 2010 numbers were all we had to go by to point out the disparity between men and women writers. Unfortunately for us all, the 2011 numbers indicate basically no change. There is no need to continue to proselytize on the subject; I think it is fair to say that Wayne’s silence says a great deal. Let’s not see the following as another cudgel to the horse corpse but rather the purging of cobwebs from yet another dank corner of the room.

For those not familiar with the Wayne/Weiner story, a brief synopsis: Weiner pointed out that the New York Times doesn’t review very many women writers (a point which VIDA can reaffirm). Wayne says this is okay because women get better placement in non-print places such as book clubs and book store shelves. I laughed…and then cried a little and then proved Wayne wrong by going to the very chain store he called out and counted the most prominently placed books. Tada! Men win again.

Of course, there are always caveats. I counted the local B&N in Staten Island, a borough of NYC that is, well, not necessarily known as a particularly literary place.

So I went to the “real” New York for some hopefully better news. 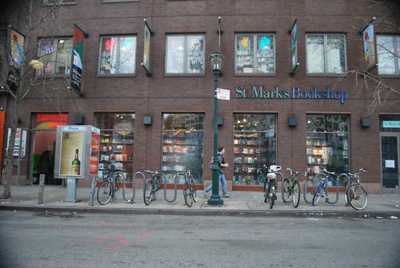 St. Mark’s Bookshop in the Cooper Square area of the Lower East Side was opened in 1977 and has played match maker to numerous writers’ friendships and collaborations from Susan Sontag and Annie Liebovitz to Allen Ginsburg and William Burroughs. Like so many other legends of the NYC’s literary era, St. Mark’s had fallen victim to the rising rents accompanying the gentrification of Manhattan’s Lower East Side. Petitions and fundraisers have since put St. Mark’s on more stable ground much to the neighborhood’s and the city’s benefit. 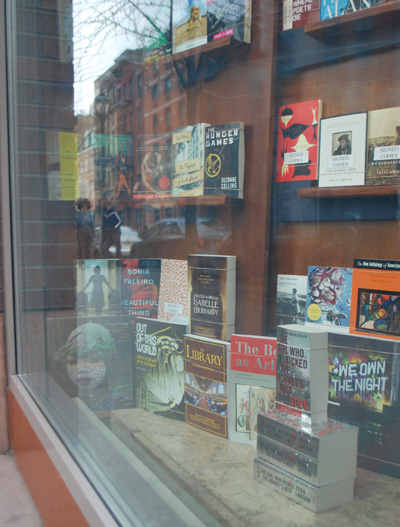 At the Staten Island Barnes and Noble I counted the shelves on the first floor which had the books shelved with all their covers facing the customers as opposed to the spines. The most comparable representation at the considerably smaller St. Marks’s was the windows. One would expect a place with such a storied background to and such a debt to so many members of the community to have a fairly forward thinking presentation of writers. I expected as much. Unfortunately, the numbers below indicate that is not the case. As with all things VIDA, this is not meant to be confrontational; merely it is a reminder of the work yet to be done and that even in our favorite places the gender representations are not equal. Despite being a VIDA insider, I have not been perfect in my own literary endeavors to provide equal representation which goes to show that almost everyone has room for improvement. Danielle Pafunda did an excellent job of dispelling the myth that submissions numbers have anything to do with the disparities in published work and that logic applies even more so here. Certainly there are enough books at St. Mark’s to have at least half the window space go to women. 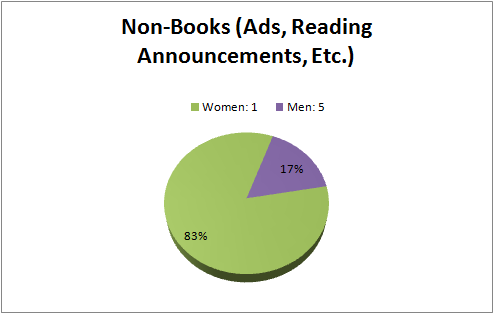