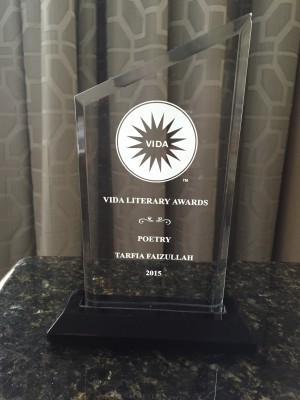 JOIN US FOR THE VIDA AWARDS 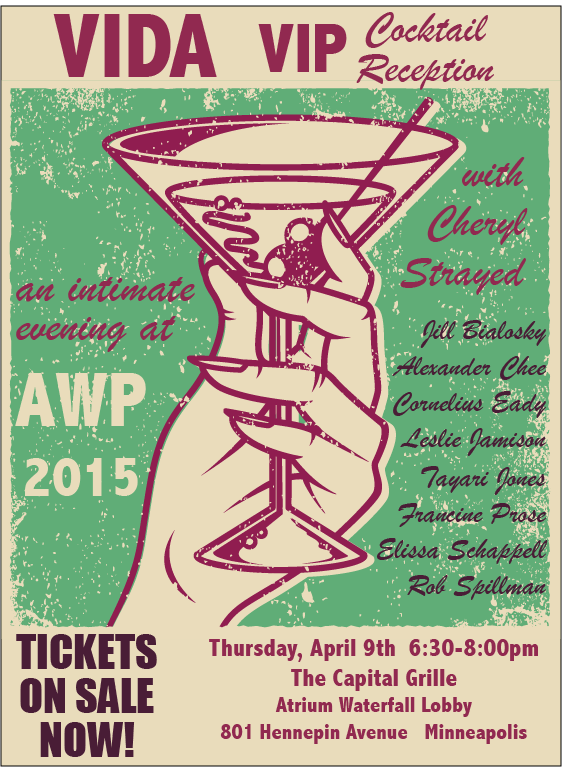 Join us for an intimate VIP cocktail reception at AWP 2015 in support of VIDA.
Honorees in attendance will include Cheryl Strayed and Jill Bialosky, Alexander Chee, Cornelius Eady, Leslie Jamison, Tayari Jones, Francine Prose, Elissa Schappell and Rob Spillman. The evening will include a champagne reception, premium open bar, passed gourmet hors d’oeuvres and an opportunity to spend time in a private setting with a few of the talented luminaries in our literary world.

VIDA: Women in Literary Arts works to raise awareness of gender disparity in the literary world today using their annual Count. Since its inception in 2009, The VIDA Count has made apparent the uneven playing field that exists in publishing and thus has helped to ignite important discourse and essential change in the literary community. Funds raised at this event, chaired by Anna March, will support the ongoing cost of The VIDA Count. VIP Event – SOLD OUT – Click here if you’d like to help fund the VIDA Count!

HEAT 2015: Hotter than Hell, A Benefit for VIDA

Join us for a day of literary talent, general amusement and downright bookishness during AWP 2015. It’s for a good cause — TO SUPPORT VIDA.

The Third Annual HEAT Reading, HEAT: Hotter Than Hell, will take place at the Minneapolis Convention Center in Room M101BC (Mezzanine Level). It is a fiery offsite event MC-ed by the fantabulous Antonia Crane. Indulge in our cash bar. Make your $5 contribution to VIDA. (FREE, but $5 suggested donation if you can swing it. Try to swing it, please. It costs a lot of chips to do that VIDA COUNT we all love so much and we’ve committed to bringing in $2,000 of those chips at this event). Win gift certificates to Powell’s you can use online. Support the fight for gender equality in our literary world.

Since 2009, VIDA: Women in Literary Arts has conducted The Count in an effort to raise awareness for gender disparity in the publishing world today. This effort has ignited important discourse and essential change in the literary community. The playing field is beginning to slowly level out, but there is still a long way to go. This year not only marks the sixth annual VIDA Count, but also the first annual Women of Color Count. VIDA is expanding their efforts to focus on intersectionality in publishing—that is, how women writers are further impeded by race and ethnicity.

HEAT was created by supportive literary citizens to aid VIDA in their efforts. In it’s third year, the event has grown into a marathon day jam packed with writers of all shapes, sizes and dietary tendencies. Donations made at this event will support the ongoing cost of The VIDA Count, which is largely comprised of subscriptions to the literary journals and periodicals it includes.