To Insist on the Depth and Complexity of Our Lives

You are here: Home / Archives / Featured / To Insist on the Depth and Complexity of Our Lives

In a book I found years ago, Adrienne Rich is quoted as saying, “This is the work I see for us now: to insist in our art on the depth and complexity of our lives, to keep on creating the account of our lives, in poems and stories and scripts and essays and memoirs that are as rich and strange as we are ourselves. Never to bend toward or consent to be rewarded for trivializing ourselves, our people, or each other.”

This is our charge, then. We must tell our stories, rich and strange. And we must share them, as best we can, building our own institutions and crashing the gates of the old ones.

I spent the weekend of September 23-24 at the Baltimore Book Festival, telling people about Split This Rock, the national organization of social justice poets I co-founded almost 10 years ago, inviting them to Split This Rock Poetry Festival in April, and encouraging them to sign up for our Poem of the Week. I directed them to The Quarry, an online database we’ve built of all the poems we’ve published that’s searchable by social issue–racial and gender justice, for example.

The Quarry is designed precisely to help answer Adrienne Rich’s charge, to amplify our “rich and strange” stories. It contains almost 500 poems by contemporary poets–mostly from the US but a few from around the world–by poets at all stages of their careers, representing all of us: poets with disabilities, poets of all races and ethnicities, all genders and gender identities, sexual orientations, class backgrounds, immigrants, with different religious beliefs and none, from all over the United States.

Organizers use The Quarry to bring imaginative language to social movements. Educators teach from it, so their students learn that poetry is a living art form, relevant to their lives. Faith leaders and musicians and dancers have found inspiration in its many urgent voices.

When I was able to engage passersby I talked about justice, not knowing that the usurper in the White House had just called football players sons of bitches for exercising their fundamental right to free speech by kneeling during the national anthem in protest over police brutality against Black and brown people.

“Do you like poetry?” I happen to ask a young teenage girl exploring the Baltimore Book Festival with her dad. She is African-American, perhaps 14. Her eyes widen. “I love poetry,” she says. “Usually,” I say, “we publish adult poets in our Poem of the Week series. But this week we published the first Youth Poet Laureate of United States, who’s a Black woman. There’s a small box on the home page of our website where you’ll see her name, Amanda Gorman, and a brief excerpt of the poem. You can click there to read the whole thing or watch the video of her reading it at the Library of Congress. Or both.”

This young poet opens up as I speak. “I’m going to do that as soon as I get home.” I give her a pen and a sticky pad and her dad buys her a T shirt. She lives too far away to participate in our youth programs but she signs up to get the poem each week via email. I hope she’ll come to the festival in April.

The weather was too warm for late September, but the days were sparkly and clear and Baltimore was out in all its glory: big, multi-generational families of all colors and hues. An African American teen girl in costume, headed for the Comic Con at the Convention Center up the street, attended by two male friends who were carrying her swords, roadies they confirm when asked. Lots of women in hijab. White men in kilts. Jehovah’s Witnesses in three-piece suits. A middle-aged white couple on the bench opposite us made out for about an hour. Girls holding hands. Black dads pushing strollers wearing T-shirts that read, “Black Dads Rock.”

A man from Ethiopia told me he was a school teacher back home. That many writers and journalists are jailed and tortured by the government there. How much they need us to speak up for them. When he rushed off to catch up with his family in the Kids Zone, I told his story to the young people who’d stopped to learn about Split This Rock, and said, “Lest we forget the power of the word.” And we were all three quiet for a moment.

All weekend long, I thought how beautiful we are, how rich and glorious in our variety of language and love and self-presentation and worship. How normal and extraordinary. And all weekend I almost wept, knowing this is the America Donald Trump and his Nazi enforcers hate, this is the America so many of my fellow white Americans never see, never get to see.

Many VIDA Review readers will be familiar with the long struggle to make the Laureateship more representative of our nation. During those 42 years, we’ve had 15 white male poets laureate, three white female laureates (Mona Van Duyn, Louise Glück, Kay Ryan), two Black female laureates (Rita Dove and Natasha Trethewey), and in a final and inspired choice, influenced in part by advocacy led by Split This Rock, a Latinx laureate at last, Juan Felipe Herrera.

And so we found ourselves here, on September 13, 2017, as Dr. Hayden was to present her first appointment as US Poet Laureate, herself also an African-American woman, Tracy K. Smith. But first Dr. Hayden was to introduce the first Youth Poet Laureate of the United States, a young woman from Los Angeles named Amanda Gorman, also African-American, who also incidentally has a disability.

Three distinguished Black women on the stage at the Jefferson Building of the Library of Congress. Streaming live on the web. Both Amanda and Tracy gave stunning readings, of course. And there we were: America. On stage, in the audience, at the open reception afterward, hobnobbing, crowding the food table, taking selfies with the famous poets, youth and adult. Librarians as superstars.

Back in 2006, we began dreaming of what became the first Split This Rock Poetry Festival: Poems of Provocation & Witness. The first fest took place in March 2008, on the fifth anniversary of the US invasion of Iraq, making the next festival in April 2018 our 10th anniversary. In those chaotic early months this moment at the Baltimore Book Festival would have been inconceivable to me: standing in the sunshine talking with this young woman, and the possibility on her face and in her poet mind as she listens to the account of these Black women on the stage at the Jefferson Building in Washington, DC. And I want to say their names and titles again: Librarian of Congress Dr. Carla Hayden, US Poet Laureate Tracy K. Smith, US Youth Poet Laureate Amanda Gorman.

Also inconceivable, The Quarry: almost 500 poems gathered in beautiful, contentious, raucous, joyous, comforting ruckus over here at www.SplitThisRock.org – and more every week. It’s like the crowd at the Baltimore Book Festival, only searchable by theme and identity, and curated by three really cool lady poets, Split This Rock Managing Director Camisha Jones, Poetry & Social Justice Fellow Simone Roberts, who is also Managing Editor of The Quarry, and myself.

Just as Adrienne Rich asked of us: Hundreds of writers creating the accounts of our lives, never consenting to trivializing one another or ourselves. For that girl at the Baltimore Book Festival and the many millions like her. I’m glad we’re doing it together. 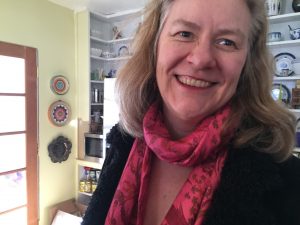 SARAH BROWNING is the author of Killing Summer (Sibling Rivalry, 2017) and Whiskey in the Garden of Eden (The Word Works, 2007). She is co-founder and Executive Director of Split This Rock and an Associate Fellow of the Institute for Policy Studies. She is the recipient of artist fellowships from the DC Commission on the Arts & Humanities, the Virginia Center for the Creative Arts, the Adirondack Center for Writing, and the Creative Communities Initiative. She has been guest editor or co-edited special issues of Beltway Poetry Quarterly, The Delaware Poetry Review, and POETRY magazine. Since 2006, Browning has co-hosted the Sunday Kind of Love poetry series at Busboys and Poets in Washington, DC. She previously worked supporting socially engaged women artists with WomenArts and developing creative writing workshops with low-income women and youth with Amherst Writers & Artists. She has been an organizer in public housing communities and a grassroots political organizer on a host of social and political issues. Photo by Nikki Brugnoli Whipkey.