You are here: Home / Archives / Featured / The Invisible Latina Intellectual

I am 44 years old, almost completely grey, have three degrees, including a Ph.D. in English/Latinx literature, and on a regular basis my colleagues tell me, “You look like a student.” Without my prompting them in any way, I suspect after they realize that they are erasing my wisdom and experience as a scholar and educator, they always say, “But you should take that as a compliment.” I don’t. I take it as their refusal to see me as an equal. I take it as their refusal to accept a dynamic that isn’t colonial, one where there isn’t a white teacher at the head of a classroom, but instead an experienced mentor who shares the culture, and often color, of the students.

But this isn’t anything new. Presumed Incompetent has covered this ground with unprecedented depth and poignancy. The hard work of women scholars of color is erased every day when they are assumed to be students, grounds workers, or underqualified in some way. Hannah Giorgis has attempted to prepare young women for this challenging hurdle by creating a list of successful women who share how they were underestimated. The most recent example had a media personality questioning the intelligence of Mexican valedictorians. The underestimation of women of color, who often do not share the economic privilege of our white sisters (who are often underestimated, too), takes on an especially painful face. Judith Ortíz Cofer writes about this in the widely read and published The Myth of the Latin Woman, where she explains how frustrating it is for a Latina intellectual to be judged by what she wears, especially if any color is used, or to be given a double-take if she uses “big words,” as if the entire English vocabulary were not at her disposal.

Why is it still so difficult for people to accept Latinas as leaders and intellectuals? A recent New York Times article asks, “What has happened to the powerful women of South America?” in response to female leaders who have been taken out office or whose popularity has sharply declined. One person interviewed replied it was a “logical response,” based on traditional male leadership. But in the United States, there are women of color who are synonymous with intellectualism and who are household names. Chimamanda Ngozi Adichie was made a household name by Beyonce, as was Beyonce’s critic, bell hooks. Heck, just by association, Beyonce is considered an intellectual worth of study now. And everyone knows who Maya Angelou and Toni Morrison are. Why don’t we have the same kind of cadre of names within the Latinx community? Yes, those of us who have access to higher education know about Gloria Anzaldúa, Cherríe Moraga, and their seminal work, This Bridge Called My Back, but they and their groundbreaking anthology still aren’t household names. Why?

The answer is simple. We don’t promote Latina intellectuals outside of Latina circles and we do promote extremely limited Latina images worldwide. What Ortíz Cofer wrote about 23 years ago is still completely and entirely true today. The majority of images of Latinas consist of very poor women with limited resources either in barrios or in countries bound to colonial and post-colonial economic systems that continue to oppress. Furthermore, these images are juxtaposed with desperation that, in some bizarre, mythological storyline, leads to indentured servitude, prostitution, or violence. The imaginary we’ve created simply refuses to see the reality that Latinas are hard-working nerds, scholars, intellectuals. For example, here is what came up when I searched “intellectual women South America”: 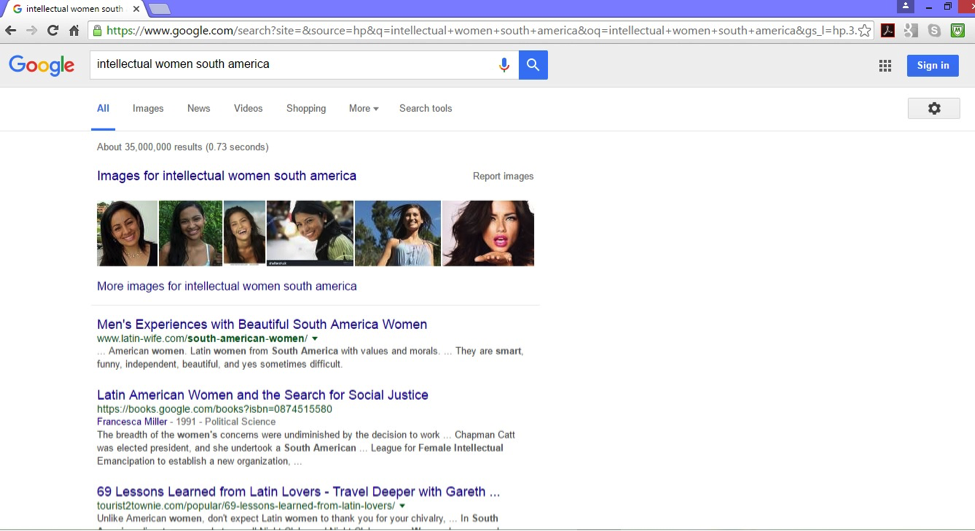 How in the world did that search bring up an image of Adriana Lima? At least the second link is close to the subject I typed in, but the reality is that the majority of links were geared towards men who wanted to have “relationships” with South American women. Then, I decided to specify a bit more. I searched “profesoras Colombianas,” and this is what came up: 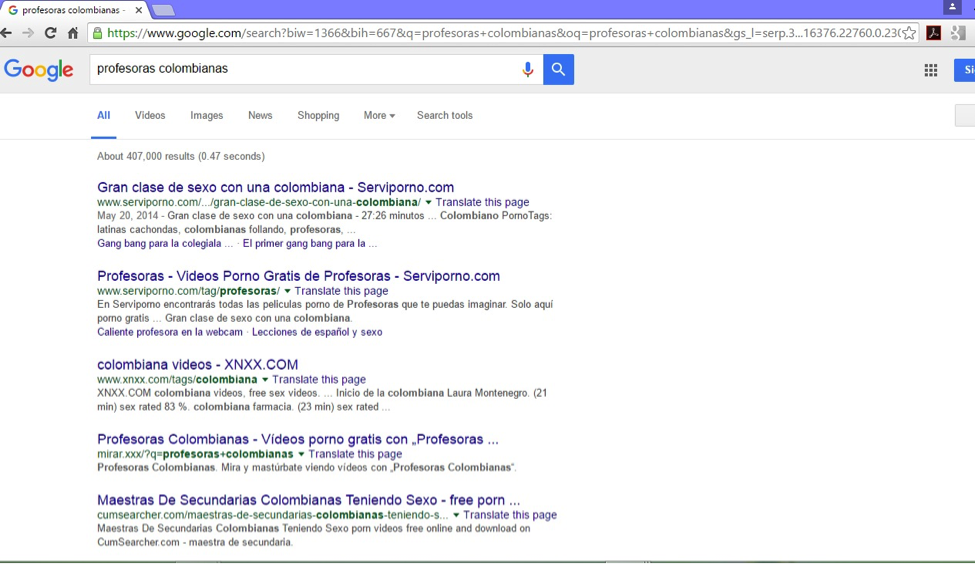 I did not expect a bevy of pornography. Mind you, I have my settings on “Safe Search.” Luckily, my search of “Latina leaders and scholars” was much more successful. Not a derogatory site in the bunch. So, there is hope. We can change the imagery that is forced upon us if we flood media, minds, and spirits with who we are. Those of us who have the power to do so, we must take the task on, but it cannot be limited to academic circles or media that is only directed towards Latinx audiences. We must overpower everyone—I mean it; get annoying—with the idea that we are intellectuals, not meat on a rotisserie. It’s not about being uptight. Latinas will always be ready to dance, joke, and look beautiful on their own terms, but we need not be limited to those images. No, it is about rightfully demanding that we be seen for the multifaceted intellectuals that we are. We run businesses, we run households, and we influence the world with our ideas. The world needs to expand its idea of us because it is a human rights issue. We will not be respected and valued until the world sees us completely, clearly.

There are specific Latinas who we should follow and promote if we want to evolve culturally.

Dr. Amalia Mesa-Bains is a Mexican American artist, psychologist, and scholar who earned a MacArthur Fellowship in 1992. Her conversation with bell hooks, in the book homegrown, teaches me new things every time I read it. It is riveting.

Quiara Alegría Hudes is a Puerto Rican and Jewish Pulitzer Prize-winning playwright who wrote the book for In the Heights and has countless other award-winning works. Her works are unapologetically diverse and rooted in Latinx culture.

Dr. Norma Cantú is a Chicana scholar and creative writer who hails from Texas’ Valley region. She has written and edited countless books, but her work as a mentor of other Latina scholars and writers is unsurpassed. There isn’t any harder working Latina intellectual I can think of. She is also a huge supporter of LGBTQ rights.

Camila Henríquez Ureña is a largely forgotten scholar from the Dominican Republic, who later became a Cuban citizen. She wrote about feminism and women in Latin American culture as early as 1939. The City University of New York is looking for scholars to revisit her work and create a new body of scholarship that reminds us of her valuable contribution.

Miriam Jiménez Román is an Afro-Latina Puerto Rican scholar who is widely-acclaimed for founding the Afro-Latin@ Forum, her edited volume The Afro-Latin@ Reader, and her curation of various Afro-Latin@ conferences and events in New York City. She covers Afro-Latinx issues throughout the globe.

Rigoberta Menchú (one of those names academics know, but is not yet a household name) is a Guatemalan leader and activist who has fought for the rights of indigenous people, especially women, in her country and throughout the world. She came from abject poverty and rose to run for president in Guatemala twice. Her account can be found here.

These Latinas are obvious scholars because of their involvement in academic circles. However, we should also re-envision some Latinas in popular culture as intellectuals, based on their thoughtful contributions. I think of women like Salma Hayek, who is considered one of the most powerful Latinas on the planet right now. She made sure the world knew Frida Kahlo’s legacy by producing a film about her, and she has produced Latino-themed television in order to support the next generation of Latina powerhouses, such as America Ferrera, an intellectual in her own right. Others include Soledad O’Brien, who has spoken out about her Afro-Latinidad frequently and used her power to connect Latinx and African American communities. Astronaut Ellen Ochoa should be a household name. Dr. Cynthia Telles, has served health initiatives at the White House and on boards of corporations like Kaiser Permanente. We should know all of these names, and many others.

You can learn more about these Latina leaders here, here, and here. The lists are comprehensive, and they are still a fraction of us. There are so many more Latina intellectuals out there who we don’t know yet. Let’s flood social media with them. Let’s write songs where Demi Lovato and Christina Aguilera quote them. Let’s tattoo ourselves with their words. Let’s become just like them, and still wear a red dress, just to confuse our colleagues. Yes, you can be a Latina and an intellectual. In fact, it seems to me, after what I’ve learned writing this essay, the terms are synonyms. Let’s make the world see that.

Dr. Grisel Y. Acosta is an assistant professor in the English Department of Bronx Community College-CUNY. She received her Ph.D. in English—Latino/a literature, from the University of Texas at San Antonio and has presented and published her creative and scholarly work in London, England; Cartagena, Colombia; Catalonia, Spain; and throughout the United States.  Her creative work is in In Full Color: A Collection of Stories by Women of Color, Nineteen Sixty Nine: An Ethnic Studies Journal, Voices de la Luna, MiPoesias, Pembroke Magazine, Private International Photo Review, ¡Tex! Magazine, the NAACP Image Award nominated Check the Rhyme, Chicago’s After Hours Magazine, and the forthcoming Basta!: 100 Latinas Write on Violence Against Women.  Her scholarly work can be found in The Routledge Companion to Latino/a Literature, African American Women’s Language, The Handbook of Latinos and Education, Western American Literature, Diálogo, and Salon.