Self Censored: When Writing is Not Right

You are here: Home / Archives / Featured / Self Censored: When Writing is Not Right

I stopped jumping in and out of trouble. Once, it was a moving car, my father pissed; the walk home slow and only mildly treacherous. Always catapulting off swing sets well into my teens. I only have one physical scar, the faded rope burn from careening off a Michigan pier, the pylon twisting around my upper arm. It bled through the cheesecloth of my skin, the latex plaster, everything for hours so I couldn’t swim. I’m not entirely certain I wasn’t so much jumping from trouble as trying to live.

I moved to the States, to Acworth, Georgia when I was fourteen. And not quite immediately became reckless with my body in this very specific way. It was the one thing I could control. I was writing but I was aware of my difference, of what I could not say as a non-American girl of colour, and terrified. I’m not sure that is how I articulated it at the time but I am conscious of the fact that I did not write about myself. The protagonists of my stories and plays were outside of my interior life. And this default setting, this unconscious censoring has followed me into my attempt at being a poet as an adult. When I say I stopped jumping, I mean I stopped being brave. Also, stupid. Jumping out of cars and off rotting piers has always been easier than committing my life to the page. So fighting against this confessional impulse has left me wondering if I can even call myself a writer.

The truth is that I do not know how to enter the conversation on poetry, by which I mean the community. Do I even have that right? I haven’t written anything for more than a year. My thesis is collecting dust in a storage unit with more than half my book collection. I tell myself I don’t submit to manuscript contests because I’m not American. I am not allowed to enter these contests and sometimes it is true but more often than not, as one friend scolded me You talk yourself out of running before you’ve even started! Well, yes. I do. I can’t get out of my own way, my own head, the self-censoring, self-protective ego that knows the harsh reality of being and speaking my whole self. These many siloed identities and their individual societal erasures. See immigrant. See woman. See black. In which order should I organize these experiences for public consumption. Again I ask, do I have the right? To be an immigrant in this country, legal or otherwise, is to be on the whole, silenced. Grateful. There is an implicit expectation that you will not complain because even if things are bad here, what you fled was worse. You actually have very few rights besides the sort where you can be arrested and held indefinitely. Freedom of speech need not apply. Foreign national. Alien. That is the word they use. There are years of hoops to jump through before you have permission to stay for good. For me, it took nearly sixteen years, more than half my life. This is not an unusual case. It exhausts. It also makes you more than slightly paranoid about what the government knows about you. I don’t really write about it. There are fewer than five poems in my thesis about this.

But that comes partially from a whole other pressure cooker of silence called family. My family is proud, stubborn and extremely private. We don’t actually talk about what’s happening. Or we didn’t. For most of my childhood, we lived in secrets. In the implied terror of full knowledge and what it would mean. Some of us were really great at it. I wasn’t so I started to write. This was before self-censorship, before anyone in my family thought of me as an individual. I was seven and I never stopped writing and then I was in college and had a blog and everything went to hell quite quickly. Twice. One sibling said I was wrong to write what I did. That word has stuck with me. I interpreted her words baldly. Without nuance. I was wrong. My writing was wrong. My parents agreed. At the time I was still beholden to them. I had already stopped jumping and climbing, more scared of other possibilities like deportation. A possibility that has since swallowed one family member whole. So I deleted the blog and after its second incarnation I stopped writing completely. No more trouble.

I never got over that. I didn’t like being wrong. But in those months of self-imposed restriction I came to realize how much writing matters to me. How much I need it to be sane. I definitely got angry. Seething angry, the sort where you stew for years and never let go. And then instead of trying for a PhD after my Masters, I went for an MFA like the stubborn ingrate I had become. I wasn’t practical as an immigrant child should be. So whether or not I’m a poet, I do need writing. I’m a miserable and nasty human being without it. It’s the one thing I have ever stood up to my family about. I still don’t really speak to that one sister. I have reveled in being wrong.

However, I am always complicit in my own dilemma. I continued to cultivate a multitude of little and large silences to keep my comfort and safety while pursuing my studies. I’m better when I am oblique said no one ever. Unless you’re a poet. Unless you’re creating a second order signification of language through wordplay and theatrics. I frustrated some colleagues with my stripped down verses. Tell me more they said. No. I knew it would be uncomfortable for people if I did. So for a while it was rare that I ever left an image long enough to tell the story. Once, I wrote a poem in which the speaker mentions killing people. The moment is by no means subtle. However, I never mentioned the word white. Still, the silence after I read it in workshop felt deafening. I couched the spiraling anger of the poem in hegemony, and religion, and at the last possible moment flipped to an interior, raw and personal. A lot of my classmates told me to cut those last two lines. I know they couldn’t engage with the race of it. I was pushing at boundaries that room of people weren’t ready to concede. I know I didn’t bring anything quite that bold to that workshop ever again. I was asking for critique. I was actually asking to be hurt in that classroom and I wasn’t. I stopped pushing and told myself it was okay. I went back to self-censoring.

I’m really not a poet. I do not publish enough to really count. I do not have the right. It comes back to that for me. Whether or not I have the right to speak in the community. So much of what I have witnessed in the literary community is a perhaps unconscious privileging of white and male voices. Perhaps. I am deflecting. I am making caveats and excuses for people who honestly, aren’t thinking of me at all. And I participate in their supremacy. I’ve spent so long being this anxious, unquiet person struggling to stay in this country that the notion of fighting for anything else is beyond comprehension. There have been so many roadblocks for so long I see a clear path and assume it is leading me over a cliff when I have long since stopped jumping.

I remember the discord over The Penguin Anthology of Twentieth-Century American Poetry a few years ago. Widely respected critic Helen Vendler wrote a cutting review of its multiculturalism. I recall the page counts of her criticism and her general opinion that the less famous poets should not be included in lieu of other, more established poets. The less famous poets, of course, were mostly brown and black. Vendler’s review title asked if these were poems to remember. This struck me. Hard. So many black voices, whether they are poets or everyday citizens, are silenced daily and the notion of remembering them is somehow offensive. I recall the page counts of her criticism. I devoured Dove’s retort. How my classmates debated. I remember my own reaction. Some colleagues stated they would never buy the anthology, that it was an insult. And I was quiet.

All of this seemed to come directly on the heels of the misunderstanding between Tony Hoagland and Claudia Rankine. I was in the audience at AWP when Rankine spoke her piece. I remember crying and standing up to clap. She was saying this most discomfiting thing and while I was surrounded by colleagues, I knew not all of them may be allies. In the heated aftermath, I was silent around my classmates. Then, another brown colleague wrote a poem about wanting a seat at the table. And brought it to workshop. And I read it out loud while my heart was breaking, also my voice.

I’m still trying to live. It isn’t working. I can’t stop moving from moment to moment in life as though the house is on fire. It was and is. It burnt to the ground and here I am with an extreme case of writer’s block as denial. As a smokescreen against all of the opinions I think people are thinking about me as I write any one of my identities. I already understand that my words will be perverted because of each and every one. This is going to hurt. This will, as always, come out the wrong way and I keep cutting back and away. Editing. But it needs to be done. I should speak. If only to be sane. 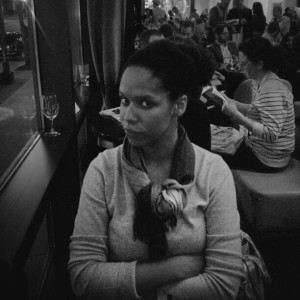 Abba Belgrave was born elsewhere but calls Brooklyn her hometown. A graduate of NYU’s Creative Writing Program, she was published in Argos Books’ anthology Why I Am Not A Painter. She currently balances her work as Interviews and Reviews Editor for Phantom with her job at a consulting firm in the Financial District.