Report from the Field: “Naming Is the First Step”

Recently a piece has made its way around poetry circles via the relatively obscure web lit magazine, Claudius App. Written by “Jacqueline Rigault” and skewering dozens of poets, both well-known and emerging, the piece on its surface is just the kind of sensationalistic silliness we imagine the journal’s editors hoped would make the rounds and, in turn, a name for the editors and their project. And it did, but likely not in the way they expected. You see, the joke was sour out of the gate and even the most casual reader found the misogyny obvious and off-putting at best. While most of the male poets mentioned in the piece are skewered for reasons of talent, many of the women poets are spoken about in terms of their physical attributes. One young poet, Cassandra Gillig, was referred to as “statuatory,” illustrating how casually rape culture is perpetuated by some in even the supposedly progressive lit scene.

The author of this piece is not “Jacqueline Rigault,” not, in fact, a woman at all, but a young man named Jeff Nagy, who is also one of the editors of the Claudius App. Once the backlash began, Nagy began switching poets’ names around, hoping to avoid the stain of misogyny on his reputation and that of the journal because, unfortunately for him, Nagy didn’t realize his words would come across offensively until readers screengrabbed and began sharing excerpts from the original.

We reached out to poet Eileen Myles, who had this to say:

“Mostly I was offended by the guise of being female as author. it’s the oldest trick for a cowering man – or one who wants to do his dirty deed without harming his own name. And then of course shit talking women as a woman. The US government does it in other countries when it wants to get rid of governments they don’t like. Counter revolution. Infiltration of the crowds. Really too many women are being heard from abundantly in the poetry world and we must reinstate the rule of men. I think there was some sneaky poetry camp spitting too – Dottie, Adam and Tim were singled out and that meant they are not “our” white man’s tribe. He seems to abhor the mixing of worlds. Yet he wants what they have I believe. Why not write a review, Sneak. The problem with reviews is you don’t get to attack the person. Somehow as a pseudo French woman I think he assumed he would get a pass on that kind of attack. Finally I was thinking about a Leigh Bowery performance in London in the 90s I heard about in which he was performing an enema on himself on stage. The action backfired literally and he got shit all over the audience. I don’t think the people shat on here are the readers or even the subjects of his rant. I think the poets whose work are in Claudius app are made complicit. By roping them in here, the unnamed author (I don’t know him) used their credibility, their work to erect a platform of attention for his unhappy whine. Again my own work is not even mentioned, I’m more of a thing in here, kind of an old moral failure which is true and stupid and irrelevant.”

Perhaps the most vitriol was hurled at poet Dorothea Lasky, who was demeaned in highly personal ways. 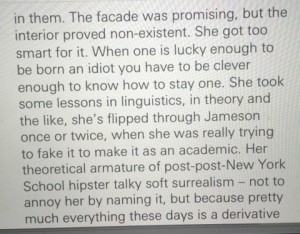 Lasky had this to say about the experience:

“We operate in a time in contemporary poetry where half-thought-thru social experiments may start becoming the norm because of the immediacy of readership on the internet and the ability to use a real name to get such readership—to create this potentially interesting gotcha moment. This is going to be great when really cool things are created and of course, some have been already. But no, this whole thing wasn’t cool. No, not even ugly—just profoundly depressing. It’s true that I had never read a word of this poet/”reviewer’s” work until he used my own nickname and my friends’ names in his piece (among them the greatest poets we’ve got). I would have never read his work if he hadn’t

used real names, and I don’t plan to read his work again. By using a female pseudonym, and by exposing an awful misogyny, he created a breeding grounds for female poets to potentially ask the worst questions about themselves, that it is somehow true that no matter what a woman does in her life, no matter how hard she works, no matter the character of her soul, beyond this living flesh—that could it be true––that all that matters in the life of a woman is the judgmental gaze of a man? Could it really be that such a vile instinct is considered hip and an ok thing to do? If the answers to these questions are even a half-yes, then we have a lot of work left to do.”

Along with many others, both Lasky and Myles share our concern for the content and tone of Jeff Nagy’s piece. If misogyny is unremarked upon and allowed to thrive in the quirky hipster circles of the poetry world, then the entire writing community, as Lasky states, has a lot of work left to do. Instead of simply supporting publications like the Claudius App who perpetuate a hatred for female poets, we can at least call to public attention the derisive ways they frame and position women writers so that future contributors might think twice before hitting the send button. We’re grateful to Myles and Lasky for speaking out, and to the community at large for calling this, and other like occasions, out and their willingness to expose Nagy’s misogyny, rather than just leaving it to fester and work its subtle damage across the literary community.