Report from the Field: On Grief

You are here: Home / Archives / Featured / Report from the Field: On Grief

Because it’s afternoon. Because the sun is setting. Because I’m followed home at night and to work some mornings. Because I looked upset. Because it was Monday. Or because it wasn’t. Because I smiled across the train, he stuck his hands down his pants.

Even though I’m not listening to music, I’ve learned not go outside without headphones in my ears. My headphones are my best defense against sexual or racial street harassment. My best defense against being aggressively harassed or followed for being the “bitch” who thinks she’s “too good” or the “nigger bitch” who “doesn’t know her place.” With my headphones in I can disengage from the harassment while remaining hyper aware of my safety. I can be disregarded, at times “forgiven,” simply because men think I can’t hear them.

I call this troubleshooting oppression. Instead of “cunt,” I get the tempered down (though more menacing), “I’ll see you soon baby.”

As an African-American woman with degrees in Poetry, English, and Economics, I’ve spent a large portion of my life examining and trying to come to terms with language. I’ve learned that language is currency, trust, and betrayal.  It is one of the many things doled out in unequal parts and one of the few that doesn’t require walls to incarcerate you. From an early age, my parents taught me the necessity of code switching and though I benefit from the mobility of knowing America’s dominant language, I continue to suffer from the erasure of living inside of it.

Perhaps what I find most fascinating about language is that it can both discriminate and be discriminating. It can impose harm or it can repair. It is in our mouths, on our buses, and trains. It’s graffiti, our hips, and our hands. We’re never not communicating. But for some of us, language is a tool used to violently or subtly subvert who we are.  Inherent in language is choice and as languages disappear every day at impoverishing rates, I am continuously surprised by the ways we choose to use it.

The other day, at a coffee shop in Fort Greene, Brooklyn, two white women in their mid-40s discussed Mike Brown, the unarmed black youth gunned down by a white police officer in Ferguson, MI. One of the women remarked in regards to black people, “I just think the whole culture could use a facelift,” the other woman nodding in agreement as if together they had just hit a nail on its head.

How casual the racist.

A day or two later, I found myself walking behind a group of white men in their mid-20s, one who is apparently, “banging a black chick.” As I listened to him tell his friends that “everyone needs a little strange,” I couldn’t help but wonder where this falls on the line between microaggressions, racism, and misogyny. I couldn’t help but wonder, does a black woman’s body belong to everyone? For most of my life I’ve experienced black women (and thus my own image) depicted as the jezebel, the mammy, the sassy “urban” friend, or completely and utterly erased.

But it’s more than that. On my commutes, language is everywhere— advertisements that follow me home. Two, in particular, I see everywhere. The first from the MTA questioning, “At age 80, who doesn’t need a facelift?” I touch my face, the creases that have settled along my neck. I look around to a half a dozen women doing the same. I notice that the men, as they often do, look comfortable. That this is the work of the city, I’m not surprised. I have no surprise left in me.

The second advertisement is for a new ABC TV show called Black-ish because why does Tyler Perry get to have all the ideas? Because isn’t it funny when black people have nice things? Because blackness is synonymous with violence and poverty. Because prosperity is a betrayal to our blackness. Because black history means fried chicken and hip hop instead of Phillis Wheatley and Garret Morgan. The whole premise of the show seems to be the pursuit of “authentic blackness,” its comic relief relying on the reduction of history and cultural amnesia— old, destructive tropes such as Tracie Ellis Ross’s character, being told she’s “technically not even really black” because she’s bi-racial.” Yet, this show was created by people of color. FML. I want to stand on street corners and read aloud The Bluest Eye until we stop internalizing and feeding racism to each other. Until we lose the phrase, “you talk white,” or “good hair.” Until I forget that it was my American cousins who first told me, “go back to Africa.”

I began this essay with a simple idea: What would I hear when I turned the silences off and tuned the world back in? Like every day, I kept the music off and my headphones in, but this time I put away the silences that allow me to survive the indignation of walking around this world. I meant to make it a full week, but after four days, I didn’t much see the point. During this period, I was perpetually reminded that there is little value placed on my gender or race. Food, especially sandwiches, is being raped at alarming rates (i.e. I’m so hungry, I’m totally going to rape that sandwich), as are presentations, meetings and sporting games. Do you know what it’s like to hear multiple rape jokes every day for days on end? Of course you do.

Every day, I’m told “smile.” I’m told, “can’t be that bad honey.” Told, “you’re too pretty to be alone.” “Hello” has become, “Hey, ma.” In Lean on Me, Morgan Freeman says all he has to do is “stay black and die.” I’m starting to see how one leads to the other. I’m starting to see how distinctly the line is drawn between “woman” and “black woman.”

Every day, I encounter more bigots than allies. This is what it is to be a black woman.

I am far too aware that in many aspects, men, regardless of race, age, geography, or economic standing, have more agency over my body than I do. And I am far too aware I’m not “that kind of black.” Our recent history is so complexly marred, that to consider it alongside the whole history of colonialism/zation, is like poking at a sore with a stick. To remember this last decade accurately we must remember Mike Brown, Renisha McBride, Trayvon Martin, Rekia Boyd, and Islan Nettles. We must remember Representative Todd Akin saying, “If it’s a legitimate rape, the female body has ways to try to shut that whole thing down.”  To remember this last decade is to remember it as the decade people have felt for the first time, in a while, safe to take off their hoods. It is these moments, rendered collectively, that remind me there are no vaccines to America’s –isms, no vaccines that will render me visible.

But I’m still trying to understand what has damaged me most— is it that the outrage settles? Or that as an African-American woman in this country, language does not work in my favor.  It doesn’t do the same work for me as it does for a white person, or a man, and so, language must not mean as much to me.

Dear America, We are at war with ourselves.

And yet here we are. The “we” of otherness, “we” who are even our enemy’s enemy. “We” who’ve been told, we can only bring a knife to the gun fight.

In his TEDTalk, “On Humanity,” Chris Abani states of grief, “It will always be difficult, but if you cry like this every time, you will die of heartbreak.” Perhaps this is it. Because language is a kind of grief, isn’t it? 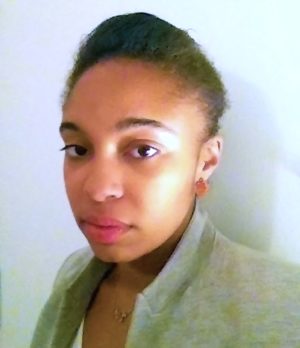 HAFIZAH GETER is a South Carolina native currently living in Brooklyn, New York and a Cave Canem Fellow. The recipient of a 2012 Amy Award from Poets & Writers and a 2014 Ruth Lily Finalist, her poems have appeared or are forthcoming in, RHINO, Drunken Boat, Vinyl, Columbia: A Journal of Literature and Art, Linebreak, Narrative Magazine, and Gulf Coast, among others. She is a poetry editor at Phantom Limb Press. www.hafizahgeter.com

Together we can build a community strong enough and courageous enough to call out sexism and misogyny as we see it. Send us your Reports from the Field (essays, screen shots, whatever): lmelnick@vidaweb.org. For other concerns relating to this or any other VIDA content, email aking@vidaweb.org.