Report from the Field: The Poet as Beginning Mother

It was October and I was thirteen. On the bright car ride home from school, my dad told me my older brother Will had died. He hadn’t been sick. I didn’t understand. When my dad started to cry, I shushed him, told him it would all be okay. At home, I ran upstairs to check under Will’s bed for him. A few days later, I snuck down to the basement and wrote around twenty poems on my dad’s Windows. I showed them to my mom before swearing her to secrecy, hoping they would heal her faster. She cried as she read the book, but not, she said, because she was sad.

Later, she drove to the copy store and made twenty copies of the collection. At our house, after the service, she passed the poems out to my relatives. For a long time I could hear her reading aloud in the living room to whoever would listen. Will, you were a leaf / and you fell / I hate Fall now, I’d written. She’d put photographs of my brother and me on each page.

I knew that as Will’s mother she had it much worse than the five of us who were left, but I never looked at those poems again. My grief, its very first blossoms, she’d shown to everyone. While I couldn’t stay mad at my mom, I could hide my writing, and therefore, my grief, from everyone thereafter.

Over the next thirteen years I wrote about my brother in my poetry almost exclusively, though evasively. I never ever spoke of him, haven’t said his name to anyone since he died. But I healed, slowly, and in my own way, because of poetry. As the years passed, I got through each October by counting them, writing the details in my October notebook. I turned twenty-four, fell in love with a writer fifteen years older than me, Andrés. I got pregnant, accidentally, and started feeling haunted by my brother’s death. I was sure that I could not have an abortion, sure that I would lose the baby anyway. Sure that I would die.

My one comfort was that the ghost baby on the ultrasound was a boy. I could protect the baby from being female, the part of myself I least understood or faced. Andrés and I had both worn blue to the appointment. When I was ready to tell people about the pregnancy, my mom was more excited than anyone. She was certain everything would go smoothly, perfectly, even though Will had been born blue and had died blue.

The birth was a brutal sixteen-hour ordeal that ended in a cesarean. After it was over, Andrés handed me our son, who we called Félix because it means happy, and, instinctively, I kissed my baby on the mouth. But being a mother did not come naturally to me. I simply did not want to be one. Since thirteen, I had worn a t-shirt over my bikini, hating being female in public. Pregnancy and motherhood felt like being female, like wearing a bikini under fluorescents, all the time. And I wasn’t alone—not ever, worried sick Félix would stop breathing if I closed my eyes. 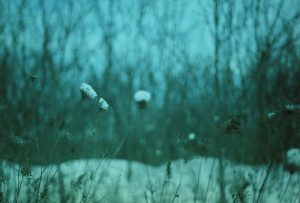 A year later, we moved to a bright townhouse with three floors and more space for each other. Time had warped since I became a mother. It wasn’t just the sleep deprivation; it was the monotony. Every day my primary function was being female. Every day had a structure, a routine; it rained or it did not rain. My breasts ached. I longed to be alone, to not be touched. Sometimes white snow would be on the ground, sometimes white flowers.

When I emerged from the house periodically to teach a class, I felt the time that had passed while I’d been cooped up being a mother. Most of my friends, peers from the writing program, had left town, written their first books, won prizes, gotten married—life things in the proper order. Very few had had children, but the ones who had seemed to have done so effortlessly without any scars. I felt behind; I could not remember anything that had happened to me. I had taught two courses at the university. Félix had doubled his weight on my milk. The color beneath my eyes had darkened three shades. But I had no recollection of what I had felt. I couldn’t measure it anymore because I’d stopped keeping a notebook, stopped reading, stopped writing poems, stopped answering calls.

When Will died, I had just started going through puberty. I hid my period for eight months, even lying to my pediatrician about it. Now again, I felt the familiar desire to conceal what I was going through. I didn’t think motherhood was a legitimate topic for poetry. I knew no poet mothers; I had only read of them, of what motherhood had done to them. None of the women in my poetry program had children. To me, being a woman poet in the program was about being young, attractive, and full of potential. A child, in my eyes, felt like the end of all potential—a question answered already, narrowing my work before I had written it. Motherhood felt so much like grief and I had been embarrassed by grief since Will’s death. I told myself: Your poems will differ. Your poems will suffer. Your poems will want to be female. You’ll write about being a mom even when you don’t.

When my best friend sent me an anthology of poems about motherhood (I wondered, these exist?), I found “Child Burial” by Paula Meehan. I almost can’t read this poem, but I have to in order to get to the last line.

She writes, I would travel alone to a quiet mossy place, / you would spill from me into the earth /drop by bright red drop.

In this incredible gesture, Meehan imagines the beginning of her child’s life as utterly precious, something she would do anything to get back, even give back, so that her child wouldn’t have to die, going to the end of her imagination before the child’s conception. After reading this poem, I began to see my own son’s life as a miracle, something I had the honor of witnessing, mothering, and even writing about. Reading women like Paula Meehan, Sylvia Plath, Louise Glück, and Louise Erdrich who wrote explicitly about motherhood gave me the courage to listen to my voice, its femaleness—not just the grief but the creative power of it, too. I let myself feel like an animal, what Andrés kept calling me as he excitedly recounted Félix’s birth story to everyone weeks after. Tell me what happened again at the hospital, I would sometimes ask him. In his version, I was the strong one, and not because I had suffered. In the story I told myself, I was barely there.

When I finally started writing, usually in a sleep-deprived translucent state, I submitted my poems without using the word “mother,” my bio without my son’s name even though he was everything at that moment. In fact, I didn’t tell anyone I had a son unless I had to—just like I didn’t tell anyone when I was pregnant or that I was sick after he was born, that I understood why mothers walked into rivers and didn’t turn back or put their crying babies down in a safe place so they could go scream in the bathroom. The first time I used “mother” in a poem, I felt a gush of relief, like I’d just given birth, like I’d found a way through the river I hadn’t seen. 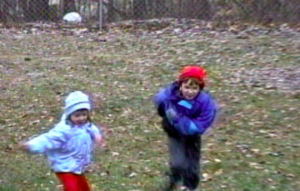 When Félix started talking, little animal sounds at first, I was glad his brain was lighting up in my brain somewhere, that he had left his cells there. My old brain seemed boring, marred by a too long grief—wiped out with gray paint. My son seemed to me the most wonderful accident, that is, not even an accident anymore. I started signing my letters to him as “mama,” not “Anna.”

I wouldn’t say I am close to understanding what my mother went through now, but I have been an intimate witness to her grief almost my whole life. Every time I heard her sobbing, I would find her, always somewhere new in the house, and hold her. Every time I heard her run the bathwater, I would listen from behind the door for her to turn it off. Since I became a mother, our relationship has grown, more rooted in the living than the dead. “You have given me a reason to live,” she told me once. I can face her now as a woman—she must have been my first love. Andrés told me I asked for her while I was in labor. She wasn’t there; she was sitting next to my dad on the blurry roads from Georgia to Iowa, but I heard her voice. Before my love kicked in, it was her love I felt sustaining Félix.

Lately, she’s been sending Will’s old favorite books for me to read to Félix. One book in particular, Love You Forever, I can’t read without crying. “As long as I’m living…” I prompt Félix who sits on my lap. “…my baby you’ll be,” he says. The picture that gets me is a portrait hanging on the old mother’s bedroom of her son as a baby. Above my mother and father’s bed hang four portraits, one of each of us. She never took down Will’s picture. There he is, about a year old, looking too sad for such a beautiful young boy. Sometimes I see Will in Félix; these are my absolute favorite moments, my brother’s little light (or are those his cells?) flickering from inside him before I can capture it, before I can write it down. 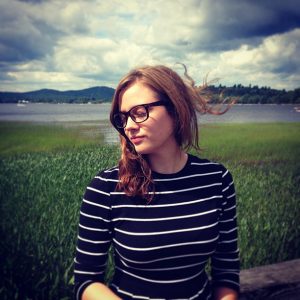 JULIA ANNA MORRISON is a poet from Alpharetta, Georgia. She has an MFA from the University of Iowa Writers’ Workshop and her recent work has appeared in Ploughshares and is forthcoming in The Bennington Review. She lives in Iowa City with her two-year-old son and teaches screenwriting at the University of Iowa. Visit her at juliaannnamorrison.com.