Report from the Field: The Fearful I: Confessional Modes of Address and Speaking the Self

You are here: Home / Archives / Reports from the Field / Report from the Field: The Fearful I: Confessional Modes of Address and Speaking the Self

When I crested 12 and took the first tentative steps down authorship’s overgrown path, the trees and buzzing insects spoke with the voices of Sylvia Plath, Sharon Olds, Adrienne Rich. Soon enough, I’d hear my fellow travelers whispering of those poets’ myopia, unfortunate preoccupation with the body, a certain lack of seriousness. These, among many other undesirable traits, made their work minor and provincial, never scaling the heights of those not afflicted by their addling curse of birth.

Looking back at my junior-high poems, bound at Kinko’s in a fit of optimism, I certainly see limited vocabulary and childish syntax, but along with that, an enviable looseness and a voice that felt itself to be naturally in dialogue with the whole scope of human and poetic history. I’m not sure when I first heard the derisive snickers that follow any mention of Plath and her compatriots, along with the frequently-hurled epithet “confessional,” but by the time I started college, a fundamental shift had taken place—the I had been excised. This, I’d have readily related, was due to my seriousness, universal aims, and all the interesting things I wanted to do.

If there was a conscious moment of decision, I don’t recall it, just a sense that I was growing up, putting aside childish things, becoming a real poet. Of course, at the same time, I was moving through adolescence in a fat woman’s body and becoming aware of my queerness. Both realities were faintly mortifying and provided an even greater incentive to shed the faulty flesh and ascend to literature’s exalted environs. I wish I could say that this story had a villain, some teacher who scoffed at my earnest scribblings, but it was gentler, more heartbreaking than that—a gradual introduction to a canon where women and other marginalized folks were relegated to an anthropological footnote, important only for the societal conditions they’d unwittingly recorded, their historical value.

Those were years of turning away, when I was both compelled to speak and terrified of doing so; I justified, positioned myself at flattering angles, while others simply wrote. Ironically, I was reading a lot of Jim Harrison, especially his ghazals; although my page was a frozen tundra, lifeless as a corpse, at least I could warm my hands at the red-hot furnace of someone’s carnal (and literal) appetites. It certainly helped that those appetites belonged to a man, someone assumed to be expansively, passionately engaged with the world, in other words, a subject. My own appetites, although they buffeted me constantly, had been relegated to the cupboard where I jammed everything I’d learned was intense—too-large body, loudness, sense of humor, raunchiness. And, given that my looks already put me at a distinct disadvantage, I worked extra hard to maintenance surfaces, suppressing everything that marked me as more than a pleasant ornament who wrote prettily but didn’t call too much attention to herself.

Eventually, though, my masks started to slip. To my own discomfort, after reading about a bathhouse fire in the ’70s, I began writing a long poem entitled “Faggot Autobiographies,” where different queer speakers throughout the 20th century spoke of their hiddenness. I don’t remember much, save one section where a nun envies the way a braid caresses her fellow postulant’s neck. Unsurprisingly, my MFA workshop found the title unbearable and attested to its offensiveness, neglecting to consider why I might have chosen that word or what it could have meant to me or to the poem’s speakers. Afterwards, as I gulped back tears, the only other queer student handed me a scrap of paper where he’d scrawled, “Love you, faggot.” Despite the rest of the class’s reaction, my real audience heard me and reached across a gulf to take my hand, and I kept that note tucked in my wallet for years.

Yes, the tide had begun to turn, and a gnawing uneasiness started to accompany my accustomed forms of address. Not only was we vague to the point of presumptuousness, I found myself wondering, within society’s fractured confines, how could I presume a communal voice? In my white hands, how could we read as anything other than a coercive assumption of a palatable collective, flattened and reduced to fit the limits of my experience? Similarly, you started to turn my stomach. Where its hazmat suit once allowed me to approach difficult material safely, it was now obviously a coward’s hedge, a purposeful distance weakening my work from within.

Out of my MFA and free of weekly workshops, waitressing and writing poems on scraps of paper in my apron, I wondered, who’d taught me that my voice was so illegitimate it had to be laundered through the collective? And why, again, was the I unseemly, even crude? I didn’t have the answers, so began a trembling, tentative turn inward and soon watched walls I’d spent years erecting dissolve, and parts of myself I’d kept at bay loom out of the mist like a vast skyline. The first sign that I was headed in the right direction was the sickening anxiety these new poems occasioned. The next was that I started to actually have fun; as soon as I brought my whole self to the page, the voice that long eluded me solidified. It had so much to say about queerness and desire, experiences of sexual violence, and yes, the much-mocked body. It even had a sense of humor! Although I’d certainly taken long enough to get there, creeping sideways like a crab, it suddenly seemed clear—while I’d been aiming for universality, I’d been trying to write like a straight man, for straight men, and that hampered me, tied one hand behind my back. I was the same writer—with the same odd obsessions—but it was suddenly much easier to speak.

It’s been nearly a decade since, and I’m coming to see that this was when I truly learned to write, a process painful as walking on a half-asleep limb, all pins and needles. But, for the first time since my formal poetic education began, I now find myself in dialogue with a vast mystery that I’m gratefully in service to, a whisper I’ll spend my remaining years bent toward. Yes, that’s ambiguous, not concrete in the least. But I’m becoming someone who’ll say what she knows to be true and trust the reader to reach across the gulf, just as my fellow queer poet did after that heartbreaking workshop so many years ago.

Serendipitously, while drafting this essay, I ran into a long-lost friend from that cohort in a smoky gay bar in Tampa. Turns out that she’d recently related that incident to her students as an example of how workshops can fail their participants. She expressed regret about not sticking up for me then, and from her perspective as a professor, questioned why the class hadn’t been better managed. Here was the closure I didn’t know I needed—assurance that I hadn’t remembered wrong or exaggerated. A weight lifted, and in so doing, demonstrated how much more I have to unlearn, how much of myself I still question and minimize.

On the cross-country flight home, as I reread Plath’s Ariel for the umpteenth time—the original resurrected from her papers, before it was mangled by her widower—the bee sequence’s “Stings” startled me into tears of recognition:

[I] Have a self to recover, a queen.
Is she dead, is she sleeping?
Where has she been,
With her lion-red body, her wings of glass?

Now she is flying
More terrible than she ever was, red
Scar in the sky, red comet

I feel myself testing the air too, slowly rising on its currents. Yes, I’m back at the beginning, but at least I trust my own wings, the vague instincts that urge me forward. 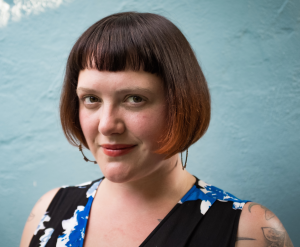 LUIZA FLYNN-GOODLET is the author of the chapbooks Unseasonable Weather (dancing girl press, 2018) and Congress of Mud (Finishing Line Press, 2015). Her work can be found in Third Coast, Granta, Quarterly West, DIAGRAM, The Rumpus, and elsewhere. She serves as poetry editor for Foglifter Press and lives in sunny Oakland, California.