I’m sitting with my friend Ronna Lebo at a cafe. We’re talking about Boni Joi, a close friend of Ronna’s and a new friend of mine. Boni is also an accomplished poet.

I’m telling Ronna, “The thing that got to me about Boni’s work is her ability to electrify inanimate objects.” Ronna and I agree our work is more similar in the way that we both aim to describe humanity and the meaning of life through characters, but we both deeply admire how Boni’s able to do this by juxtaposing people to the things around them. They are two, very different poets, but both of these women have inspired me, and I’m able to tell them specifically why.

I’m taking a break at work and submitting to literary journals. Half of them ask for bios detailing my background, but what it seems they really want to know is, does this girl have credentials? I wonder how much bragging I have to do and if it even matters. Do I tell them how many books I’ve sold? How often I get requests for new orders from stores? I decide to leave the metrics out and stick with the basics. If they like the work, it will speak for itself. A month later, I log in to Submittable to find more than half of my submissions haven’t been opened. Perhaps I should have filled in that bio after all.

I’m doing a reading at a literary festival. A girl I know through the scene who’s been getting tons of write-ups and work published greets me after the reading. She tells me she “liked my work because it was strong.” Internally, I know she didn’t like my work at all. I know what fake compliments sound like. They’re always vague and use single syllable words. It’s okay. My writing is not for everyone, and I don’t think she should feel forced to compliment me in order to stay in good standing and feed my ego. I change the subject for her so we can go back to talking about real things.

Even those who are doing well feel the need to go through the motions. The motions of complimenting. Attending events. Buying copies of books we know we’ll never read so certain writers know we support them. Liking and favoriting others’ social media posts. All of it.

I’m putting together a collection of stories. I get two submissions from writers who are more widely published than anyone else in the collection. I struggle.

The anthology, so far, is solid, but almost all of the submissions are from unknown writers. If I included these important people, it could help us all. But the important people’s work doesn’t go along with the other stories, and including it would not be agreeable from an artistic standpoint. It’s not that the work is bad, it’s just not stylistically in line with what it is we’re doing. But I promised these emerging writers I’d do everything I could to get their work out there, and simply having these bylines on the bill would help us get reviews.

This is the level of crudeness people deal with in creative communities where success is not measured in numbers, but instead, in recognition. Writers seldom expect to be compensated in money anymore. We write for the art—and sometimes the only thing you get in return is a larger audience reading your work. I was paying the writers for this book, but the royalties would likely not amount to very much due to printing expenses. Would having a better known person in the index serve as a different sort of reward for them? Would it help push the collection? Or would keeping the book one cohesive vision allow readers to understand it better and get them talking about it, pushing more copies to be sold? I had to wonder.

I hover my mouse over the “send” button before finally making the motion and clicking. It’s done. I have told these widely published writers their submissions will not be accepted for this particular publication. So sorry, and thank you very much for submitting.

I’m nervous, but there is no turning back now. I wrote my emails respectfully, but one of the writers writes back something that shows his dissatisfaction with my selection, questioning my ability to know what’s best for my own publication. I wonder if I have not only failed at aligning the collection with the right people, but if I’ve actually done damage on behalf of the collection, as this person is now considerably upset with me.

I wonder why I am even wondering about all of this. This is creative work, not Wall Street. It’s objective, and that’s exactly why dealing with it socially can be so difficult.

And so we are constantly asking ourselves, which do we choose? Integrity or opportunity? Because when it really comes down to it, opportunity for the underdog and the underdog themselves, is what fuels nepotism.

Nepotism, in any creative field, where value isn’t measurable by quantity, but rather by the feeling work gives you, goes beyond a person in power simply hiring or selecting people they know. It involves aligning yourself with people simply because you know of them and their status can assist in elevating you all. It involves an emperor’s­new­clothes kind of fawning of selected people’s work, based on the fact that they completed their MFA somewhere prestigious, or because they’ve been published already, and let’s face it, that’s what a lot of us are trying to do here. It involves a legitimate fear of saying no to people just because they’re more highly recognized and because everyone’s feelings get hurt so easily since work is personal. It’s the idea that you’re opening doors instead of closing them. It involves those with fewer connections including more connected people in their projects simply for exposure. It results in us seeing the same work over and over again, and nobody can tell if it’s because the work selected is the best work, or if it’s because it’s simply what we know to be good and nobody feels like sifting through every single submission or defying it.

In an industry where recognition, and not always money, is currency, we cannot divorce ourselves from nepotism.

I’m scared as I write this. I’m scared that it may actually be published. That I will be the person who put the words to the thing we all know to be true. I’m scared that this admission will cause a slew of accomplished people to come out against me and say it’s not real, just to prove their success isn’t as a result of nepotism. The truth is that success definitely can come from talent, but that doesn’t mean that nepotism isn’t ever involved. So here I am, stating it.

And here’s why: because even though it’s real, creative nepotism should never take away from you doing what’s right for your work. At first I thought being selective would hurt me, and in many ways, it probably has. I’m sure there have been people who did not book me for readings or review my work simply because I did not do the same for them. There is certainly a “one hand washes the other” unspoken rule in the creative world, because we’re all trying to get booked, be published, get ahead. I think it’s unsaid that many hope by booking or publishing a somewhat-well-known writer for something, that writer will do them a favor when they need it. They’ll make an introduction to an agent, or submit an essay to a popular blog on that person’s behalf.

But getting hung up on aligning ourselves with those who are the most recognizable keeps us from looking at the big picture. I can honestly say only investing myself in things that are 100% right for the work that I’m doing and saying no, not only to friends but to associates, has not only made my work stronger, but it has given my work an even greater integrity. Thus, when I speak to Ronna Lebo about the writing of Boni Joi, she knows I’m really talking about her work, and not just mentioning it to be slick because they are friends. She knows I’m speaking with sincerity, and that the conversation is sincere. That I don’t just say things just to say them. My words are specific. In turn, it allows such women who inspire me to be able to work with me honestly. Our work then becomes better.

So yes, while standing behind my convictions in the past two years has probably gotten me shut out of many things, I’ve been succeeding more and more every year, by getting signed to an agency, having more stories published as well as personal essays.

I am not saying this to brag or show that I’m the best. I’m saying it because I don’t want people to be scared like I was when I first entered the literary world, and feel pressured to do things due to creative nepotism. I want people to understand that real success can also come from staying true to your work and that taking down this social norm is actually what opens doors. You let more people in who may not already be part of the literary scene. You get a different point of view. Your work becomes better, and people start getting what it is you stand for. This is what being honest does. The people you work with creatively are people who make you better. You should always hold yourself to that standard.

But if we were all just a little more honest with ourselves going forward, you’d see something shift in the literary world, and within your own work. You’ll read more zines that don’t all feel the same, or blogs that don’t all have the same buzz-words. You’ll have people pushing your work harder than ever before, because they’ll be people who truly believe in you, and not just people who expect something in return. You’ll hear more voices of under-represented writers being spoken. You’ll find yourself being involved in projects that you feel you can be more than proud of, but amazed that you were included. So while everyone is naturally afraid of change, this change wouldn’t be so bad after all. 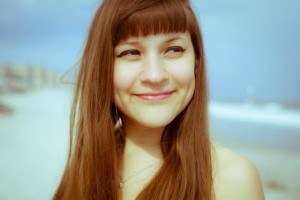 Dallas Athent is a writer and an artist. Her work has been profiled in The L Magazine, Brooklyn Magazine, Bedford+Bowery & more. She is represented by The Rights Factory who is helping her publish her forthcoming novel, “The Queen of Pentacles & The Grail.” She lives in The Bronx with her adopted pets.