Report from the Field: Speaking Into Silences

I was afraid to write this essay. I have never written a personal essay. I write poetry, in which content is delivered through an experience in language, and I write narrative history, in which content is constrained by fact. I also consider myself one of the “lucky” women in the literary world, and in the wider world for that matter. However, I’ve realized this essay, if it’s going to be true, needs to examine my feelings of fear. I’ve allowed—out of natural reserve, perhaps, but also out of fear—others to do the speaking. Those women who’ve suffered more directly, who have “real” stories to tell. I’ve considered it enough to read these stories, to feel them deeply, to discuss their messages with friends on the front porch. I said I would write this essay, which is one reason I’m writing it. But mostly I’ve learned that saying yes to something terrifying usually results in growth.

A male friend of mine persuaded me to take on the local history book I’ve been writing for the past year. For months, I said no: I’m a poet! I could never do that! Finally, precisely because I recognized the right kind of fear in my gut, I said yes. The experience of researching Bayou St. John (a small waterway in the center of New Orleans) has been one of the most rewarding things I’ve ever done. I am immensely grateful to have the kind of friend that would suggest a challenge like this, that would have complete faith that I could, and should, accept that challenge, and bug me until I agreed to take it on.

Before I got started with the project in earnest, my friend and I met up in a coffee shop so he could help me put together the proposal I planned to send off to the publisher. We sat at a small round table among stacks and stacks of books and began drafting an outline. We both got up at one point—to use the bathroom, to order more coffee at the counter—and an older man at a nearby table asked us what we were up to as we were walking by. Now, my friend is nothing if not an eager conversationalist. He would strike up a conversation with anyone, about anything, I’m convinced, and both parties would walk away having learned something. I would not put myself in the same category. I would describe myself as polite, a decent listener, social enough if in the right head-space. A New Englander in New Orleans, in other words. That day, I was not in the mood for talking. I wanted to finish the proposal and send it out—because it was all so new, and I wasn’t yet convinced I could pull this thing off, and if I didn’t send the proposal soon I might say, Omg, never mind! So I answered the man politely, “I’m in the beginning stages of a research project on Bayou St. John,” or something like this, and kept walking. My friend did not keep walking.

The two of them soon began discussing with excitement a famous Southern novelist—a writer my friend absolutely loves (who I’ve never read) and who the older man had written “several books” about (it turns out he was a professor, perhaps retired, at a prestigious local university). Much was said about Famous Male Novelist, my friend speaking with genuine excitement and graciousness, and the older gentleman tossing in references to his papers and books at every turn. By this point, I had sat back down at our table and was trying to get back to work.

Soon enough, somehow, the conversation had migrated from the gentleman’s table to the area surrounding our table. It was wrapping up (finally). My friend brought the conversation back to where it had started and reminded the gentleman that I would be writing a book on Bayou St. John. I stood up as my friend said this, reaching out my hand to make an official introduction. Instead of grasping it normally, the gentlemen took it as one might take the soft, slender fingers of a princess, and squeezed it gently. Did he bring it to his lips, or am I just imagining that retrospectively? I know, I know, that the gentlemen winked at me, and said he would “keep an eye out” for my book when it’s done. His delivery of the word “book,” in reference to mine, placed it in a decidedly different category than his own books, mentioned numerous times over the course of the previous ten minutes. They might as well have been entirely different nouns.

I don’t remember the rest of the meeting. What I remember is getting into my car afterwards, and sobbing. Why was I sobbing? Not because my feelings were hurt, or because I hadn’t been taken seriously as an intellectual in conversation with men (that was nothing new), or because an older, Southern gentleman had clutched my hand like it was 1915 instead of 2015 (also nothing new). No. It was because I was terrified to do something I’d never done before, to be an amateur instead of an expert, to put on a new hat, and that man had exposed my own insecurities to myself. I’d seen them reflected back at me in the gleam of his winking eye.

This interaction reminds me in many ways of one of the last conversations I had before graduating from my MFA program. I was standing around shooting the breeze with three guys, one of whom was graduating with me, and the other two of whom were visiting recent-alums. One of these alums had recently won a major fellowship. The conversation was lovely, as I remember it; we may have been talking about ekphrastic poetry, or some such thing. Just then, a visiting poet—a big wig who we’d all met previously—walked up. Sure, he began dropping the names of some of his baller poetry buddies almost immediately. Sure, one of the stories revealed some personal information about the only female poet being name-dropped, which had the effect of stripping her of her sizable accomplishments and rendering her “merely an emotional woman,” like every other woman, in one foul swoop (at least, this is how I heard it). But what really got me furious was realizing, about five minutes into the conversation, that all of the men in the circle were only looking at each other. For several minutes, although I was laughing along or interjecting (almost to test it, at that point) no one was looking at me. It was as if every instance of successful eye contact resulted in a laser beam zapping across the circle, but I was the recipient of none of the heat, none of the light. After a few more minutes of this, I backed out of the circle and walked on, and I would have been surprised if any of them noticed.

Now, I love and respect the male peers I had been talking with that night, and I respect the work of that visiting poet immensely. I do not tell this story to single them out, although sometimes it’s important to single out. Sometimes it’s more important, however, not to place blame but to instead reclaim, to shift from absence to presence.

How does a woman reclaim her intelligence, her importance, her existence, after it’s been erased from a conversation? Although entirely different in magnitude, this kind of erasure is on the same spectrum as that of sexual violence. If women were seen and heard every day, in every interaction—as humans, not as sexual objects—then violence against women could not exist. We cannot separate these small moments, in which the patriarchy we’ve all absorbed into our subconscious minds flickers to the surface—in the form of a wink, or other subtle conversational power-plays—from more extreme manifestations of misogyny. Nor can we ignore the racially-motivated microaggressions we all experience everyday, either as perpetrator or as victim, at the grocery store or while walking down the street. These subtle emanations belie the beast we all harbor within; it’s not personal, it’s systematic. And if we—we perpetrators, we victims—ignore the small stuff, we can’t be surprised when a Brock Turner shows up in the news.

My fear around writing this essay, therefore, was really a fear of pushing against these small erasures. Of speaking into small silences, precisely because they’re small, and infinitely common, and perhaps a bit embarrassing. And yet fear is one of the most instructive emotions: it signals the importance of the thing it surrounds. Even if I can’t get those lost conversations back, even if I can’t retroactively retract my hand from Mr. Professor’s slack grip, I can write a place for myself in this larger conversation, alongside women with other stories, of all sizes and shapes, to tell. Together we’ll write into the void. Together we’ll delineate the beast. 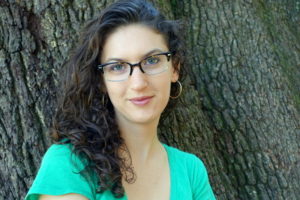 CASSIE PRUYN is a New Orleans-based poet born and raised in Portland, Maine. Her poems have appeared in AGNI Online, The Normal School, The Los Angeles Review, The Adroit Journal, Poet Lore, and others. She is currently writing a book-length narrative history of New Orleans’ Bayou St. John. Her manuscript Lena, winner of the 2017 Walt McDonald First-Book Prize in Poetry, will be published through Texas Tech University Press in the spring.