“In the past, death was often a source of suffering.” “The poem is universal because it involves a birth and all readers have experienced being born.”

Those are fictional examples, but anyone who grades papers will recognize the awkward effort to please a poorly imagined reader. Paralyzed by fear of being wrong, smart students at times produce absurd, robotic-sounding statements. Their teachers, convinced we’ve failed, laugh so that we won’t cry.

That’s why, when teaching literature, I sometimes encourage writing non-analytically. My specialty is poetry writing, so it’s partially an invitation to creative writing. In my intro-level “Literature and Food,” students can write, in lieu of one critical paper, a personal essay that aspires to a distinctive voice and narrative arc, in the tradition of Laurie Colwin or M.F.K. Fisher.

Most take this option. Stiffness vanishes; personality emerges. No longer afraid of being wrong, students do what good writers have always done, muck around in gray areas. The best question themselves: disdaining their parents’ taste; going abroad fearing the food; going next door fearing the food. These pieces sometimes make me want to cry, too, but for the right reasons. They tell engaging stories that examine the pain and contradictions of everyday life.

Yet writing creatively also hazards being wrong, possibly more egregiously. Writers can be humanly, versus analytically, wrong. My most ambitious students risk sounding judgmental of less sophisticated eaters (classist), ungrateful to their parents (privileged), or like American tourists sampling “the curry” (racist, imperialist). In workshop sessions, which help the writer discover whether the intent of the piece has been realized, the class critiques everything, so it’s not just between the author and me: the author’s reputation is at stake.

They leap anyway. Even in dangerous territory, before they have command of form, my students are capable of being inquiring, genuine, and self-aware, because they rarely use constructions that fail to consider a wide range of possible readers. Having grown up hearing national discussion of gay marriage, racial injustice, unequal pay, transgender rights, weight discrimination, access for people with disabilities, treatment of undocumented immigrants, and religious intolerance, they navigate the possibility that their readers may include people in the affected groups with relative ease.

Sure, they trip up, as do I. (Growing older while they do not, I rely to a degree on conversation with them to keep me fluent in our constantly renewing language.) And our campus climate, like most colleges’, still needs work; outside class, some still say terrible things.

Inclusivity efforts can also backfire. After the student protest at Oberlin College over cultural appropriation of foods, I briefly froze while planning a visiting-writer dinner. Our campus dining services, whose catering menu offers mainly American dishes of European origin, had always been helpful. To branch out, I could ask them to go off-menu and cook something non-Western. But if it didn’t go as imagined, would people take offense? I didn’t dare.

This month, when I saw Calvin Trillin’s New Yorker poem, “Have They Run Out of Provinces Yet?”, I wanted it to be harmless.

I tried to read its “we” (food-obsessed Americans being mocked) and “they” (bringers of Chinese food to the U.S. over decades) as ironic, and to take its goofiness as a sign that the wink was coming. But after multiple readings, “they” remained foreign up to the present. At no point does the “we” allow for Chinese ancestry, although Chinese immigrants obviously run the restaurants all along. They and their descendants never become American.

No big deal, I told myself. You’re just rattled because you happen to be a Chinese-American poet who’s into food and has a food-literature pantheon that includes Trillin; you happen to be working on a book of poems about U.S. Chinese food over the last half-century, and incidentally just submitted some of those poems, in an fit of wild hope, to The New Yorker. You’re the one person this poem wasn’t meant for. It’s unlucky, not malicious. If The New Yorker cared enough to aim this poem specifically at you, you’d have a much lighter teaching load.

But I couldn’t sleep. The problem went beyond me, beyond Chinese Americans. The progress of language was being undone. Racially exclusive usage was thriving, not just in Trump brochures, but in our most prominent literary platform. Seeing the Asian American Writers’ Workshop’s call for responses, I wrote a poem that gives my take on what Trillin calls the “Simple days of chow mein and no stress.” It arrived in a few fevered hours, quickly announcing itself as a villanelle, a form I learned not from Li Bai or my namesake Su Dongpo, but from Dylan Thomas and Elizabeth Bishop.

The outcry that greeted Trillin’s poem affirmed that I was not the only person troubled by it. I first heard it from Asian Americans, but also from whites and other people of color.

Then came the backlash, mostly but not exclusively from whites, and disappointingly, from some white liberals: People of color need to “lighten up.” So now a white person can’t write about Chinese food? Give me a break.

It wasn’t the first time members of the dominant group were telling a marginalized group how to feel. But I had underestimated the degree to which our nation is divided. I was hearing dismissive contempt from people I thought would have my back, even professors and poets, who know “it’s just a poem” won’t hold up.

Their frustration, I gather, comes from feeling oppressed by the increasing number of ways they could get into trouble. Speech keeps getting more fraught with the fear of being humanly wrong.

Anyone can write about Chinese food. It’s a matter of usage, and usage is more complex than it was a generation ago. Because our population is always changing, because we keep acknowledging more groups that were always there, American writers must continually re-imagine our audience. Our youngest writers know the new rules best.

There’s always conflict as language adapts. I only wish the discussion, like the discussion of who should lead the nation, were not so hatefully splintering us. Contempt is born of fear, and fear makes us say ridiculous things. 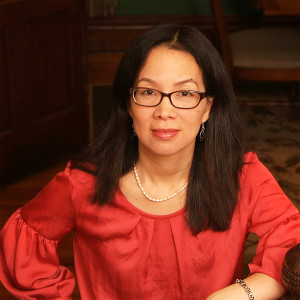 ADRIENNE SU is a poet-in-residence at Dickinson College. Recipient of an NEA fellowship, she is the author of four books of poems, the most recent of which is Living Quarters (Manic D Press, 2015). Her work has appeared in journals including Cincinnati Review, New Ohio Review, Terminus, The New Republic, and the Academy of American Poets’ Poem-a-Day series, and is forthcoming in Best American Poetry 2016.