Report from the Field: Moving through the Webs

My ex-husband used to keep an unframed photo of me on his desk. The photo, bent against a brass lamp, shows me hunched in his grey hooded sweatshirt writing in a journal at Charles Dickens’s London home, or maybe it was Thomas Carlyle’s, I can’t remember. What I can remember is feeling engulfed in my solitude, connected through my imagination with the ghost of a long-dead man by persisting alone among the living. That’s how I existed as a writer then: surrounded by the obscured support of living and dead men but ultimately engulfed in my own solitude, ultimately isolated, ultimately hunched alone over a page of private words.

Years later, my sister Emily and I drank too much beer in Brooklyn. After playing a round of pool with strangers and firing fake rifles at computer-generated bucks in some coin-operated video game, we linked arms and commiserated about the difficulty we both were having generating new work. We decided we’d use the month of June to prompt each other daily and by the end of each day she would craft a poem and I would craft a short play. We named our scheme “Project MAE” (“Maria and Emily”) and so launched what I thought was my first real partnership as a writer.

Every morning that June, Emily or I would e-mail each other our prompts. Every afternoon, I’d sit with that prompt until an idea formed, or I’d start typing before I had an idea, or the idea would come immediately. Sometimes I imagined Emily struggling similarly and felt comforted, even excited—not only by the work we were generating, but also by the connection between the two of us this work had begun to forge. One morning, Emily forgot to send her prompt, so I wrote a play I called “Play Without a Prompt,” a concept piece that confronts our country’s escalating post-911 fear with a diverse array of characters who open themselves to each other and eventually trust each other. On some level, this was what I was learning to do: trust another writer.

But I didn’t know what to do next. I didn’t know what to do when June ended, how to take this fledgling partnership with my sister and turn it into a new way of thinking about myself as a writer. Years earlier, I had asked my husband for some feedback on a poem, and he had returned the poem with so many corrections I barely could see my original words. He later revealed he had felt threatened by my work and needed to prove to himself he also had something to offer. I suppose at the end of June I still didn’t know how to move beyond those corrections, or even beyond that earlier image of myself shrouded in his hooded sweatshirt, silently rejecting his version of partnership at the end of June but nonetheless convincing myself that nothing needed to change. 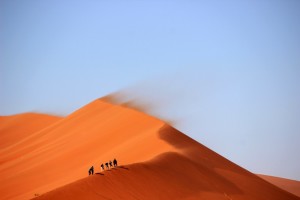 Then, at a late-summer party, I found myself with two friends, Pam and Angelique. We left the party to buy a pack of cigarettes and confessed our closet writing to each other. We fantasized about forming a writers group, then began forming goals, then set a date. Those early meetings saw me sharing the thirty plays I had written with Emily, and Angelique sharing small paragraphs about a recent trip to Southeast Asia, and Pam sharing old journal entries about her childhood. We invited our friend Elizabeth to join us and she brought her poems. We planned our first writers retreat in the Finger Lakes and tried our first joint prompt: “straw mat.” We set the kitchen timer for ten minutes and wrote four pieces that included the words “straw mat.” Months later we named ourselves the Straw Mat Writers.

During those months, I learned about Pam’s history with her family’s Dairy Queen and her epileptic sister; I learned about Angelique’s time in foster care, her parents’ romance at the psych ward, her mother’s battle with schizophrenia, and her father’s alcoholism on the reservation; I learned about Elizabeth’s movement from one military base to another and her experiences with misogyny and rape; I learned about my own struggles with the men in my life and the extent of my desire for something as simple as happiness. Soon Pam was completing poetry and nonfiction; Angelique was completing travel narratives and memoirs; Elizabeth was completing poems and the occasional essay or story; I was completing plays and fiction. Rather than correct each other, we learned about each other; we asked each other questions; we challenged each other; and we grew. When Angelique spent a summer writing in Paris, we skyped and decided to co-author our first piece, a play for the upcoming First Niagara Fringe Festival in Rochester. We called this piece FourPlay, and we watched as it became a powerful exploration into female friendship and the literary/cultural history of gendered oppression against all people in this country. Our central prop was a straw mat woven on stage by an older woman who collected small pieces of the various characters’ lives to put into her tapestry. That was the play: a meditation on the various pieces of ourselves we leave behind as our stories become part of the larger social fabric. We sold out both nights of our performance run.

And a funny thing happened. During this burgeoning of Straw Mat Writers, this foray into sustained female collaboration, I realized that on some level I had been collaborating for a while with the women in my life. I certainly had been collaborating with Emily insofar as the thirty plays I had drafted that faraway June had morphed into my New York Plays, produced by Out of Pocket Productions and recently published by Heartland Plays; I had collaborated with an old friend Melissa, a new friend Robin, and my mother-in-law Louise on a novella I began at the end of the twentieth century and then revised beyond recognition until it won the Grassic Short Novel Prize and was accepted for publication by Evening Street Press; and most significant I remembered an even older friend, a different Pam, Pam Mills.

I met Pam Mills in the 1990s in Boston. Now, I remember Pam talking one night in Boston about how thin are the webs that separate us from people across time and place, and how miracles happen when we learn to move through those webs. I remember her sharing with me the manuscript of her attempt to return to her home in South Africa. I remember when I moved to Rochester and she called me to tell me her cancer had returned, that this was it. I remember visiting her on her deathbed and her asking me to take charge of her manuscript, and the years I spent working to craft that manuscript’s introduction from the journal she had left in my care and trying to find that manuscript a home. I remember finding Debra DiBlasi from Jaded Ibis Productions and Debra’s excitement at finding Pam’s manuscript, and when Debra told me she wanted to publish Pam’s manuscript, and when I told Pam’s sister Carol, and when I cried after re-reading the manuscript and thinking that in some real way I had crossed one of those webs, that I had collaborated with Pam, too, though she was dead, that through our friendship her words would come alive and live (perhaps) beyond both of us. I remember realizing that this friendship between women brought both of us out of our isolated space and into a new space where our words touched each other and through that touching could enter the world at large.

Maybe I have found a new way of thinking about writing and about community, at large, and I wonder now how many other women still hunger for something similar, for some new way also of thinking about their writings and their communities. I wonder how important it is that fifteen years after our trip to London, my husband left me, taking with him that photo of me in his gray hooded sweatshirt. I e-mailed him recently to ask him if he remembered where I was in the photo and he e-mailed me back, “I believe you sat at Dickens’s desk in his study. It’s always been one of my favorite pictures.” I realize now that I no longer need to be contained by the edges of one of his favorite pictures or even by the lingering, ambiguous shadows of Dickens’s desk. Both are gone. What remains is this community of women—dead and living—who write with me. I no longer am hunched alone over my words. I share my words with the women in my life and, through that sharing, I’ve learned to share myself with these women and my words with the rest of the world. 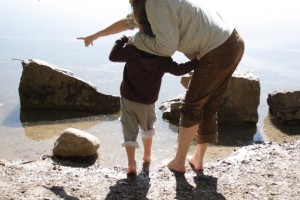 MARIA BRANDT teaches English and Creative Writing at Monroe Community College in Rochester, NY, where she lives with her son William. Her plays have been finalists in NYC, Boston, Buffalo, DC, Reno, and London; read in Los Angeles, Valdez, Fort Lauderdale, and Rochester; performed in Boston, NYC, and Rochester; and published by InDigest, Shark Reef, and Chamber Four. Maria also has published short fiction with Rock & Sling, Arts & Letters, upstreet, The Journal of Compressed Creative Arts, and The Lindenwood Review. Her novella All the Words won the 2014 Grassic Short Novel Prize and will be published by Evening Street Press in 2015, and her collectionNY Plays was published by Heartland Plays, also in 2015. Maria currently is editing her friend Pam Mills’ forthcoming posthumous memoir Kamastone with Jaded Ibis Press, and she is a founding member of Straw Mat Writers, with whom she co-authored FourPlay for the 2014 and Shitty Lives for the 2015 First Niagara Rochester Fringe Festival.