Report from the Field: Financial Confessions of a Feminist Organizer

In July I went to a feminist icon costume party to celebrate the first birthday of Out of the Binders, the literary non-
profit I cofounded in 2014. I wore a thrifted purple dress, a gold pen necklace, a bright red cosplay wig, and some serious shapewear: I was Joan from Mad Men. One of our org’s volunteers told me she had done an interview with one of the show’s writers who told her that Joan isn’t a feminist—she just wanted her money. 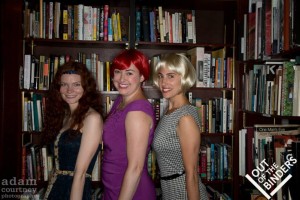 As if the two are mutually exclusive?

Here’s my problem: I need to be making more money, and yet the work I care most passionately about and want to spend my time doing is so often labor I do for free. Even worse, when I do make money for the work that I love I feel guilty for taking it, as if earning money for my labor makes the work I do less important, or artistic. The irony is that the non-profit I co-direct dedicates itself to the career advancement of women and gender non-conforming writers (like me), and by “career advancement,” we so often mean: get paid better.

A year ago, Out of the Binders had a Kickstarter in order to raise the money for our first conference (BinderCon). We exceeded our goal of $40,000 by 38%, raising a total of $55,393. By the time the campaign ended, I had been working on the conference for two months, seven days a week, occasionally 12 hours a day.

On the night in early September when the Kickstarter campaign ended, I opened a bottle of white wine and posted a selfie on Instagram “toasting” everyone who’d helped us get there. Then I went on Facebook. A woman I didn’t know was demanding to know how the money would be allocated since she’d spoken with a volunteer who said they weren’t being paid. (I myself was a volunteer who wasn’t being paid.) A couple other women backed her up to demand we release our budget immediately to the public (though I could find no other writing conferences that did this), with the insidious implication that I was mismanaging the funds. It was a tear down and it felt like getting a slap in the face in front of a roomful of my peers. Beyond the selfie, I never got a chance to celebrate our fundraiser’s success.

The next day, I sent a message to all of our Kickstarter backers, itemizing our $72,000 conference budget.

In October, after a successful conference organized by volunteers in three months that brought together over 500 women from around the world, the Board of Directors approved honoraria for myself and my co-director of $2,500 each.

Every time I write or talk about money it feels like a confession. I need the absolution of my listener, a pat on the head, the words “it’s okay.” I don’t need you to tell me how good I am at running a non-profit or organizing a conference. I know how good I am. But I need you to tell me that I deserve to be paid for my work because there’s a pernicious voice in my head, replaying that Facebook thread, telling me that I do not.

The number one reason I’ve been able to devote so much of my time over the last year to the projects I’m passionate about is because my partner pays our rent. We joke that he’s my patron. (I also joked that for the feminist icon costume party, he should dress up as me.) Every night I lie in bed calculating and re-calculating the income I’m expecting over the next few months—payment for an essay I’ve been commissioned to write, a portion of a book advance, another conference organizing stipend—estimating when I’ll be able to make a dent in the credit card debt I’ve accumulated since quitting my three part-time jobs to finish my third book and organize conferences. Soon I’ll be able to help with the rent again and that’s important to me because I want to feel like an equitable partner. I want him to know that the year he’s spent supporting me has paid off, that I’m now finally making money doing what I love to do.

Although I’ve been consistently employed since I was a teenager, my income no longer comes from answering phones in a call center or teaching pliés to preschoolers or checking coats in the basement of a night club until four in the morning—just a sampling of the odd jobs I’ve had in order to have the time to write.

This year, for the first time ever, most of my income is coming from writing and managing and organizing. Well-meaning family members ask when I’m going to get a job, having as hard a time as I am wrapping their heads around what it is I “do” for a living. Defining myself as a babysitter or a waitress was always easier than claiming an identity as a writer.

At BinderCon LA last March, one of the keynote speakers was Katie Orenstein, founder of the OpEd Project. She led a thought experiment on expertise in which a roomful of women became very uncomfortable asserting what they were experts in. One of the most common responses: “But how can I claim to be an expert, when so many people know so much more than me?”

You can watch a short clip from Katie’s presentation, “Radical Impact,” in which she argues that women need to shift from a fear of self (fear of not knowing enough, fear that people will think you’re bragging) to “a position of social responsibility,” and a focus on how your work will impact others.

I’m trying to apply this lesson to my conflicted feelings about earning money for the work I’m most passionate about. Is the memoir I’ve worked on for three-and-a-half years about the sudden death of an abusive ex-boyfriend going to help other young women in and out of complicated relationships? I believe so. Is our next BinderCon going to empower hundreds of women and gender non-conforming writers in their careers? I know so.

Clearly I did not set out to write books or launch a non-profit to make a boatload of money. But at this point in my career I must be a Joan. I must look out for myself and my financial interests, so that I can afford to continue to do the feminist work that is my social responsibility. 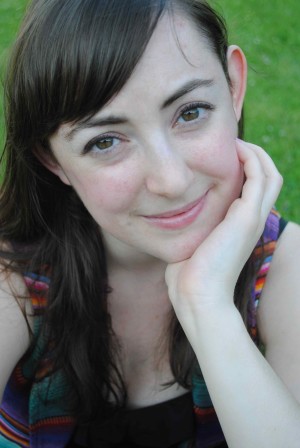 LEIGH STEIN is the author of the novel The Fallback Plan, a collection of poetry called Dispatch from the Future, and a memoir forthcoming from Blue Rider Press in 2016 called Land of Enchantment. She co-directs the literary nonprofit Out of the Binders. Follow her @rhymeswithbee