Report from the Field: Behind the Scenes at AWP with members of The Disabled & Deaf Uprising

You are here: Home / Archives / Reports from the Field / Report from the Field: Behind the Scenes at AWP with members of The Disabled & Deaf Uprising

This Report from the Field is a post by a collective of anonymous writers regarding the developing controversy concerning noted literary convention AWP.

We are the Disabled and Deaf Uprising, an anonymous collective of writers. We have all kinds of disabilities. We sign. We speech read.

This past weekend we joined over 12,000 writers, editors and publishers in Tampa, Florida for the Association of Writers and Writing Programs (AWP) annual conference. This is the largest conference for creative writing in North America. Amazon, the National Endowment for the Arts and the Poetry Foundation are major sponsors. Writers go to see and be seen; to schmooze and network; to give readings and present on panels. A writer’s presentation might become a book and a book might become another book or a job or a movie.

So we flew across the country. We survived the TSA pat-downs and strip-searches. We hoped TSA would not seize our prescription medicines and the airlines would not break our wheelchairs. By the time we landed, we already had a frantic email. One of us could not walk from the convention center to the hotel. Where was the shuttle?

Last year’s conference went like this: “The electronic doors don’t work and the accessibility desk is not accessible,” wrote Jess Silfa.

“Disabled friends are telling me they’re hiding in their hotels,” wrote Karrie Higgins.

Some of us gave up that year. “I won’t ever go again,” wrote Stephen Kuusisto.

Where was the shuttle? One of us wanted to find her editor at the book fair, but instead looked for the shuttle. We called the accessibility hotline. There was no shuttle. They assumed everyone could walk from the convention center to the conference hotel. Or we could purchase a ride from a third-party company. It would cost $8 to go less than half a mile. On the phone, we said, “Are you sure about that? Is that accurate? I want to make sure that’s accurate before I tell the others.”

Some of us would be in chronic pain and need a way back to the hotel several times a day. $8 each way would add an extra expense for being disabled.

We did not want to tell the others. Last year, in the hotel bar of the Marriott Marquis Washington, one of us said to another, “Don’t worry. It will get better.”

We do not understand why there are so many books and movies about disabled people and yet so few of them are written by disabled people. Who would prefer the story of immigrants written by their US-born, next door neighbors? Who is still celebrating white writer John Howard Griffin’s Black Like Me (“the 5,000,000 copy bestseller!”)?

Come closer to us. We want you to know us while we’re alive, while we’re finding the shuttle, accessible doors, escalators, elevators, supplementary materials and walking around the book fair. We approached various booths and asked, “What books do you publish by disabled writers?”

“Zero, sorry about that,” said the rep from Milkweed Editions.

“We have some forthcoming, but we don’t know what they are,” said the rep from Red Hen Press.

“We publish 150 pieces per year and none of them are about or by disabled writers,” said the rep from BookForum. “It’s not something we include in reviews.”

“Our press has three books by disabled writers. And here they are,” said the rep from Copper Canyon. We bought them because what else could we do?

Last summer, on a conference call with AWP, one of us asked why there were never any disabled writers on the main stage.

The AWP rep said, “There just hasn’t been a disability moment yet.”

What counts as a moment? What about the moment when Harriet Tubman said, “I was free, and they should be free”? Or what about Sarah Bernhardt’s moment on the silver screen? What about the nationwide 504 Sit-in, which included the longest sit-in at a federal building ever? What about when disabled people crawled their way up the eighty-three stone steps of the U.S. Capitol Building, shocking Congress into passing the ADA? What about the disabled people who were dragged out of the Capitol rotunda while preserving all of our healthcare last summer? Do any of those count?

In Tampa, at the townhall on accessibility, the same rep said, “The Americans with Disabilities Act (ADA) was largely made by able-bodied people. So Mike Astrue, who is on the AWP general board, was one of 20 people who actually wrote the policy for ADA.” Mike Astrue, who wrote The Secret Language of Women under the name A.M. Juster, is nondisabled.

Some of us gasped. Some of us laughed. We laughed because AWP, in the midst of violating basic ADA provisions, also took false credit for creating the ADA. One of us left the room at that point. No wonder some disabled writers had given up.

We kept trying. Karrie was supposed to be on two panels, but the airlines would have made it difficult. Could she Skype in?

The email from AWP discouraged it: “[attendees] feel more involved when it’s a person-to-person interaction without the layer of technology between them.”

This stung. Karrie didn’t come to Tampa, and she didn’t Skype in.

Do the conference organizers, who are also writers, not know that some of us depend on layers of technology in daily life? We use technology to breathe, to hear and to speak.

“Tell them in 2014, Edward Snowden ‘Skyped’ into a presentation at SxSW interactive. It was jam-packed and no one seemed to mind. Skype isn’t the problem,” wrote Marissa Goldsmith on Twitter.

“When people start talking about it on social, it drives me crazy because I don’t have any control of it and it makes AWP look bad,” the AWP rep had said at the townhall on accessibility.

We kept talking about it on social media. We spoke and signed at the Disabled & D/deaf Writers’ Caucus. Jess Silfa live-streamed the caucus even though AWP discouraged them from doing so. Jess relayed questions and comments from viewers to the caucus members. Meghan Callahan captioned it from afar. We spoke and signed about the stairs, all the stairs, and the cords that snaked the floor of the book fair, and tripped us. Our wheelchairs could not roll over them. We spoke and signed about how the convention center only had two elevators and they were far from the entrance. The escalators, to the second floor, the book fair level, only went up.

We realize we are not the first disabled and Deaf writers to attempt change. We’ve been reading the Harriet Tubman Collective, the Disability Visibility Project, #CripLit, and anthologies like Toward Solomon’s Mountain: The Experience of Disability in Poetry (1986); With Wings: An Anthology of Literature by and about Women with Disabilities (1993); Staring Back: The Disability Experience from the Inside Out (1997); Deaf American Poetry: An Anthology (2009); Beauty Is a Verb: The New Poetry of Disability (2011); Criptiques (2014); QDA: A Queer Disability Anthology (2015); Stairs and Whispers: D/deaf and Disabled Poets Write Back (2017) and Tripping the Tale Fantastic: Weird Fiction by Deaf and Hard of Hearing Writers (2017). We read Disability Studies Quarterly and Wordgathering. We know about Deaf President Now.

It was the last day of the conference. One of us drove the loop from the conference hotel to the convention center’s accessible entrance, picking disabled kin up on the way. One of us finally touched base with her editor. One of us cried on the phone to a disability rights activist in Los Angeles. One of us questioned her interpreters again in disbelief: Are you sure he said that ableist thing? One of us only wanted to go outside, by the bay, but all the doors had signs that read, “NOT AN ACCESSIBLE EXIT.” So she sat down inside at a table.

Some nondisabled friends walked up. “Hey!” they said, “Are you having a good time?” 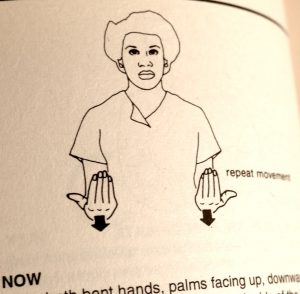 The Disabled and Deaf Uprising is an anonymous collective of writers and artists. If your work or participation has been affected by ableism or civil rights violations, we will do the call out for you: direct message us on Twitter @DisDeafUprising or email us at disdeafuprising@zoho.com. This is our first publication.