Mary Shelley is such a well-known cultural figure, it’s easy to forget she was ever a real person. Her best-known work, the novel Frankenstein, or The Modern Prometheus, has never been out of print and continues to be studied by academics, high school students, and fans of science fiction and horror. Her characters, Dr. Victor Frankenstein and the Monster, almost immediately became part of the pop culture canon. Somewhere in the last two centuries, Mary herself has been eclipsed by her novel, as she had been eclipsed by her husband’s literary success. It is only now, two hundred years after she began writing this book, with the first biopic based on her story poised to debut, that the woman herself is beginning to gain attention.

When Frankenstein was first published in 1818, Mary elected to remain anonymous. The only clues to the author’s identity were its dedication to Mary’s father, William Godwin, and a preface written by her husband, Percy Bysshe Shelley, whose involvement caused many readers to presume him to be the anonymous author. Even after Mary’s name was credited in the 1822 second publication, many still presumed this was merely a gesture, that Percy had written or co-written his wife’s work. And for the time, this reaction could have been expected—many of the 19th century’s most beloved authors had to publish under male pseudonyms, in order for their work to be taken seriously. Two hundred years later, many female authors in the genres Mary herself pioneered in Frankenstein—horror and science fiction—continue this trend, masking their gender through male pseudonyms or gender-neutral initials, for largely the same reason: so as not to repel male readers and critics. Fair or not, the assumption has long held that women will read books by and about men, while men prefer to read exclusively works by or about their own gender.

Frankenstein includes very few female characters, by design. The women in the novel are not central characters. The more complex points of view held in the novel are shared amongs the main characters, three men (one of whom is a monster, technically). In Frankenstein, the science of reanimating corpses is real.  Reanimation of dead flesh was a widely discussed topic during Mary Shelley’s lifetime.  Many ambitious men attempted the process . It stretched credulity to read about reanimation actually working, but as women were not given much space in the sciences, allowing women the agency and the ability to become involved with the process, even in fiction, may have been too scandalous for Shelley’s the readership of England in 1818 to accept even in fiction.

While Mary Shelley’s work is less biographical when compared to the work of Jane Austen or the Brontë sisters, the gothic underpinnings of her life translate directly into her work, exemplified by  the gloomy world she created in Frankenstein. Teenage Mary would meet her married lover for assignations in the same graveyard in which her mother was buried, and allegedly lost her virginity to him in this same location. The pair eventually left England, and Shelley’s wife and children, for a new life in continental Europe. In fairly short order, they found themselves penniless and forced back home. Mary’s father refused to accept them, so they moved in with her stepsister, Claire Claremont, who would also become one of Percy Shelley’s lovers. Shortly after Shelley’s wife, Harriet, gave birth to a child in 1816, Mary went into premature labour with her first child, who died days later. Her second child, William, whom the doomed child in Frankenstein is named for, and would also die in infancy.

The novel’s titular doctor is so terrified of the power of women he strives to find a way to procreate in the absence of them altogether. When the monster asks Frankenstein to create a wife for him, the doctor ultimately refuses–fearing that the female monster would either refuse her assigned mate, or that she would go on to reproduce with him—taking the power of life and death from Frankenstein, giving it  back, symbolically, to women. Science fiction was invented by a woman because only women could have conceptualized such shifts in the balance of power; men have held the balance of power in so many societies, what need would they have to imagine another world?

It’s also worth noting that Mary witnessed doctors attempting to revive her half-sister Fanny using electricity, following a drug overdose—methods similar to those Mary invented for the creation of Frankenstein’s Monster.

Mary’s anonymously published novel was almost an instant success. Her timely commentary on science and life and death found an audience who craved this sort of tale. Its popularity expanded when two theatrical adaptations were created, without her involvement, in 1823 and 1826, bringing her story to audiences who may not have been in the habit of reading novels. 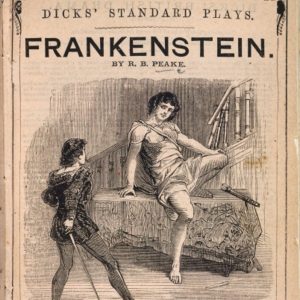 Mary went on to publish four more novels, as well as numerous short stories and to compile collections of Shelley’s work following his death  in 1824. However, none of her other work caught as much attention as her debut. Even now, with interest in Mary’s oeuvre perhaps greater than ever before, Frankenstein seems to exist on some other plane; a work that, like its monstrous narrator, has become more powerful and memorable than its creator. Mary’s contemporaries, Jane Austen and the Brontë sisters, continue to have their lives celebrated through fictionalizations and biopics, while Mary’s life story has remained less examined. Perhaps this is partly because of the ease with which Austen and the Brontës may be conflated with their heroines, due to shared life experiences and perceived personality commonalities. Mary’s characters are no less autobiographical… but are always men; the similarities to her own life more emotional and less obvious. In an age when the biographies of our favourite authors are one Google search away, it feels noteworthy that Mary’s story continues to be underrepresented. Perhaps the new film, directed by Haifaa al-Mansour and starring Elle Fanning, will help to bring her story to more prominence.

Shelley’s lesser-known sophomore work, The Last Man, pioneered the sub-genre of post-apocalyptic fiction. Written after her husband’s death, and after his wealthy family forbid her from writing anything explicitly autobiographical about him, this work includes allegories of herself, Shelley, and Byron. Mary’s stand-in is the novel’s first-person protagonist, Lionel, the last survivor of a global pandemic—and, of note, a man. Set at the tail end of the 21st century, the work explains with startling accuracy — prior to the discovery of germs and vaccines — how a disease may spread quickly around the world, decimating the population. As in the best works of this genre, the personal stakes are played out against catastrophic consequences—Lionel’s grief and ennui following the loss of his friends and family are given extra weight as he must survive alone, forever. It may not be an autobiography, but Mary’s emotional state clearly effected both the topic of her work and her approach to this story of life and death.

While generations of talented female science fiction authors followed in Mary’s path, the genre itself remains a boy’s club. There has never been a lack of female authors in the genre, but mentorship, promotion, and recognition continues to be given to male writers. A quick scan of the shelves in any bookstore or library’s speculative section will show more male authors than female, and when women’s voices are there, they tend to be the same handful of well-known writers–emerging and mid-range female voices are less represented in mainstream shelves. This lack of women’s voices extends into all levels of publishing, production, and reviewing, leading to a lack of top-down support and mentorship for new voices and promotion for mid-range authors. The same is true in the horror and post-apocalyptic genres, as it is in so many literary genres. Mary Shelley published the first science fiction novel anonymously, and women have been trying to make a name for themselves ever since. In 2015 and 2016, the Hugo awards were affected by a social media campaign intent on sabotaging the chances of female authors. This campaign was motivated by the desire to protect the boy’s club that speculative fiction was for so long by removing the voices they saw as interlopers. What sweet irony, then, that the winners in both 2016 and 2017 were mostly female, including back-to-back Best Novel awards going to N.K. Jemisin for her science fantasy works.

Interestingly, the largest quotient of substantive female characters in science fiction is currently in the YA market—books aimed at readers  around the age Mary herself was when she pioneered the genre. The Hunger Games, Divergent, and their many contemporaries present active, engaging, flawed heroines fighting against, usually, some sort of patriarchy. For Mary Shelley, writing a novel at all was an act of resistance; using her full name as author on the 1822 reprint was an even bolder choice. Today’s science fiction authors and readers owe it to her to continue advocating for more female voices both behind the scenes and in the works themselves. Outside of YA, female characters in science fiction often still appear only as preternaturally sexy love interests who need saving, fridged devices to motivate the male heroes, or femme fatales who exist to betray the male heroes. These roles can be, and sometimes are, finessed into something more, but are problematic and alienating if they are the only offered representatives of their gender. Mary Shelley wrote primarily male characters in order to appeal to the largest readership at the time—educated men. Today’s audiences represent all genders, most of whom are happy to read books by a variety of authors; yet publishing continues to elevate male voices above female, creating a self-fulfilling cycle that continues to suppress women’s voices.

Perhaps the impending Mary Shelley biopic will allow at least the pioneer of these genres to be recognized for her contributions, as a celebrity author on par with Austen and the Brontës, her life remembered with an equal reverence to her work, and for women to be allowed credibility in genres pioneered by a woman. For certain, the time is right; not only is it 200 years since Mary began working on Frankenstein, but the genres she birthed are enjoying perhaps its most widespread popularity. With the advent of WattPad, and other services, allowing writers of all ages to share their stories, perhaps Mary’s pioneering work can lend itself as inspiration to a new generation of teenage girls ready to terrify and rock the world.

ANN FOSTER is a writer and historian based in Saskatoon, SK. She writes about pop culture and history at annfosterwriter.com.