It has to be from here,
forgotten but unshaken,
among comrades of silence
deep into Welfare Island
my farewell to the world.

In the last year of her life, Julia de Burgos bid farewell to the world from within Welfare Island. There she had given her body over to a series of treatments conducted by doctors who saw her as another brown body they could use for experimentation. The stakes of staying or leaving the hospital were different for her than for the cosmopolitan poetic subjects I have been force-fed since I could read. Her “choice” to be hospitalized was undoubtedly the product of the fact that she had difficulties securing employment despite having many of the same skills as white candidates. To her doctors, she was just another Puerto Rican, whose otherness made her the perfect object of study. They did not know and did not care if Pablo Neruda had thought her work was exceptional, or that she was considered one of the best Puerto Rican poets of her generation. Her (dis)placement and her survival were contingent upon the whim of those well-traveled, well-moneyed U.S. citizens that belong to no single place only because they owned everyplace. Her doctors belonged to the same class as William Carlos Williams, who despite having a Puerto Rican mother, in all probability would not have thought twice about experimenting on an unknown brown person.

I have spent the last three and a half years thinking about what it means to be a cosmopolitan poet in this country that can never be mine. I’ve watched poets like Kenneth Goldsmith talk about lives, languages and experiences as if they were an unending source of fascination. I’ve thought about what kind of privilege their freedom of movement entails. I’ve come to understand that this cosmopolitanism is the default setting for a neoliberal, travelogue poetics that always positions itself in the center and celebrates the death of subjectivity at the expense of lives like Julia’s. This poetics declares the death of the lyric, the death of history, and the death of the self in one grand gesture, making room for cruelty, but not the anger that follows in its wake.

When these poets travel to Puerto Rico, it reads like Rum Diaries: Archeologists Take a Week Off from their Museum Tours. The contained microcosm of Boricua otherness is always available to the cruise-ship of the U.S. Avant-Garde. If it appears at all, it appears in the form of a Fantasy Island theme park. They get off the ship for a day, collect their souvenirs, and move on. Old San Juan is a favorite memory. A towel with a naked woman. A dress no one outside VSJ would wear. A keychain with a flag. A carved African statue imported from Haiti. Anthologies. Names they can’t tell apart. An amalgam of incomplete sentences. Pretty things.

For and against these cosmopolitas: this is my invitation.

Come visit for the poems. Not the beaches, not the umbrellas, not the negras sandungueras with a taste of paradise, not the clubs, not the old colonial forts: the best thing about this island is the poetry. If you come you should all know that of the innumerable inhabitants—innumerable like the many ways to say beautiful your island is beautiful your beaches yes yes umbrellas and you of course—more than three fourths have, at some point, considered writing a poem. Of this percentage, another fourth has written one, and, of that percentage, another fraction (more or less something likemmm) has edited said poem. This incalculable fraction includes some great poets, próceres that paint clouds, mountains and the beauty of Borinquen, so that you can enjoy the many things this island has to offer. It is unique in the Caribbean because it is a bridge of hope, because it implies without residue. It is, in fact, perfect because these poems only contain lo necesario for a for a local dish: a jíbaro, a donkey, a nostalgia, a field in the country, a patria, a bird, a tree, a woman that grows kids, a future that is a past, a few plantains, a song, a stream, a river, a height, a valley, a citizen-poet[2]…If you come you should visit our poetries. A bus will pick you up on a street two blocks from the hotel and will take you to el Yunque, the source of all the poems.[3]

…but don’t stop by the prisons, the police stations, the barrios, the pharmacies, the abandoned industrial sites, the rusty rails, the hospitals without beds, the empty lots with their innards of earth, the constructions in quotations, the universities with gates, guards, hallways, and batons; don’t go from Condado to Santurce; don’t bathe in a faraway river; don’t go where the houses fall off the roads; don’t see the churches, the kneelers, those that play at being possessed; don’t visit the cemeteries, the wardrobes, the arms, the armored, the inclinations against forts, the hands that increment toward the attack with their imprecise deities, the long lines between tight teeth, the pulled hair, the morusas curling in chests, the sweats and humidities of the room where I had that pain that one time, which we cured with saliva and some lemon…

Just access this here now: my words translated, translating themselves for you en buen inglés so that you then don’t have to see anything but my concrete manyness many times over, and of course don’t visit the following verses:

My sadness, that wet piece of cardboard that moans
against the wall;
that fusion of rain and dead tree,
that dog, lost in a forest of smoke,
that dirtied scrap of yellow news.

Marigloria Palma, la jevota, la megamujerota.[4] You don’t even know who the fuck she is.[5]

They say that when Julia came here she was hospitalized, broke because she was blacklisted for fighting for the independence of Puerto Rico, and that when she was in that hospital—filling out those forms one fills while getting ready for the eager indifference of the state—she wrote under occupation “poet”, and, of course (of course) the doctor crossed that out and wrote in its place that the patient suffered ¿delusions? Will you cross out these words in the air and when you leave say the patient suffers delusions that she is a poet?

Marigloria, where are you in the histories of the great próceres patrias? What hatred has raffled you to oblivion? What indifference? Why is it I only find one of your fourteen books? Why don’t they read you in all the classrooms, like swearing loyalty to a burnt flag? Where will I find the shame we lost when losing you? What are these customs that taste like a chévere and a dale? With what teeth will I arm my sadness? In what notebook will I hide to beg forgiveness without echoing all over?

I’m sorry. I forgot this piece is not for you, Marigloria. It was about them, for them, for you, who do know that the word repercutir means both to echo and to have repercussions. Who do not know that our word for jellyfish is aguavivas, and translates literally as water that is multiply living in the present.[6] Like me when I am home. For you who do not know that water, agua, in the caserios, is also a cry that means the cops are coming. They are like some waves that kill with their color. And we are like some people who are people, which also you do not know. You who do not know that I judge first in Spanish, but not just any Spanish, mine, my very own, the kind that makes the maker. Who do not know what cafre means. That cabrón can mean hundreds of things, but, in this context, if I say, Son unos cabrones, it only means one. You, poets, made of complexities I must of course come to understand with time; made of nuances I must work three lifetimes to acquire. I will be a third generation poeta, but a first generation poet. A que no sabes cuantas veces se me ha inundando el patio, hasta que me harto de la lluvia, aún cuando la amo. A que no sabes que no bailo salsa, que apenas bebo, que jangeo poco, que a muchos de mis panas les encanta Nietzsche, que fui líder durante dos huelgas[7], que cuando hace calor no voy a la playa porque me quedo en casa leyendo, que en mi cuarto se metieron varios ciempiés, y que a veces pronuncio mal los imperativos.

And because you don’t know this, I’ll give you this one-time offer, first-class flight to my otherness. If you watch me very closely you can kind of see it, what I have become for you and only you: an angry, feminist, Boricua, queer, identitarian bitch,[8] the kind that is so behind because she just can’t see how incredibly on my side you are. She will translate an old anger, one that precedes your encounter, one in which she is discovered on your land, perhaps taken hostage and perhaps shot. She will translate this anger into English. She will say, this is why Raquel was angry in Puerto Rico, among comrades of silence, let me help you understand her. She is my token to you, just as I am your token to you, and she will free you from the burden of pronouncing my name. 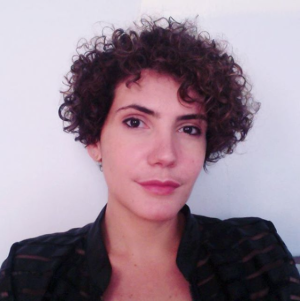 Raquel Salas-Rivera has published numerous poems and essays, most of which have been published in Puerto Rican poetry magazines. She has also published a poetry book titled Caneca de anhelos turbios, and will soon publish her second book, tierra intermitente.