Karen Yamashita has written five books, won The American Book Award, The Janet Heidinger Kafka Prize, and has been nominated for The National Book Award. So there’s that, but she’s also underground famous for entertaining writers and intellectuals from around the world when they pass through Santa Cruz, California, where she lives and teaches. The author Karen Joy Fowler chose the crab feast she attended at Karen Yamashita’s house when asked to describe the most memorable meal she ever ate. 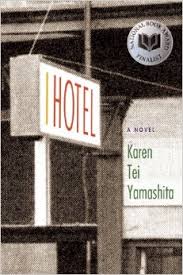 What’s the secret of Karen’s particular twinned brilliancies? In both cooking and writing, Karen is playful and experimental; she loves spectacle and cultural complications. She is a Japanese-American writer who lived in Brazil for many years. Her most recent novel, I Hotel, is about the yellow power movement in the 60’s and 70’s in San Francisco. Her original idea for I Hotel was to write about the renowned “Siamese” twins Chang and Eng, but the novel multiplied into something else. I Hotel, 610 pages, is illustrated with sly comics, proliferates with dozens of characters, ghosts, guns, politics, sex, love, war, music. It’s divided into ten novellas, but my favorite novella is “I-Migrant,” narrated by Felix, a Pilipino chef. He says, “Food is the basis for everything. Without food it’s all over. Kaput.” I love Felix because his belief in food reminds me so much of Karen’s. When Karen divides her advanced fiction classes into small groups, she divides them by carnivore, omnivore, and herbivore. She likes to divide things up neatly like that, to think conceptually: her novel Tropic of Orange was planned out on an excel spreadsheet, seven character’s/seven days. I Hotel is ten novellas, ten characters, ten years. Her dinners always have appetizers, salad, main course, dessert. So, a love of order, symmetry. But there’s always a surprise.

Her character Felix says, “What’s the story of the world? How come Magellan comes to bother folks like us in faraway islands? It’s to make their food taste better. Once you taste a secret you go running after your tongue. It can’t be helped.”

Because Karen is my colleague, my “sister in crime” as she calls it, I’ve had the great good luck of dining at her house many times over the years. Once, I arrive for a dinner party and there’s a pink Himalayan salt block steaming on the counter. Karen asks me to grill shrimp on it. Another time when I arrive she hands me a chipotle margarita. It’s sweet, but there’s that surprising jolt of smoky heat. She likes to cook her chicken on the grill, sitting on a beer can. Partly because it makes the meat so moist, but partly I think because it looks amusing, reclining on it’s lazy-boy Miller Lite in the middle of the grill, beer steaming up its insides. She hosts a spam potluck for a visitor from Hawaii. Someone brings sweet and sour spam, but Karen’s giant spam sushi wins the night.

Karen’s Thanksgiving: 20 people, two completely separate Turkey dinners. She says it’s to represent the Native people and the European invaders. One is an Italian inspired Turkey with porcini mushroom, sherry gravy and oregano herbed stuffing. The other is an open air grilled Turkey with corn bread stuffing. 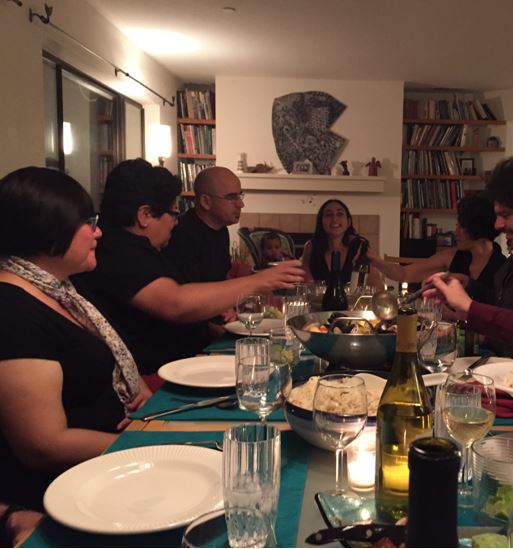 Felix: “Once you know this principle of the world, then everything becomes clear. You take Marx. You take Freud. You take Einstein. You take Suzuki. The politics of food. The sex of food. The relativity of food. The Zen of food. I tell these radical kids, eventually all the answers can be found in food. Are they listening? Follow the food.”

She makes it look easy, but she always has burns on her arms, wrists and hands. I Hotel took her ten years of research. That’s Gladwell’s ten thousand hours.

Last week when I arrive at a party to celebrate the end of the academic quarter, she teaches me to make Caipirinha, a Brazilian drink—chopped lime muddled with cane sugar, a generous shot of cachaca, a liquor made from sugarcane juice, then ice. 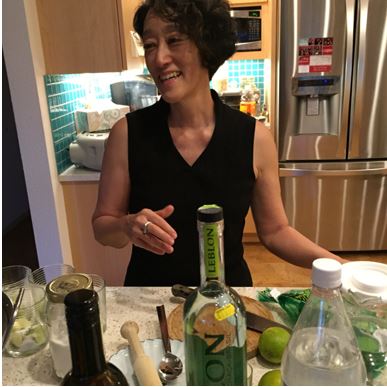 Once she sets me up to make the drinks for everyone, she goes back to working on her cheese puff appetizers. She’s an expert delegator, too. I pass out the drinks. She pops the cheese puffs in the oven.

She chats with her guests, sips on her drink, remembers her cheese puffs, pulls them out of the oven, a little burnt. She shrugs, laughs, drops them in baskets and hands them over to poet Ronaldo Wilson to pass about. Soon we sit down to a beet, palmetto, and asparagus salad in a yogurt dressing. Salad seconds come round. I warn people to pace themselves, but the fool-hearty first-timers take seconds of salad, pop those extra cheese puffs into their greedy maws. There’s great wine brought by Ronaldo Wilson and his partner, Dallas, who know wine. Karen isn’t picky about wine. When she goes to restaurants she always orders “red.” When the waiter asks what kind of red, she screws up her nose, shrugs, says, “You choose.”  Her favorite kind of wine is a local one, because they have a space ship on their logo. 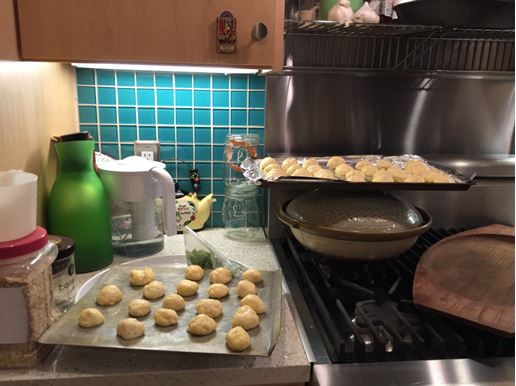 On our end of the table we’re talking about Kenneth Goldsmith, we’re talking about asexuality, we’re talking about The Brady Bunch. Then Latin American critic Juan Poblete helps Karen carry out three deep bowls from the kitchen. Rice with garlic and onion and twin muquecas, classic Brazilian stews, one with shellfish, mussels, clams and crab, and one vegetarian, with cauliflower and chickpeas. Karen sometimes grumbles a little about the high prevalence of vegetarians in California, but as she says, “I always feed my people.” Later, herbivore poet Javier Huerta will tell her it’s the best vegetarian meal he’s ever eaten. “I feel sorry for him,” Karen tells me. She also tells me the secret to the creamy but not heavy muqueca is coconut milk and palm oil. 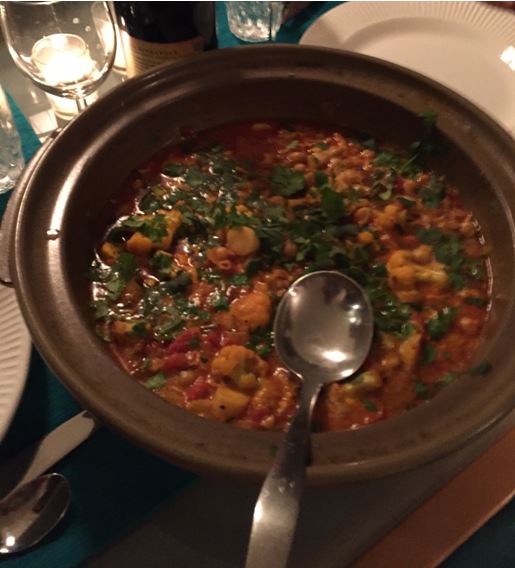 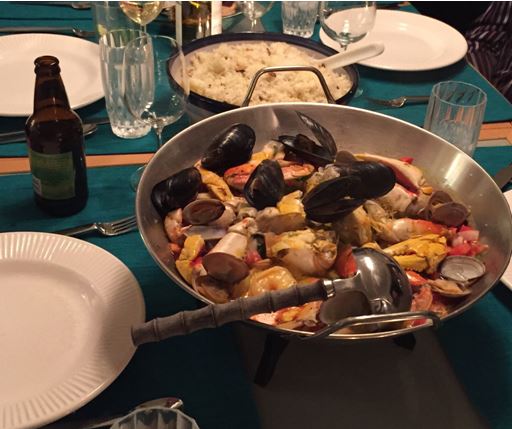 We eat and eat. We drink. We move from The Brady Bunch to The Monkeys and sing the theme song together. Someone begins to clear the table, but Karen says , “Wait.” She announces, “And now for the meat eaters.” She brings out a platter of tri-tip, perfectly cooked rare with a jalapeno rub resting on a mango and jalapeno salad. A whole second main course that I didn’t even see her cook. She says she made it for Juan Poblete, who grew up in Argentina. Perhaps part of the secret on the tongue is reckless abundance. Remember that I Hotel is 610 pages. We end with an apple tart and ice-cream. Afterwards, we do some shots of tequila that one of the guests brought, just to push us all completely over the edge. 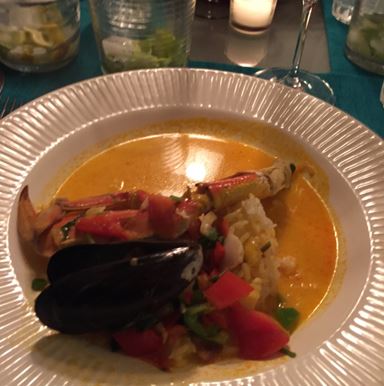 Towards the end of I-Migrant, Felix becomes the judge of an epic pig roast that takes place under a highway overpass. Two pigs—one whole roasted in a pit, one whole roasted on a spit. Which will be more delicious, pit or spit? Things go a little crazy. The spit pig catches on fire, the pit pig is a little over-cooked, but who cares? Felix says, “I watch the pork roast slip into hungry mouths. See the happy crunch of the burnt skin and the flaked feathers of meat slip away. Shiny grease coating every lip.” He deems it a “jubilant fiasco.” Neither Karen Yamashita’s cooking nor her writing are perfect, small French pastries. But that’s not what I think about when I think of Karen’s brilliance. With Karen, I think big. What’s the difference between a triumph and a fiasco anyway? Maybe the fiasco is more fun. Or maybe the secret is that they’re twins. That they are both the products of wild ambition. Nerve. Exuberance. Play. Risk. Fiasco, triumph, same thing if you add jubilance and twenty thousand hours. Like Felix says when he and his friends are writing a poem and cooking at the same time: “I got coconut milk. I got peanuts. Alfred throws in a carrot and a fishhead. He says, ‘Land. Sea.’ Devin checks the poem and tosses in a potato and some beans. ‘History. Prophecy.’ It goes on like that. Like chanting, we throw everything in: farmer, nomad, comedy, tragedy…young, old, women, men, son father, daughter, mother, brother, brother, sister, sister.” 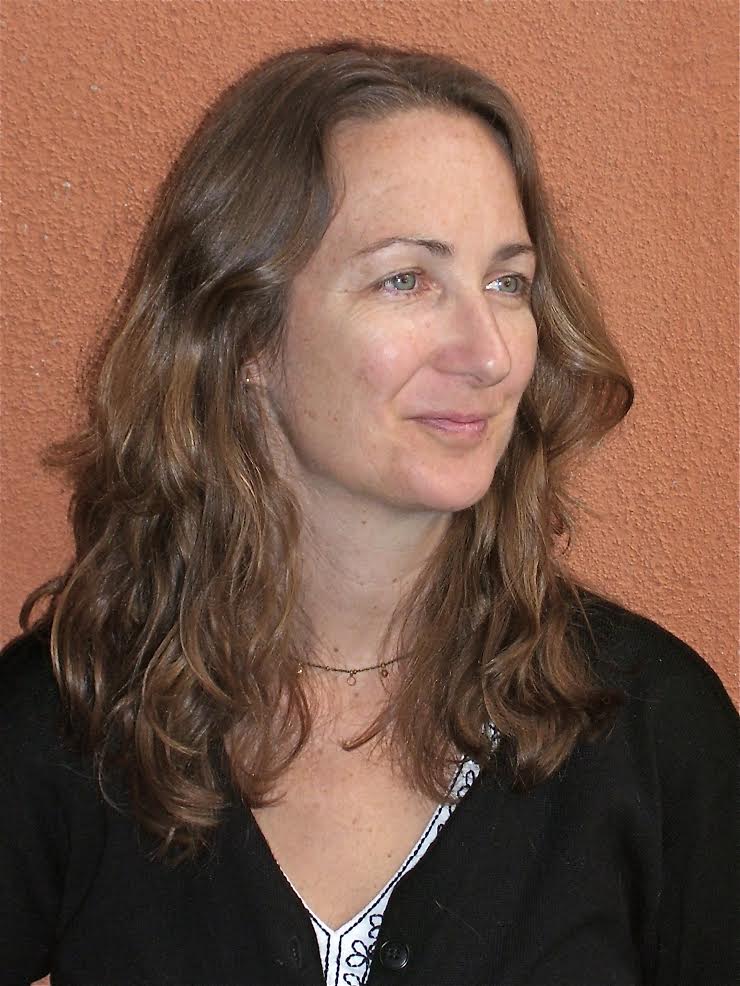 Micah Perks is the author of a novel, We Are Gathered Here, and a memoir, Pagan Time. Her short stories and essays have appeared in Epoch, Zyzzyva, Tin House, The Toast, OZY, and The Rumpus, among many journals and anthologies. Her short memoir, Alone In The Woods: Cheryl Strayed, My Daughter and Me, came out from Shebooks in 2013. She has won an NEA, four Pushcart Prize nominations, and the New Guard Machigonne 2014 Fiction Prize. She lives with her family in Santa Cruz where she co-directs the creative writing program at UCSC. More info and work at micahperks.com