Reports from the Field: Good Intentions: What Being Disabled at #AWP17 Was Like

I’m sitting at the booth for the literary magazine where I work for free but with great privilege when a woman approaches. She says she wants to thank us, me and my fiancé, we are the people in the chairs behind the table. She says she appreciates us, she works for the literary organization that runs this conference, and today is the last day. We are working a shift behind the table, she is maybe working a shift walking the rows. She seems to be going from booth to booth saying this thing about appreciating us to people who sit behind tables labeled with the names of various magazines.

We smile and nod. A lot of other people have worked shifts behind this table at other points during the weekend and I assume they were not told they are appreciated. I think my fiancé and I have great timing. The woman asks if we have had a good time at the conference, if anything has gone wrong. I say, Oh. I say, Well, I’m a part of the disability caucus, but I think you’ve already heard from us.

Her smile freezes but I don’t mean paralysis. She starts to look a little teary. She might be evaluating my body for signs of this weakness I’ve implied or maybe that’s just happening in my head. I’m making a non-joke about multiple sclerosis right now, the way that too is just happening in my head but that doesn’t make it less real. I’m making a joke only to myself. Now you feel like you’re in on it.

It is mostly surprising when she falls to her knees in front of the table. Now her face is a little lower than mine. She rests her arms on our table and her face on her arms. She looks sad. Like maybe I made her sad. She says she knows they’ve made mistakes. Her organization has made mistakes. She will say this to me here where it seems personal and intimate but her organization will probably not say this publicly. Later, my fiancé will say he appreciated the way she did not use passive phrasing, she didn’t say that awful thing, mistakes were made. This is true. She says something about how they’re going to try harder, I think she means she still appreciates me, us, my position behind this table, my place in  the caucus. I’m distracted, by the way she’s on her knees in a room where most bodies are either standing or in chairs. I haven’t seen other bodies in this bookfair room resting on their knees. Maybe I should be more open to new body positions. But I want to stand up, to tower over her. I wonder what would happen if I did that. I wonder if she would stay down there on the floor.

Instead of standing up, I stay seated. This seems to make more sense. Later, my fiancé will compliment me by saying I seemed very poised. Later, he will say he wanted to tell the woman that I could stand up, but he kept his mouth shut. I wanted to say it too, like I could stand if I wanted to, because I really do think she didn’t know. I think I wish neither of us wanted to say that, I think I wish to be more okay with being perceived as more disabled than I was at that moment. In the future, near or far or middle, I might not be able to stand up. In the past, my body has been trapped in beds. In the future,  the woman might be right about what she thinks my body can and cannot do. My disability is a disease that waxes and wanes, relapses and remits, is always felt if not always seen. I think she had really good intentions.

I think her organization probably had good intentions when they gave us a room on the first floor for the meeting of the disability caucus the night before, like maybe we wouldn’t need elevators at all and then we wouldn’t complain to them about all the ways in which the elevators were not ideal. But then in the room on the first floor, there was a level added: a stage with stairs. On the stage there was a table and behind the table was a row of chairs, so people could sit up there and tower over the rest of the room and say important things into the microphone. Someone built that stage, I kept thinking. Someone spent blood sweat tears to turn this one floor into two floors, and I wasn’t expecting them to also have built us an elevator, but we would have appreciated a ramp.

Instead, we had metal stairs. With metal railings. Metal chairs in rows on the carpet that are somehow hooked together, we had to lift each of them individually to unhook them. Those of us who could lift chairs lifted the chairs and freed them from each other. Perhaps this reminds you of confinement, of reliance on other bodies or structures or chairs. A few years ago I didn’t think critically about the term wheelchair-bound, I thought that term made sense. Now I know people use objects or devices or tools or languages to access the world. They use trigger warnings and prosthetics and automatic doors. I use some of those things too. Those things don’t trap us. A few years ago, I thought calling myself disabled might be like a surrender.

Now I have great poise and tell people I am a member of the disability caucus which they have probably heard from. Now I work very hard to not crack my poise open when during one small conference weekend: a woman stops by the table and says she writes flash fiction about people with autism and the ways in which they are socially awkward; my abled friends want to tell me about a party that was insane, a panel that was lame, a person outside the convention center who was driving like an idiot; a man stops by the table to sell us a product, but when I ask about accessibility he tells me the company he works for is compliant with that thing he can’t remember the name for but is the Americans with Disabilities Act; my friend tells me her mentor asked her why she decided to come to the meeting of the disability caucus; a woman falls down on her knees in front of me to tell me she and her organization are very sorry.

I told the woman who writes about people with autism that we aren’t really into flash fiction instead of we aren’t really into ableism. I don’t know if the fiction editors for the magazine where I work for free know much about ableism. They might be into it. The last story the magazine published included a character who called another character retarded and it was my job to put that story online. The last story my fiancé wrote included three metaphors for blindness and I made him take them all out. I am a part of the disability caucus and I imagine you have already heard from me or someone like me. Maybe you think we are pushy or poised or weird or socially awkward or fodder for flash fiction or nicer than you expected or compliant. When I say you heard from us, that implies that you can hear, which is in itself a little ableist.

The shift behind the table feels interminable. A shift is something like an hour and a half that a human can spend sitting behind a table like a barrier. A shift is a unit of time. A shift is also what happens in your brain when you start noticing the way language dismembers bodies by supposed accident, when you start noticing that the poets who talk about how deaf blind dumb they or their lovers once were are almost always able-bodied. The disability is a symbol, for poor choices, weakness, racism, misogyny, homophobia. Often, it is overcome. I have not yet encountered disability as a metaphor for ableism. And how many books with phantom limbs or sightless eyes in their titles have I turned over in bookfairs and bookstores, hoping to learn that the writer is like me, is a member of my same caucus? Instead, the jacket copy tells me the author has found the perfect metaphor. The metaphor is a body they don’t live in.

Sometimes I say crazy or idiot by accident, sometimes I say someone has a blind spot, like when they don’t know how ableist they’re being. I’m making a joke to myself about my mistakes that I have made but I might let you be in on it. What I’m saying is that this is a process that I too have journeyed through, and that journey is not yet over. If you need an invitation, let’s call this that thing, like I’m coming to you in text and I’m asking you to join in. This piece of text is a chair, a body, an elevator, or it is whatever metaphor you want it to be. It’s a staircase, it’s a bookfair, it’s flash fiction, it’s a stage that we’ll build and then take apart. Now work a shift with me. 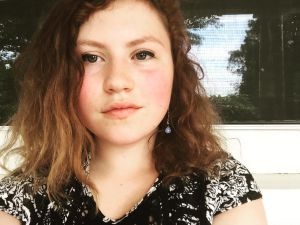 CADE LEEBRON is currently earning her MFA at The Ohio State University, where she works as an editor at The Journal. Her work has appeared in Electric Literature, The Deaf Poets Society, The Boiler, Day One, and elsewhere, and she recently founded the magazine Us For President. Find her online a www.mslifeisbestlife.com, or on Twitter @CadeyLadey