From the Margins: Women’s Writing and Unpaid Labor

You are here: Home / Archives / Featured / From the Margins: Women’s Writing and Unpaid Labor

We’ve been talking about women’s unpaid labor at least since the seventies, focusing the most attention on the domestic realm. Child-rearing, cooking, cleaning, folding laundry, hauling water: as of 2016, women globally still do double the amount men do. The conversation has lately extended to the realm of the workplace, especially around “emotional labor”: activities like mentoring younger employees, joining committees, or just keeping a smile on one’s face, disproportionately, and without much recognition, fall to women.

Philanthropists and economists recognize that the time women spend on unpaid domestic work, especially in developing countries, costs them time they could spend learning a trade or earning money. The emotional labor of the workplace, home, and public sphere has a different kind of cost: it adds value to our work, but, without being recognized as a “skill,” often doesn’t give us a competitive edge in the working world.

What does this mean for women writers? A lot of the work we do is unpaid, and plenty falls into the category of emotional labor. In addition to writing, we might mentor other writers, submit work to journals and agents, organize readings or volunteer as editors. With more than 200 MFA programs in the U.S., women surpassing men in education, and a deflated publishing industry, an increasing number of women writers are what I’ll call “writers and ____”: who, lacking financial support from an institution or a family member, effectively take on another career to support their writing. Some of these writers may also be full-time parents instead of, or in addition to, entering the work force. Recently, I spoke to three such women – K., S., and G., kept anonymous to protect their privacy – about prioritizing writing, what they classify as “work,” and how American associations between career and identity impact their ideas of themselves as writers.

Writing as art can be what economists call a “non-market” activity. The time we spend writing poems or novels, like the time we spend doing laundry, is usually time not spent earning a dollar, even if we hope to see payment for that work down the line. But unlike domestic work, it can be difficult to convince others of its value, at least until we publish widely or earn our sole income from it. The value of writing and the training or talent that enables us to do it can also, like emotional labor, be openly devalued or dismissed. G. tells me that introducing herself as a writer sometimes prompts people to demand to know if she makes money doing it, as an attempt to determine whether she and her work are owed respect. Both G. and S. recall encountering people who think that anyone can write, perhaps because unlike other arts, all literate people have access to the building blocks of writing. This belief is compounded if the writer in question is a woman, more so a woman of color, even more so if one is also young. Others, says S., seem to believe that only a few geniuses (usually men) can write. For many, there is no writing equivalent to the steady BBC series actor: the workaday writer, not necessarily a star, who has nevertheless been trained thoroughly for her vocation. All three writers I spoke to felt that many people had trouble processing the idea that what they considered their vocation could also be the work for which they earned the least money.

All the writers I spoke with have day jobs, which contribute in different degrees to their total household income. S., whose first book comes out this year, is a parent who currently earns her family’s sole salary as a university instructor. G. works in education, is single and lives on her own, and is about to publish her first novel. K., whose partner’s job relocated them to a small Southern city, works part time in a law office and gets paid for freelance writing and editing while she works on her fiction. They’ve all achieved various degrees of success with their writing, but economically it still qualifies as a secondary occupation or non-market activity when compared to their day jobs.

I asked them: how do we assign value to our writing when so many factors push us to weigh our paid and care giving responsibilities more heavily? The hierarchy of such valuations, I know, can be reflected in something as simple as a schedule: in my own life, I feel best when I wake up early and devote an hour to writing, or even scribble notes for a poem during my commute, yet the pressure to forgo this focus and get to the job that pays my rent is often intense. If I am worried about work, days can go by in which the value of my time is measured only in payable hours, plus exercise, laundry, dinners, and sleep. As a thirty-year-old, that’s not out of line with the preoccupations of my generation, one that’s sharply aware, as K. put it, that “everyone’s labor – including that of white collar professionals – is being devalued very, very quickly.” The cost of living in the U.S., she argued, is so high – and the gulf of inequality so great – that to live on the margins of society in order to make art is no longer an option. If Patti Smith had been a twenty-something in 2016 her future memoir might have been called Just Paralegals instead of Just Kids.

Yet I heard from these women again and again that they assigned the greatest value possible to their writing precisely because they were aware no one else would do so, and because writing is real work. This valuation, unconsidered by the market, can instead be measured in terms of time, emotional energy, curiosity, focus, exchange of ideas: elements women know have essential currency in their lives. Even while raising a toddler, S. gets up to write in the mornings before her teaching job. That her writing is the labor of least immediate need – if she didn’t do it, her family wouldn’t go hungry or become homeless – doesn’t push it to the end of the to-do list. G. told me that she “tries not to compromise for anyone,” which means that writing trumps hanging with friends. K., who turned to freelance writing and editing after failing to find steady work in her new city, says that although she is apt to prioritize nonfiction assignments that pay, her fiction is what has “long-term value” for her: she hopes to get paid for it someday, but in the meantime she likes to remember that the value of writing is ultimately measured by the impact it has. “You don’t know where words will go,” she said, especially given the democratic access made possible by the Internet.

In 1938, writing Three Guineas, Virginia Woolf bemoaned to her imaginary correspondent the fact that in order for women to receive an education that would allow them to earn a living, already a struggle, they had to subject themselves to the very values of competition and domination they hoped to escape by wriggling out from the financial grips of men. Women who have the education and privilege to earn their own money and spend it on time devoted to non-market creative production are in some ways acting out Woolf’s dream. Every time we sit down to write, often in the economic margins of our own lives, we choose ourselves and our work over activities whose value has been set by others. Simultaneously, we determine a value scale for our writing that’s different from the one set by a magazine’s pay rates, a tenure committee, or the book-buying public.

This value scale is reflected in women’s goals for their writing. When I asked the women I spoke with about the endgame of their work, their responses were civic and existential, not just commercial: to create books people read and want to talk about, to exchange ideas, to make beautiful things. Not that we should knock commerce: for women especially, the passive income that can come from a successful book is yet another way of establishing the fiscal independence that can lead to cultural influence with fewer strings attached.

Woolf would enjoy this above all about the growing cadre of female “writers and _____.” We have found a way to continue our own education, and each other’s, by creating work that exists somewhat outside the economic influence of a society where we still only count sometimes. Our society sends women a gloppy salad of mixed messages: extolling mothers while denying them paid family leave, encouraging creativity only when it’s applied to saleable products, and keeping the cost of education high enough that students can barely afford to exchange ideas for fear of losing the job opportunity that pays their loans back. Amid all of that noise, we’ve still managed to create spaces – an hour here, an afternoon there – where only our work and its impact matter. But nothing comes from nothing: the ability to do that is a natural extension of our ability to participate in the labor force at all. As Woolf put it, once a woman earns her own money, “she can declare her genuine likes and dislikes. In short, she need not acquiesce; she can criticize. At last she is in possession of an influence that is disinterested.” Criticizing and influencing now means something more than writing alone in a room: somewhere in that zone of fiscal and ideological independence, we have to take seriously our responsibility to value our work – and each other – loudly, especially when others won’t. 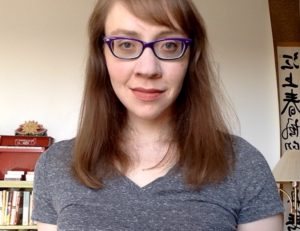 LEAH FALK’s poems and essays have appeared or are forthcoming in The Kenyon Review, Blackbird, FIELD, Los Angeles Review of Books, The Awl, and elsewhere. Also a librettist, she most recently collaborated on the song cycle Book of Questions with composer Joshua Morris.